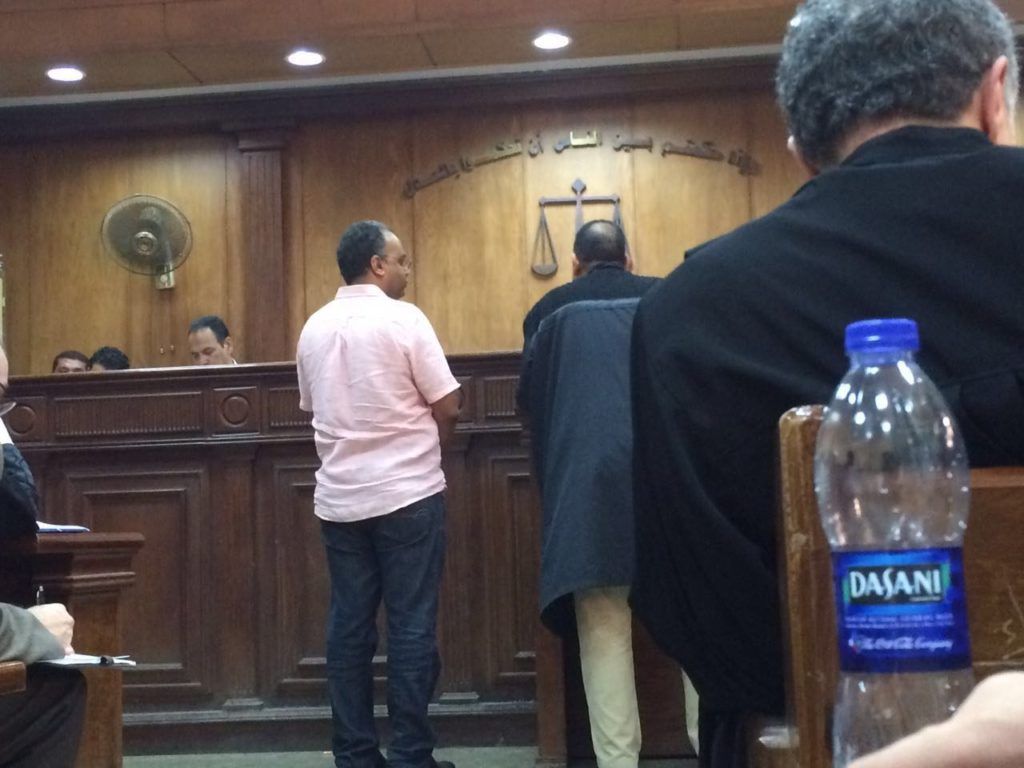 The defendants are part of a 2011 case accusing a number of NGOs of illegally receiving foreign funding. The case was reopened in March when the state-owned Middle East News Agency reported that Cairo Criminal Court was due to review a ruling to freeze the assets of four defendants, including Bahgat and Eid.

During the May hearing, an investigative judge recommended that the assets of four additional people be frozen: Bahey Eddin Hassan — founder of the Cairo Institute for Human Rights Studies, as well as another employee at the center; Mostafa Hassan — administrative assistant at the Hisham Mubarak Law Center, and Abdel Hafez Tayel — head of the Egyptian Center for Right to Education.

During Monday’s court session, defense lawyers asked Bahgat about the nature of his work and the source of financial transfers he received. Bahgat said he received payment for working as a researcher and translator, clarifying that he had not received any transfers from foreign countries.

Bahgat added that he wasn’t summoned for investigation concerning his financial transfers and is willing to submit contracts of his work to the court.

Defense lawyers agreed that Article 208 (a) of Egypt’s criminal procedures law stipulates there should be enough evidence to open such a case, and that it should be placed under the jurisdiction of the general prosecutor or someone he mandates, not an investigations judge.

Lawyers also argued that receiving transfers from abroad, as testimonies from a National Security Agency officer and a Societe Generale Bank employee indicated, is not a crime in itself.

Lawyer Negad al-Boraie said there is no such thing as “funding,” adding that there are agreements and donations. “If we criminalize receiving funds, this will harm Egypt and investment, not civil society,” he asserted.

Defense lawyers added that the amount of money transferred to the defendants is very small: US$8,000 to Bahgat between 2007 and 2011, and US$10,000 to Eid, which they argued does not pose a threat to national security.

They added that an asset freeze is a penalty in itself, which contradicts the presumption that the defendants are innocent until proven guilty, and infringes on private property rights.

Borai argued that Tayel, from the Egyptian Center for Right to Education, used the money to establish an independent syndicate, which is a right guaranteed under the constitution. Investigations reportedly revealed he used the money to “thwart state efforts in education,” Borai said, sarcastically adding that he is not aware of the state’s said “efforts” in this field.

According to Maha Youssef, a lawyer representing Hassan from the Hisham Mubarak Law Center, investigations revealed that her client cashed checks belonging to his employer, which she said is his job. She added that Hassan has now left the center, providing proof of the termination of his contract.

The case has previously been adjourned three times, once to April 20, and again on May 23, July 17, and August 15.

During the last session, lawyers had requested to review the case documents. Eid told Mada Masr that the documents showed “fabrication to the extent of forgery,” presenting charges that implicate the defendants for receiving funds from the Committee to Protect Journalists (CPJ), which he added is not even a donor.

The foreign funding case dates back to 2011 when 43 workers from foreign NGOs were charged with operating an organization and receiving funds without a license. In 2013, all the defendants, including 17 US citizens, received sentences ranging from one to five years in prison. Many of the defendants received the charges in absentia.

The case also resulted in the closure of several NGOs, including the International Republican Institute, the National Democratic Institute and Freedom House. However, legal proceedings against Egyptian NGOs implicated in the case were unresolved.

Bahgat is the founder of the Egyptian Initiative for Personal Rights (EIPR) and Eid is the director of the Arab Network for Human Rights Information (ANHRI). Both Gamal and Eid were banned from travel in February as they attempted to board international flights, but they were not informed whether they faced criminal charges at the time.