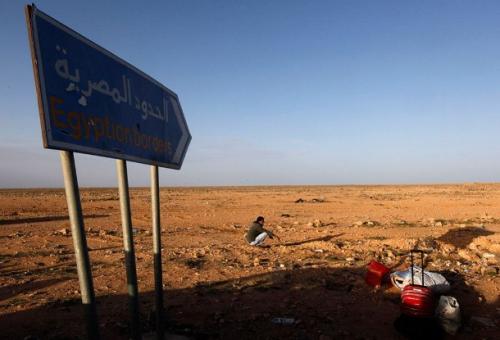 The 23 Egyptian workers who were abducted at gunpoint in Libya earlier in the week crossed over the neighboring countries’ border to return to Egypt after they were released earlier Friday.

Unidentified assailants kidnapped the group on Sunday in the northeastern town of Marsa al-Brega, located approximately 200 kilometers west of Libya’s second largest city of Benghazi, as their three-car convoy traveled eastward toward Egypt.

In interviews broadcast on state TV, the workers said they had been blindfolded and beaten by their captors, who reportedly were seeking a ransom. The television report attributed their release to Sisi’s “instructions” to the relevant authorities in coordination with Libyan counterparts.

The workers thanked the General Intelligence Services, Sisi and the Libyan authorities for efforts to secure their release, while also stating they will not leave Egypt again.

Shaaban Mohamed, one of the men kidnapped who is originally from Mansoura, told the television broadcaster that circumstances compelled him to work in Libya, but he advised others not to leave their country.

“Your country wants you,” Mohamed said.

Saber Farouk, another one of the men who is from Kafr al-Sheikh, stated he had been working in Libya for two years but will not return.

Matrouh Governor Alaa Abu Zeid phoned into the broadcast to urge young Egyptians to heed the Foreign Ministry’s travel warnings for Libyan, asserting that job opportunities in Egypt are abundant.

“We said over and over, why would you expose yourself to such danger?” he asked.

“You don’t have to start [your career] as a manager sitting on a desk,” he said addressing Egyptians who seek employment in Libya. “We have to change this culture.”

The numbers of Egyptian nationals currently working or residing in Libya is unknown. However, the Foriegn Ministry has repeatedly warned its citizens to avoid non-essential travel to the country, particularly to areas witnessing political tension, armed conflict or unstable security conditions amid the absence of diplomatic representation in Libya.

The Foreign Ministry had not issued an official statement on the matter earlier in the week, even after news of their kidnapping spread. However, an unnamed source from the ministry told media outlets that the ministry “will ascertain whether the incident is a case of abduction or detention,” as the exact circumstances were unclear. The source noted that there are “dozens of Egyptians who are detained on a daily basis due to their attempted efforts at illegal migration,” while many others are detained “for working in Libya without visas or work permits.”

Topics
Related
Egyptians in Libya
23 expatriate Egyptian workers abducted by armed elements in Libya
Unidentified assailants abducted a group of 23 expatriate Egyptian workers at gunpoint on Sunday, as
Egyptians in Libya
Foreign Ministry to families of kidnapped workers in Libya: If you get any updates, let us know
Relatives of those missing in Egypt are not getting much help, leaving them vulnerable to scams and an
Egypt-Libya relations
Libya: The battlefield of the New Arab Cold War
Vijay Prashad | Libya’s “Islamic State” executed 21 Coptic workers from Upper Egypt. These workers are among the