As relations warm, a new Israeli ambassador arrives in Cairo
By
Mada Masr 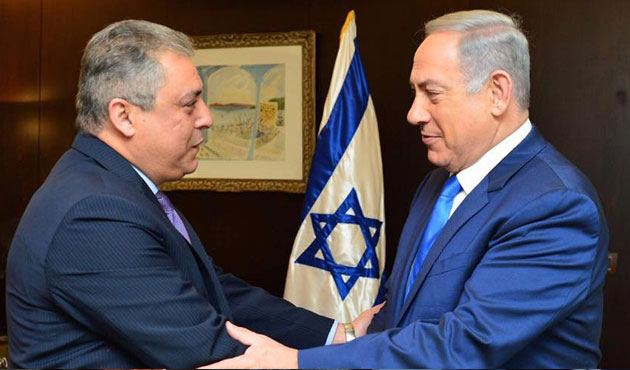 Israel’s new ambassador to Egypt David Govrin arrived in Cairo on Sunday to take up his post, replacing former ambassador Haim Koren, who held the post for two years.

Govrin’s appointment comes amid warming Israeli-Egyptian relations. While popular sentiment in Egypt remains hostile to Israel and official relations cooled in the aftermath of the Arab Spring, the two governments have recently moved closer.

In September 2015, the Israeli Embassy in Cairo reopened after a four-year closure, prompted by demonstrators surrounding and breaking into the embassy building in Giza. In January 2016, Egypt sent an ambassador to Tel Aviv for the first time since 2012, when then-President Mohamed Morsi withdrew his ambassador in reaction to an Israeli offensive on Gaza.

Shoukry’s visit followed a May speech, in which Egyptian President Abdel Fattah al-Sisi called on Palestinians and Israelis to seek reconciliation, and said Egypt is willing to play a part in reaching a resolution.

Public statements from Shoukry and Netanyahu focused on the Palestinian issue, but some analysts have suggested each party had additional motives for meeting.

Foreign Policy expert Nayel Shama told Mada Masr the meeting will serve as valuable diplomatic capital for Egypt, while the peace initiative is an opportunity to market Egyptian diplomacy as a powerful regional player that continues to hold important influence.

Shama also suggests that Egypt might be seeking Israeli mediation with Ethiopia on the Renaissance Dam.

From Israel’s perspective, a rapprochement with Egypt opens the door to wider normalization with other Arab countries like Saudi Arabia, Shama says.

Others question the sincerity of the peace initiative, in light of Israel’s recent rejection of a similar proposal from France. “It is unclear whether the Egyptian visit is genuine, or whether it is an Egyptian-Israeli alignment to confront European and American interventions,” said Israeli journalist Naom Sheizaf of +972 Magazine last week.

It is not yet clear what Govrin’s appointment will mean for Egypt-Israel relations.

Govrin is reportedly a fluent Arabic speaker, and has conducted academic work on the Arab region. His PhD dissertation at the Hebrew University of Jerusalem focused on the so-called “new Arab Liberals,” including Egypt’s Abdel Moneim Said, Osama al-Ghazali Harb, Hala Mostafa, Saad Eddin Ibrahim, Said al-Naggar and Tarek Heggy. His dissertation was expanded into a 2014 book titled, “The Journey to the Arab Spring: The Ideological Roots of the Middle East Upheaval in Arab Liberal Thought.”

Govrin argues that these intellectuals shifted focus away from foreign factors like Israel and the West, focusing instead on domestic problems. “The Liberals present a rational alternative based on self-criticism and accountability, in order to confront better the political, economic, social-cultural challenges of the modern Arab state,” Govrin writes in a summary of his findings.

He celebrates these intellectuals for their “extraordinary vitality” and positions their worldview as “the only ideological alternative to that of the Islamic movements.” The Arab Spring, he argues, relied upon a strong ideological basis that was laid down and developed by the new Liberals in the last three decades.

Topics
Related
2015 Parliament
MP Tawfiq Okasha investigated for hosting Israeli ambassador
A special parliamentary committee has been tasked with investigating member of parliament Tawfiq Okasha’s
Egypt-Israel relations
Israeli Embassy in Cairo reopens after four years of closure
The Israeli Embassy in Cairo has reopened, after being closed for four years, the official spokesperson