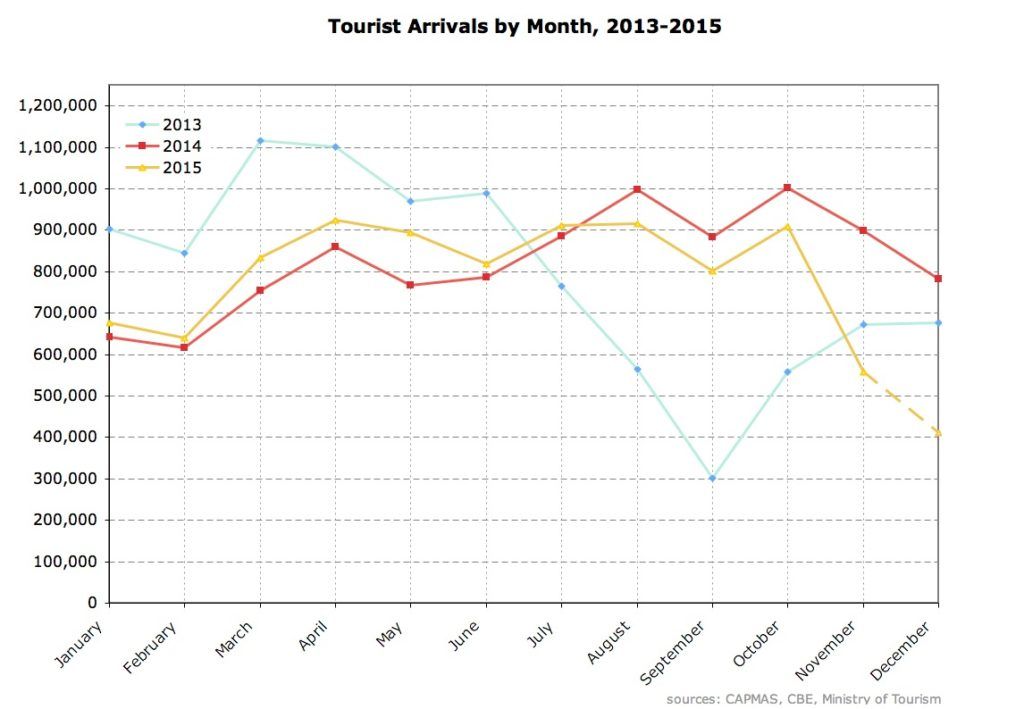 Tourist arrivals to Egypt declined by 51.7 percent year-on-year in May, with just 431,800 visitors compared to 894,600 in the same month last year, according to the latest figures from state statistics agency CAPMAS.

Visitors also spent less time in the country. Egypt recorded only 2.5 million tourist nights during the month, down by 71.4 percent compared to May 2015.

May’s dismal numbers follow a string of weak months for the industry. April arrivals were down by 54 percent year-on-year.

As a result, tourism revenue is in a major slump, amounting to just US$550.5 million in the first quarter of 2016 — a drop of more than 62 percent compared to the same period in 2015, according to Central Bank figures.

For the first time, more tourist dollars flowed out of the country than came in, with Egyptians spending some $1.2 billion on outbound travel during the quarter.

Tourism in Egypt has been hit hard by a series of disasters. The October 2015 crash of a Russian airliner over the Sinai Peninsula led many countries to impose flight bans due to concerns by foreign governments that lax security in Egyptian airports had allowed an explosive device to be smuggled onboard.

Much of the decline in arrivals is due to the absence of Russian and other Eastern European tourists, formerly the largest group of visitors to Egypt. With a Russian flight ban still in place, the number of Russian tourists fell 61.3 percent compared to already weak figures in the same month last year.

Other incidents — including the September 2015 killing by the military of a group of Mexican tourists in the Western desert, the March hijacking of an EgyptAir flight, and the deadly May crash of another EgyptAir flight, as well as the torture and murder of Italian researcher Giulio Regeni — have also prompted tourists to stay away.

Topics
Related
boat incidents
Nile boat crash kills 4 Pakistani tourists in Cairo
Survivors' reports indicate that they were taking a walk along the Nile when they decided to take a ride
El Gouna
Can a flailing tourism industry lure green travelers?
Isabel Esterman | “If you’re going to stick a sticker saying 'please save water', I don't see that it will make a difference.”