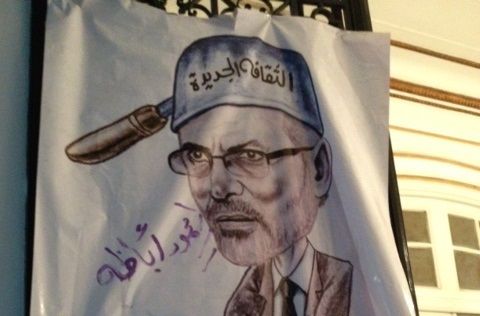 On June 5, 2013, a group of intellectuals organizing around “a rejection of the Islamization of the state” began an open-ended sit-in. Angry and imposing, they occupied the Ministry of Culture building in Zamalek to prevent Muslim Brotherhood-affiliated Culture Minister Alaa Abdel Azizi from entering.

Dozens of writers, artists and young intellectuals occupied the ministry, while others joined daily to create a festive atmosphere on Shagaret al-Dorr Street, where the ministry is located. They hosted art events and attracted wide local and international media coverage.

Abdel Azizi had made some changes within the ministry and issued some statements, and the cultural community felt threatened.

This was about one year after former President Mohamed Morsi was elected, and there were thousands of endorsements for the Tamarod petition that was calling for the overthrow of Morsi and his Islamist government on June 30.

On that day, huge marches moved from several locations in Cairo toward Tahrir Square and the Ettehadiya Presidential Palace, among them a group of writers marching from the Ministry of Culture.

On July 3, as people mobilized in public squares, Minister of Defense Abdel Fattah al-Sisi intervened to announce the end of the Brotherhood’s rule. Morsi was arrested and judge Adly Mansour was appointed interim president for a transitional period. Later, in June 2014, Sisi became president himself.

Mada Masr spoke to some writers and artists who took part in the sit-in about their trajectory from supporting the June 30 movement against the Brotherhood, then to realizing the dangers in its aftermath, and living its consequences today.

Some people refused to comment – and interestingly, finding prominent female cultural figures who had supported the sit-in but since changed their minds proved difficult.

“We were convinced that to control the state you must control the media, education and culture,” says producer Mohamed El Adl, one of the prominent figures behind the sit-in. “The Brotherhood appointed Brotherhood ministers in the ministries of education and media. When they appointed a Brotherhood member [in the culture ministry] we had to stop this encroachment, after he decided to remove the head of the Public Book Authority and replace him with one of their members.”

“[Screenwriter] Sayed Fouad, [filmmaker] Khaled Yusef and I decided to protest in a practical manner. We invited 15 older and renowned figures at the beginning, to avoid being described as kids, and we made a plan to quietly break into the ministry,” he says. “We then announced to the media that we had occupied it.”

Painter Mohamed Abla says he was one of the first people to join the sit-in, which was organized because people felt threatened by the new minister and that the ministry was taking a dark turn.

“We were aware we were doing something big,” says Abla. “When people started to arrive and express support it was evident that the sense of danger was a general feeling, especially when they sent groups to threaten the sit-in.”

The danger manifested in the dismissal of some cultural periodicals’ editors and leaks from the National Archives that the Brotherhood wished to falsify some historical documents about the group, according to Mohamed Hashem, the director of the publisher Merit, also present at the sit-in.

Young poet Michael Adel, who joined the sit-in, says some artistic activities were banned under the Brotherhood, who appointed a minister to execute their project of effacing cultural identity and controlling the arts.

“We were targeting that project,” Adel says. “I was moved by a fear that on treating our wounds in January 2011, we opened them even further, reaching a stage where a certain type of clothes would be haram, singing would be haram, and individuals would be liquidated, especially as the Islamists sought to rule over revolutionaries’ bodies.”

Sayed Mahmoud, journalist and editor in chief of Al-Qahira newspaper, was present to cover the sit-in, which arguably gave him enough distance for an analytical view.

“I was convinced that the minister was not a Brotherhood member but a tool in their hands,” he says. “He believed he was purifying the ministry from supporters of the former minister, Farouk Hosni. When he expelled three ministry leaders, this confirmed intellectuals’ impression that the state was being Islamized.”

Mahmoud says, “Although the sit-in was not a popular one, popular artistic and intellectual faces appeared daily on television and that gave the sit-in a popular outlook.”

He adds that the protesters did not come together over common ideas — participants included interest groups, intellectuals associated with the revolution, and people who really felt their cultural identity was under threat.

Some people in the arts refused to participate, he points out, because they felt the sit-in was in the interests of certain cultural figures belonging to the pre-revolution regime of Hosni Mubarak.

Hashem confirms this: “The state was in favor of the sit-in because they wanted to remove the Brotherhood. Some protesters did gain later on and became ministry consultants, and some were writers who unconditionally supported the regime and now still keep silent about the oppression of young people.”

For these participants in the sit-in, disillusionment arrived at different points.

For Abla, June 30 was a beautiful and important day, and he didn’t pay attention to any other details because everybody seemed in agreement about a specific objective. A few months later, Abla was chosen to join the 50-member committee to draft Egypt’s new constitution. He was enthusiastic and felt he was participating in something important. The road map was not clear to him yet — he thought it was an opportunity to shape Egypt’s political and cultural map, but eventually realized that the committee involved certain political alliances and that the military had made pacts to remain in charge. He still believes the Constitution largely came out well; although, perhaps it could have been better.

“When the Constitution began to be violated I felt hurt and bitter, because we made an effort to draft applicable provisions,” he says. “But by the beginning of 2014, violations of the Constitution, public freedoms and the press were widespread and people were being jailed because of their opinions.”

Adel had confidence at the beginning of the June 30 mobilization because some opposition leaders were involved. He believed that the intellectual and political elite had a duty to negotiate to make the new regime better, but they gradually left the scene — except those allied with the state.

For Adel, the definite turning point was in December 2013. A few months earlier he had been chosen to join the youth committee at the Higher Council for Culture, but when fellow activist and poet Ahmed Douma was arrested and the ministry did not react, Adel and others resigned to protest the silence.

Mahmoud believes that contradictions inside the intellectual elite were there before June 30 and only came to the surface when Sisi was elected president. Nationalists inside the cultural community supported Sisi as a better representation of their national identity and a popular leader, in a moment that reclaimed the 1960s and Gamal Abdel Nasser’s Egypt, despite Sisi’s politics resembling Anwar Sadat’s more than Nasser’s.

He also believes that the Brotherhood’s mistakes led this to happen.

The turning point for Mahmoud and many others started earlier, with the exclusion or withdrawal of democracy advocates from the political process after security forces violently dispersed the pro-Muslim Brotherhood Rabea al-Adaweya sit-in in August 2013. It was then that the dangers of the new authority were sensed.

Adel cynically describes the current regime as consisting of the president, the government and (state and military supporting media figure) Mostafa Bakry, with a total absence of democrats.

Abla sees no difference between the Islamist government and the current military one, as both are autocratic and intolerant of different opinions. Intellectuals and other citizens feel frustrated because they have no role to play in their own futures or that of their country.

“Right now, it is we who have been ousted,” Abla says. “The situation is worse than three years ago, because the door is closed on imagination. Now they defeat even any vision of a resistance because prison is the only option, in a country mostly populated by young people.”

Hashem says there is currently no space to maneuver, which is driving people to frustration, withdrawal or madness.

“Anything that the Brotherhood would have done, the current state is doing. The religious and military regimes are two faces of the same coin. Both depend on oppression and they oppose freedoms and social justice,” he says.

Mahmoud believes the Brotherhood instilled fear in Egyptian society, but there was still enough revolutionary spirit to oust them. Later, though, all parties participating in their ousting were punished.

“The current regime militarizes itself by seeking the aid of the army, using a command mentality in the absence of any space for thought or critical dialogue,” Mahmoud says.

El Adl does not question the current regime’s patriotism or legitimacy, but he feels that those in charge lack political experience and the situation in the country exceeds their mental capacities.

He adds that the current state considers everybody who thinks differently a national enemy, and it favors religious institutions with Wahabi tendencies.

Frustrations with the current regime extend to the specific site of cultural practice.

Hashem believes the security crackdown on Merit and Townhouse gallery six months ago was aimed at “breaking peoples’ backs for several years to come.”

Without freedoms, there’s no space for cultural activities, he says, so the state is encouraging people to resort to mosques. Writers have been put in prison, he points out, including Ahmed Naji, without any real resistance from the cultural community.

According to Abla, the current culture minister has no cultural plans and the state is focused on collecting donations from the people rather than encouraging activities in cinemas and theaters, which have become sparse.

Civil society cultural initiatives that have taken on the state’s role, such as the Sawiris Literature Award or Marianne Khoury’s Zawya cinema project, according to El Adl, are hindered by the state, which considers culture a luxury and fails to see its soft role in fighting terrorism.

Mahmoud describes the current arts scene as extremely weak. Culture has become “a non actor,” and tends toward the carnivalesque rather than any reflection of clear cultural policies.

Adel explains that cultural figures are either with the state or criticize the government without extending their scope to Sisi, unrealistically relieving him of responsibility. At the ministerial level, many projects fail to be implemented, while money pours into the pockets of the corrupt and high positions are only given to government supporters.

Any opposition or enlightened intellectual is put in prison, Mahmoud says. In short: “the cultural scene at present is in prison.”

AD
You Might Have Missed
What we talk about when we talk about trees
Mugamma revisited: Reimagining the building and the square
Where do old lesbians go to die?
Carbon Colonies & A Green New Deal
AD
Hadeer El-Mahdawy
55 articles on Mada

Topics
Related
independent arts
Against helplessness in the arts
Mia Jankowicz | As soon as we give in to the idea that we are nothing but private citizens we’ve given up 99 percent
budget
Weekly spotlight on state culture: The Culture Ministry speaks up
Mai Elwakil | Supporting local creative production and public access to the arts is a difficult task, Culture Minister
Al Mawred Al Thaqafy
Culture, the state, and the culture of the state
I thought it appropriate to start this article with an excerpt from a poem by the famous Palestinian
Alaa Abdel Aziz
Inside the Culture Ministry
Maha ElNabawi | “We still need to protest, but we also urgently need members of the cultural sector to begin to actively