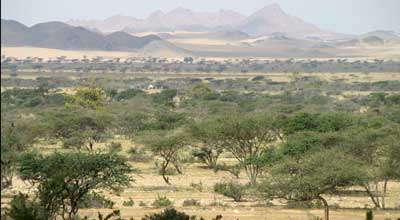 In a rare verdict, three Saudi Arabian citizens and their Egyptian driver were sentenced to life in prison on Tuesday after a court found them guilty of illegal hunting in Gebel Elba natural protectorate.

The Saudi hunters fled the country, with the prosecutor general adding them to watch lists at airports and border crossings nationwide.

The illegal hunt threatened the delicate ecosystem of the protectorate, according to the court. The Saudi hunters reportedly killed a Barbary Sheep and took its head as a trophy. They also killed gazelles and hares for their flesh, fur and hide.

Illegal hunting in the Gebel Elba protectorate dates back to August 2014, according to an article published by Al-Masry Al-Youm previously.

Located around 1,300 kilometers southeast of Cairo, along Egypt’s Red Sea border with Sudan, Gebel Elba was officially declared a national protectorate in 1986. According to the Ministry of Environmental Affairs, this 35,600 square kilometer natural park is home to several different species of rare and endangered mammals, birds and reptiles.

Last month a group of 12 Saudis and one Kuwaiti were apprehended while hunting rare animal species with firearms in Wadi al-Alaqi natural protectorate in Aswan governorate. Two Egyptian guides and drivers accompanying them were also detained.

Park rangers and nature conservationists told Mada Masr previously that prison sentences are very rarely issued against illegal hunters. Tuesday’s sentence of life imprisonment is perhaps the harshest ever issued, but may still be appealed.

Gulf hunters frequently post photos and videos of their illegal expeditions in Egypt.

One of Egypt’s most renowned natural protectorates is also under threat following an agreement between the Kingdom of Saudi Arabia and the Egyptian government, after President Abdel Fattah al-Sisi agreed to the controversial transfer of two uninhabited Red Sea Islands – Tiran and Sanafir – both associated with the Ras Mohammed Natural Marine Protectorate.

If finalized, this executive decision will decrease the area of Egypt’s natural protectorates by over 110 square kilometers.

The deal has been a controversial move, as the islands have been administered by Egypt for several decades and fought-over with Israel, although they may have previously been officially part of Saudi Arabia’s national maritime borders.

Note: This article previously made reference to Bighorn Ram in Gebel Elba, but has been changed to Barbary Sheep after clarification.