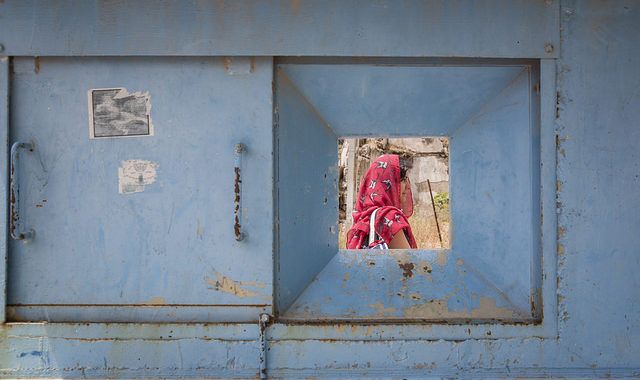 The ninth Palestinian Festival of Literature (PalFest) starts on May 21 and lasts until May 26. Through organizing free public literary events by a range of international writers in Ramallah, Jerusalem, Haifa and Nablus, it annually breaks the cultural siege imposed on Palestine by the Israeli occupation.

Lina Attalah: What are the spaces and who are the groups you work with in Palestine, across the different cities you’re visiting during these six days?

Yasmin El-Rifae: It’s a mix of arts and culture spaces, municipal gardens, NGOs, and collectives. This year, we’re starting in Ramallah with an opening event at the Ottoman Court, an outdoor auditorium in the old part of the city. The following night we’ll be at Dar Issaf al-Nashashibi, an arts and culture space set in a historic house in East Jerusalem. The next morning we visit Al-Aqsa and meet with Ray Dolphin from UN OCHA, who’s an expert on the wall, among many other facets of the occupation. We’re partnering up with Bethlehem University for an event there.

From Bethlehem we go to Al-Khalil, whose old city is ravaged and severed by the occupation with a nakedness that is dystopian. Our tour there is run by the Hebron Rehabilitation Committee, which has restored shops and buildings in the old city, beautifying them and bringing back to life. We’ll go from Al-Khalil all the way up north to Haifa, where our partners are the Arab Cultural Association, who are active in the vibrant Palestinian cultural scene there. We then go to Nablus, where for years we’ve worked with Project Hope — an NGO that started during the siege on Nablus in 2003, running classes for kids unable to get to school. Our event there will be in the garden of the municipal library. Then back to Ramallah for our closing event at the Khalil Sakakini Cultural Center.

LA: In the press release you mention some connected events in Gaza as a response to the siege, which prohibits PalFest from traveling there. Can you give examples?

YR: We’re screening On the Bride’s Side, a film about a group of Palestinians and Italians living in Italy who help a group of Syrians fleeing the war by faking a wedding with hundreds of guests, as a cover for traveling through Europe. There will also be poetry readings, including one via Skype by Gazan poet Khaled Jumaa, who lives in the West Bank. And there will be some workshops.

We haven’t been able to bring any writers in to Gaza since 2013. The closure of Rafah [the border crossing to Egypt], more or less constantly for the last three years, is a brutality that I don’t think I need to elaborate on. Gaza has been cut off from the rest of Palestine to the level of family — our Gazan friends who work or study in Ramallah, for example, find it extremely difficult to go home for visits. And Egypt, which is known to be close to Gaza in dialect, in cuisine and so on, has locked its doors and turned its back.

So for as long as we can’t bring people in, our partners in Gaza will arrange events that run parallel to the festival in the rest of Palestine.

LA: Can you tell us about the choice of participants? They span a wide range of the writing form, from journalism to fiction, and of age and fame, among other things. Is there something about their bodies of work that relates to Palestine or should we not think in so much of a directed way?

YR: There isn’t a set formula for our choice of participants. PalFest aims first to have people who are good at what they do — whose work we like — whether it’s writing or editing or running a bookshop. We try also to have a mix of ages and ethnicities and PalFest regularly promotes new Palestinian voices from the diaspora. We invite authors who are of interest to audiences in Palestine and whom we feel would come here with open hearts and take the experience on board. We invite authors who have audiences and play a part in shaping the cultural landscapes they work in.

LA: How is PalFest about literature and bringing world literature to Palestine while also being an act of resistance against the prevention of most Palestinians from free movement? Rather than thinking in binaries, how does the politics permeate this cultural act and convention while keeping its integrity and richness?

YR: The essential fact is that one can’t separate literature — and bringing world literature to Palestine — from resisting the occupation and its restrictions on Palestinians’ freedom of movement. You cannot bring books, writers, artists, films or musicians into Palestine without confronting the checkpoints, tariffs, arbitrary closures and blockades that the occupation has woven into every aspect of daily life here. What food people can grow, sell and buy, where they can grow it and where they can buy it, who they can visit, where they can go to school, where they can go on vacation, where they can work — these are all bound up in same web of oppression and restriction that means that in order to reach our audiences we have to go to them. We try to bring the international writers onto the stage in cities where we feel their particular audience is present, or can be. And we try to bring Palestinian writers onto the stage in cities they might not normally feel able to visit — even if their Israeli-issued permits officially allow them to.

So simply speaking, while of course we choose to be allies in resisting the occupation, the truth is that there’s no choice. You can’t run an international festival in Palestine and hope to reach a significant audience or show visitors any part of this incredible place any other way.

LA: Are Arab writers consciously invited to help activate a traffic of Arab writers to Palestine, and to revisit the politics of Arab solidarity with Palestine? And do you get push-backs on the basis of the boycott?

YR: The cultural isolation of Palestine from the rest of the Arab world is acute and obvious. A lucky few Palestinians are able to travel to Amman, less to Beirut or Cairo. Few Arabs come here — because they are not able to, or because they’re frightened of the push-back you referred to. In the West Bank, people are stunned to hear Egyptian Arabic.

Meanwhile, what was a twice-a-week flight between Cairo and Tel Aviv has now become daily. Businessmen come and go, deals are struck, and the progress of coordinated repression that began when Arab regimes started normalizing with Israel has continued unimpeded. It is the regimes that are doing the normalizing. They are benefitting from the exclusion of the citizenry and they’re making sure people have very little awareness of what’s actually going on.

But of course we are acutely sensitive to this issue. The festival is able to bring Arab writers who have foreign passports. It’s worth noting that these have included Palestinians living abroad who visit Palestine for the first time ever with PalFest. We’re signatories to the Boycott, Divestment and Sanctions Campaign and we don’t interact or coordinate with the Israeli government in any way other than presenting our passports at the border. Arab authors go on stage in Ramallah and in Nablus, they visit Al-Khalil and shops in its irrepressible old city (did you know that this is where the name of Cairo’s Khan al-Khalili comes from?). We all visit Al-Aqsa, a place which has become so unreachable for most Arabs that I think it has an emotional resonance even to the most secular visitor.

To me, this is where solidarity can begin: by knowing, by seeing. Carefully, of course.

AD
You Might Have Missed
Carbon Colonies & A Green New Deal
Where do old lesbians go to die?
Mugamma revisited: Reimagining the building and the square
What we talk about when we talk about trees
AD
Lina Attalah
67 articles on Mada

Topics
Related
Palestine Festival of Literature
Palestine in Turin, Paris and in Palestine
Lina Attalah | On May 14, in a cabin called Babel at Turin Book Fair’s Pavilion 3, Egyptian author Ahdaf Soueif and
literary gems
Literary gems: Shubra
Sherif Abdel Samad | Having grown up in Shubra myself, I was immediately sucked into Naim Sabry’s novel and finished its
BDS
Crossing lines with PalFest
Ursula Lindsey | Ursula Lindsey's thoughtful piece on freedom of movement in Palestine and the importance of the annual