11 sentenced to 3-12 years in prison for homosexuality 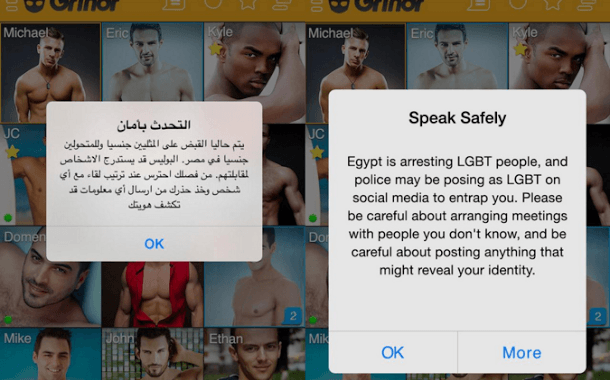 Courtesy: The Independent
By
Pesha Magid

The defendants were arrested from an apartment in Giza’s Agouza neighborhood in September 2015. Following the court’s ruling, six of them will spend nine years or more in prison. The court sentenced three of those accused to 12 years, while another three were sentenced to 9 years. One defendant received a six-year term and the remaining four have been sentenced to three years.

Head of the gender program at the Egyptian Initiative for Personal Rights Dalia Abdel Hameed said the case was indicative of the state’s practices in its ongoing crackdown on LGBT individuals.

Abdel Hameed says that moral police targeted one of the accused using a dating application, reportedly entrapping the individual by posing as someone interested in a relationship. Through the application’s messaging feature, they acquired the accused’s address and then were granted permission by the public prosecutor to raid the apartment.

When the moral police conducted the raid, they found eight men present at the residence, all of whom would eventually be included in the case, according to Abdel Hameed. They then acquired the address of another apartment where they arrested three other men who would also be accused in the case.

An officer from the morality police who wished to remain anonymous confirmed to Mada Masr that morality police officers heavily monitor LGBT people using the community’s dating websites and internet forums. He stated that it is common practice for a police officer to engage with someone online, agree to meet him or her in person, and then send the messages to the public prosecution to issue a warrant of arrest.

This pattern has been recognized by some dating applications. Grindr, a dating app commonly used by gay men, released a warning in 2014 saying that Egyptian police may be using the application to entrap individuals and warned users to take steps to protect their identities. Solidarity with Egypt LGBT estimates that between 2013 and 2015, 53 percent of charges leveled against LGBT individuals featured the use of websites and social media to entrap people.

The case against the 11 individuals included a long list of accusations related to debauchery. While homosexuality is not technically criminalized under the Egyptian penal code, LGBT individuals are often targeted through debauchery laws. Debauchery carries a maximum sentence of three years. However, Abdel Hameed says that, in cases against LGBT individuals, it is common for the prosecution to list several accusations related to debauchery to increase the prison sentence.

“This is revealing of the viciousness of the crackdown. Many of these accusations [in this case] could be restatements of the same thing. For example, people who were renting the place were accused of managing a place for debauchery. Then, there was another accusation of facilitating debauchery which is the same thing. But it is another accusation with another penalty, which means another year in prison,” she explains.

Abdel Hameed states that Judge Mohamed al-Husseiny who presided over the case is known for his homophobia. In a similar debauchery case, one of EIPR’s lawyers heard Husseiny say that the crime “shakes the throne of God.”

The Solidarity with Egypt LGBT campaign estimates that 172 LGBT individuals were arrested between October 2013 and December 2015, a figure the group reports is based on media reports. In their statement on Facebook condemning the recent verdict, the campaign stated they document a new case against LGBT individuals every two weeks.

“It is a clear conclusion that this crackdown and the amount of cases has nothing to do with law, nor justice. It is all political and judicial whim which aims to oppress one’s sexual freedom and deny people autonomy over their own bodies,” read the statement.

The French government also condemned the court’s sentence in a press release, stating, “We noted with concern the decision by the Agouza court to sentence 11 people to prison for their sexual orientation…France reaffirms its commitment to the fight against the violations of human rights based on gender identity and sexual orientation. France urges Egyptian authorities to uphold their international commitments in regards to the respect for human rights, including non-discrimination.”

Abdel Hameed called the recent verdict, “the tip of the iceberg.” “There are so many cases like this. They all happen in the same way,” says Abdel Hameed.

AD
You Might Have Missed
Where do old lesbians go to die?
Mugamma revisited: Reimagining the building and the square
What we talk about when we talk about trees
Carbon Colonies & A Green New Deal
AD
Pesha Magid
65 articles on Mada