The temporary outage of internet-based calling services like WhatsApp and Viber caused a social media storm in October 2015, but the episode left more questions than it answered: Are internet-based calling services illegal in Egypt? Was the block imposed by the National Telecom Regulatory Authority (NTRA)? And where do telecom companies and consumer rights fit into the equation?

A lawsuit that has now been postponed twice is hoping to force some answers from Egypt’s telecom regulators. The suit, which was postponed earlier this month and again on Wednesday, was filed against the NTRA by the NGOs Support Center for Information Technology and the Association for Freedom of Thought and Expression.

The lawsuit aims to force the NTRA to release a list of the services or websites that have been blocked in Egypt in recent month and to divulge the criteria upon which they were blocked, explains Aziza al-Taweel, the  Support Center’s lawyer. The next date has been set for June 12, at which point the NTRA has been ordered to present a technical brief outlining its position on the case and the technical issues surrounding it, according to Taweel.

So far, Taweel says, the NTRA denies blocking WhatsApp and other voice calling services, but also maintains that such apps provide unlicensed international calls and are therefore illegal. “They are claiming that they need to be licensed first, while denying any blockage at the same time,” Taweel explains.

NTRA spokesperson Karim Soliman confirmed to Mada Masr that the regulatory body considers these services to be illegal, but added no further comments.

Did the NTRA block VoIP?

Questions about the NTRA’s stance on internet calls came to public attention in October 2015, when social media went into a rage after many users reported being unable to use internet calling apps like Viber, Skype, WhatsApp on 3G networks and ADSL. Disgruntled users’ reaction worsened after a few scattered statements by customer service operators of telecom companies on social media confirmed that the services had been blocked.

Shortly after, the services went back to working, with the usual poor quality on 3G networks. Both the telecom companies and the government regulator assured the public there was no blocking whatsoever.

Exactly what happened was, and remains, unclear. After nearly six months, there has been little clarification about the incident, highlighting the lack of transparency among the agencies responsible for enabling and regulating telecommunications in Egypt.

When Mada Masr investigated the issue in November 2015, Egypt’s Ministry of Communications and Information Technology deflected any questions about the government’s plans for internet voice calls. Mariam Fayez, deputy director of the media relations department at the ministry, said such matters are in the hands of the National Telecom Regulatory Authority. Fayez declined to answer direct questions about whether the government is considering blocking VoIP services. The ministry is only concerned with strategic work, she said.

Meanwhile, the NTRA’s official media office refused repeated requests for information. Ali Anis, the NTRA’s Societal Interaction Director, told Mada Masr the authority has not blocked any services so far, and is not planning to do so.

All three of Egypt’s mobile phone companies — Mobinil, Etisalat and Vodafone — also insisted they took no action to block VoIP applications, apart from Skype, which has been blocked on 3G networks since 2010. Any problems with other applications were due to individual mobile phones or the applications themselves, company representatives said.

Telecom Egypt, the country’s landline monopoly and a major internet service provider, also insisted it is not blocking any applications, but refused to answer any further questions.

One could almost believe reports of service outages were a series of strange coincidences magnified by social media, or perhaps a technical glitch that affected users on different mobile networks, using different applications on different devices. And yet, a few accounts dispute the official narrative.

Before and during the outage in October, customer service representatives on Twitter clearly stated that the NTRA gave orders to block VoIP services. 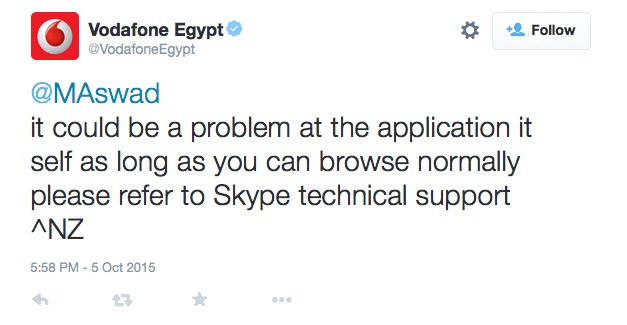 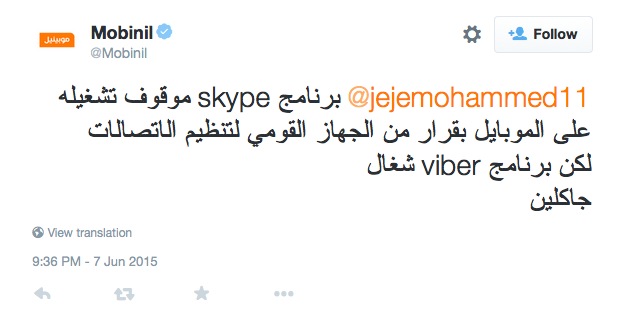 Some users even received pop-up messages alerting them to the fact that WhatsApp was blocked by their service provider: 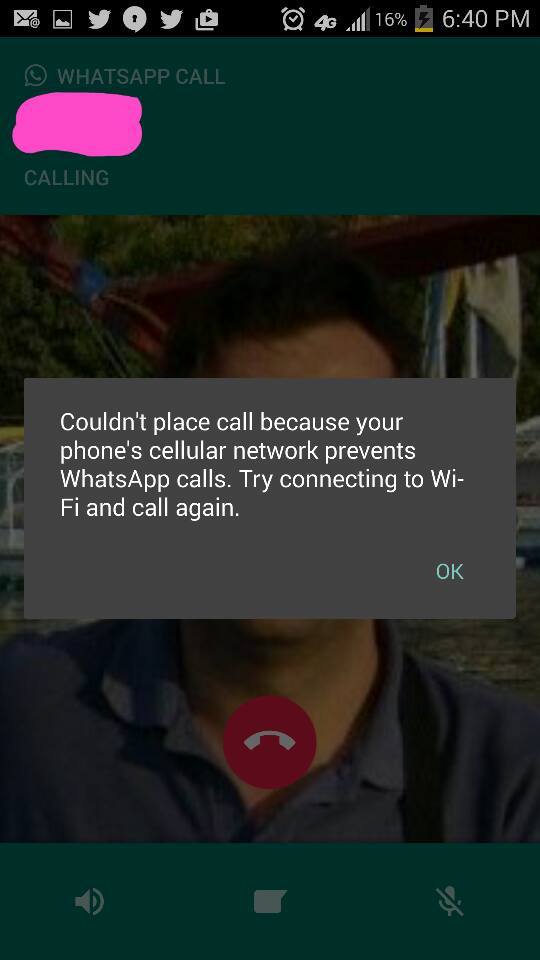 One NTRA representative also reportedly told a journalist for news site DotMsr.com that the agency had blocked VoIP — reports the NTRA later denied. This call, however, has been used in court by Taweel and the defense team as a proof.

An industry insider, who would only speak on condition of anonymity, also told Mada Masr the telecom companies did indeed block VoIP services, and on direct orders of the government.

Who does the NTRA work for?

Whether or not the NTRA is actually behind the block on VoIP applications, the episode raises questions about whose interests the regulator serves.

By law, the NTRA’s mandate is to protect users and their rights, a responsibility the agency is given in Article 2 of Egypt’s 2003 telecommunication regulation law. However, Article 4 of the telecommunications law requires the NTRA to protect “National Security and the state’s top interests.” Attempts to regulate the use of VoIP apps shows what happens when user rights and national security come into conflict.

“It is arguable that the NTRA is enforcing the ban on unlicensed trafficking of international calls, which is a crime according to Article 72 of the Telecom Act. However, it is also arguable that in enforcing this ban, the NTRA is also preventing users from making VoIP calls to other users in Egypt, even if those calls are routed internationally via the internet,” says independent researcher Amr Gharbeia.

One of the arguments against VoIP services is that, without cooperation from app developers, Egyptian authorities are unable to trace or monitor calls made over apps — unlike international or local phone calls made on landlines and mobile phone networks. This, opponents of the technology say, is a major security issue. “Legally speaking, if a crime occurred and you wanted to check call records of a suspect for example, they won’t agree. A famous example happened in Italy, where they tried to get records from the VoIP operators but they refused to even negotiate,” says Khaled Hegazy, external affairs and legal director at Vodafone Egypt.

Amr Gharbeia, an independent researcher, believes the telecom companies’ opposition to VoIP stems more from financial motivations than security concerns. Every free or low-cost call through VoIP apps takes money out of the phone companies’ pockets. This is especially true for lucrative international calls, all of which have to run through Telecom Egypt’s infrastructure, keeping rates high. “The reason for banning VoIP is all economic and is hardly a privacy or security issue. The telecoms want to keep the users paying higher fees for services they can get for much better prices or for free, so they are trying to monopolize the international calls market,” Gharbeia explains.

Vodafone, for example, has clearly expressed its desire to block VoIP, in particular WhatsApp’s voice calling feature. In March 2015, after WhatsApp’s voice calling service was launched, Vodafone Egypt sent a letter to NTRA asking about the legality of blocking the service “for the negative impact it has on the telecom sector.” However, according to Hegazy, NTRA never replied.

Hegazy, says that the telecom sector in Egypt, and in particular Telecom Egypt, has been hurt by these applications, although he was not willing to quantify how companies are affected.

“Telecom Egypt is the main international gateway for Egypt, so any international call must go through it. I think they are the most negatively affected in terms of revenues,” he says. “We earn almost the same amount from international calls as we do in local ones, so we are not really affected,” he adds, speaking of his own company.

Anis of the NTRA also dismisses the idea that VoIP apps are doing serious damage. “The financial impact of these applications in not big to begin with, and it affects the telecom companies, not the sector as a whole,” he says.

Ironically, phone companies don’t seem to have a problem with using VoIP services when it suits them. Expanding Egypt’s call center industry remains a hallmark of the country’s economic development strategy. Among the most prominent call center operators is Vodafone Egypt, which provides call center services for affiliates around the world, from the UK to New Zealand. These businesses would not be sustainable if operators had to pay international calling rates to route calls through the landline network. “Call centers in Egypt do use VoIP services. However, it is not illegal, they have obtained a license since they started operating in the country, because otherwise, no one will come here and firms will open its call centers in other countries like India,” an industry source says.

This presents another bind for the NTRA, and perhaps explains some of their ambiguity about VoIP. Any economic or security interests that would be served by blocking VoIP have to be balanced against the potential fallout of speaking too strongly against the technology.

Digital security researcher Ramy Raouf says officially blocking VoIP would have particularly bad repercussions for the digital economy. “If you block Viber for example, you will also block a number of advertisers alongside it, which will severely affect traffic levels and investment,” he says. “In 2011, when the internet was blocked during the revolution, the economy lost a lot of money as a result.”

Uncertainty about the official reaction toward these applications is not reassuring for any investor trying to enter the market, since it gives a bad idea about the Egyptian market as a whole, says Mahmoud al-Banhawy, a digital freedoms officer at the Support for Information Technology Center.

Hegazy disagrees. “Blocking these service in Saudi Arabia and UAE did not scare potential investors, nor will it do so here,” he argues.

With such mixed messaging about VoIP, the role and real intentions of the sector’s regulator remain a mystery. The Communications Ministry deflected questions, as did the NTRA’s media office. Anis, the agency’s social interaction director, simply says the NTRA is currently studying the situation as a whole, in attempt to reach a compromise among competing interests. “We are only trying to set some determinants,” he says. Customers, meanwhile, are left wondering where their rights fall into the equation, and waiting to see if VoIP apps are blocked overnight — a situation Wednesday’s lawsuit hopes to change.

AD
You Might Have Missed
Carbon Colonies & A Green New Deal
Mugamma revisited: Reimagining the building and the square
What we talk about when we talk about trees
Where do old lesbians go to die?
AD
Shahd Essam
8 articles on Mada

Topics
Related
National Telecom Regulatory Authority
How will Egypt’s govt react to the new WhatsApp encryption system?
The Facebook-owned company WhatsApp announced on Tuesday that it is providing its one billion users with
communications disruptions
Confusion reigns over the status of Internet calling apps
A hashtag calling on Egyptians to “Save the Internet” (#انقذوا_الانترنت‬‏) started
advertising
Overview of Egypt’s telecom sector: Between fierce competition and angry customers
Amira Salah-Ahmed | The brutally competitive worlds of advertising and Egypt’s telecom sector have collided — in Ramadan,