اقرأها بالعربية
What’s behind this month’s spike in utility bills? 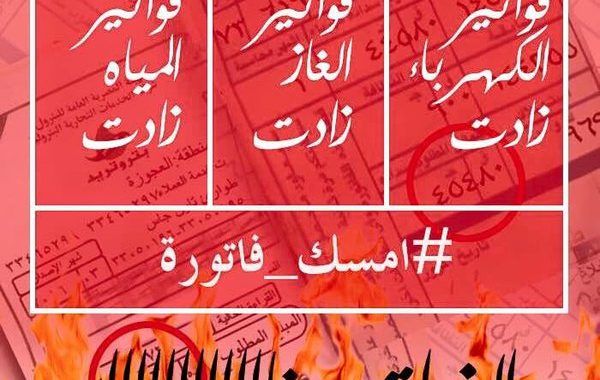 Mimicking a colloquial Egyptian phrase, “emsek harami” (catch a thief), online campaign Emsek Fatoura (catch a bill) has been used to protest what many say is an exponential increase in their utility bills over the last couple of months.

Egyptians involved in the campaign have been saying they are either unable to pay their bills or are unwilling to do so until the relevant authorities explain the reasons for the increases.

Using the Emsek Fatoura hashtag, one user tweeted that in March she didn’t receive her water bill and this month owes LE107. 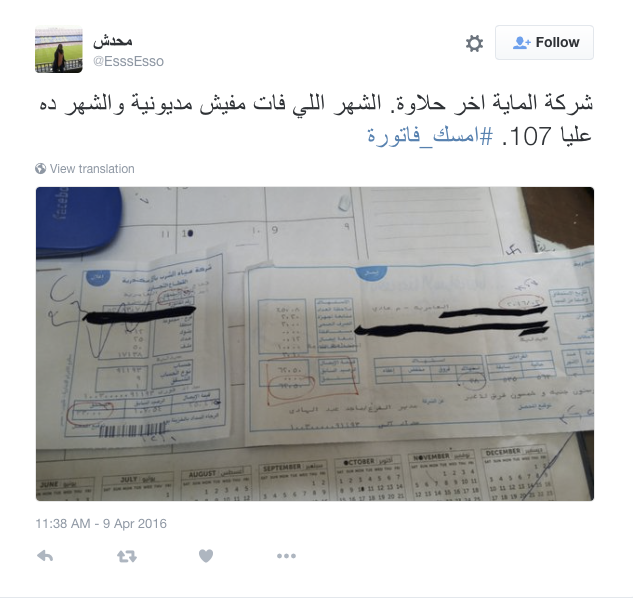 “Why do I have such a big electricity bill this month? Do they think I’ve opened up a police station where I torture people by electrocution all day and night?” another user complained.

A disgruntled youth tweeted, “I received an electricity bill amounting to LE120 this month. How is this possible when I live alone, am using energy-efficient light bulbs, and also haven’t started using my air conditioner yet?”

Emsek Fatoura has been gaining traction, with support from pro-government media figures, such as talk show host Gaber al-Karmouty, who appeared on his show Manchett (Headlines) on the privately owned ONtv channel wearing a vest made of utility bills and holding others in his hands. 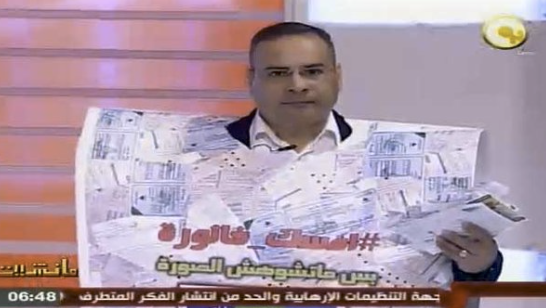 “I’m not instigating action against the state, nor am I trying to take advantage of the situation. But there is a problem in terms of the most recent electricity bills, Karmouty said. “We feel electrocuted from our electricity bills, muddied over our water bills and flaming over our gas bills,” he added.

Several other mainstream media outlets have dedicated extensive airtime to the issue of increasing utility bills, giving callers space to vent their grievances.

The campaign has also been championed by two members of parliament — Haitham al-Hariry, a left-leaning independent who has also adopted several critical stances on police violations and forced disappearances, and Khaled Mansour from the Egyptian Social Democratic Party.

They have called for a parliamentary session to be attended by the ministers of electricity, petroleum, state-owned gas billing companies and the Holding Company for Drinking Water.

Wael Habib, a worker at the state-owned Mahalla Spinning and Weaving Company, says that this month his water bill was LE62, whereas he is used to paying around LE5.

“I complained to both the collector and the water company,” he recounts, “and they told me there was an error with my meter in previous months so the difference was added to this month’s bill. They threatened to cut off our water supply if I didn’t pay,” he says, adding that several of his neighbors have refused to pay because they feel they are being overcharged.

In Tanta City, Gamal Othman, a factory worker who is currently between jobs has seen his electricity and water bills triple. “I’m barely able to pay any more,” he complains. “Due to a lack of liquidity, I couldn’t pay my utility bills for two months. I don’t know what I’m going to do if they keep increasing them. Several people I know have stopped paying their bills altogether, especially electricity and gas bills.”

The prices are unjustifiable, Othman maintains, “especially if there is no national increase in wages to match the increase in utility bills,” he adds.

For many people these increases have added to existing difficulties in meeting household expenses. A worker at the biscuit-manufacturing company Bisco Misr (largely owned by the US-based Kellogg Company) says he has been unable to pay his electricity bill for nearly four years.

Since July 2015, the cost of utilities provided by the state has gradually increased, with consumer bills peaking dramatically in April this year. As the state gradually moves towards decreasing subsidies for water, gas and electricity, there are growing fears that summertime bills will even be even higher, particularly for those using air conditioners.

Representatives from ministries and utilities companies claim they haven’t significantly raised their rates. They blame meter readers and collectors.

“Claims that the ministry has increased pricing over the past two months are entirely inaccurate,” Yamany says. The ministry doesn’t have the authority to raise prices, but is implementing the provisions of a 2014 prime ministerial decree.

Issued in July 2014 by former Prime Minister Ibrahim Mehleb, Decree 1257 stipulates that the cost of electricity bills will increase incrementally over a period of five years. These increases are to be introduced on July 1 each year, until 2018.

The decree specifies the pricing for different consumption brackets (from low capacity to extremely high capacity) and types of customers, ranging from personal households to shops and industry. It also mandates a decrease in the number of household consumption brackets (down from six to five, by the year 2019), meaning that those paying lower rates will be pushed up into higher paying rates.

The independent 10Tooba group, which focuses on issues of infrastructure and architecture, issued results of their recent study on electricity prices (published in Sada al-Balad). The study revealed that from 2015-16, the state has been providing energy benefits for profit-making industries, subsidizing around a third of their expenditure, while simultaneously decreasing subsidies to the general populace.

In an interview with the privately owned Al-Mal news portal, one of the Electricity Ministry’s collectors commented that due to ministerial officials’ faulty calculations, household consumption may be bumped up into an upper price bracket.

In televised interviews with passersby, many complain their electricity bills drastically increased in April — at least doubled, or increased up to five times — in comparison to their other bills this year, while their consumption has generally stayed the same.

“Our offices are open to the public and our rates are available on our websites and in the media. We welcome any complaints from the populace,” Yamany said during his televised interview with LTC channel.

Attempts to call the local branch of the electricity company to inquire why my own monthly bill for April (LE299) had increased by nearly 10 times (an increase of over 934 percent) the rate I had paid in March (LE 32) were unsuccessful. I couldn’t reach the operator, as the phone numbers the ministry listed on the back of the bill weren’t operational.

For natural gas bills the hotline number 1122 is functional for Petrotrade Company for Gas and Billing Services (Egypt’s largest provider of natural gas for domestic use). But the service costs 50 piasters a minute, and a caller may be left waiting for several minutes before reaching an operator.

If not price hikes, why so high?

The spokesperson for the Electricity Ministry explained that nearly 32 million residences are being serviced by just over 12,000 collectors, a strong indicator that they are overstretched and may be prone to errors.

Karim Reda, former employee at Petrotrade Company for Gas and Billing Services, says another reason for the fluctuations in gas bills is that the company’s collectors were on strike (over low wages and unmet contractual agreements) for a period of 45 days from December 2015 to February 2016.

During this time gas bills went uncollected and “some users had to pay three months worth of bills in April,” he explains.

“The company is overstretched and understaffed. Many collectors are unable to pass by each apartment every month. Therefore, they often issue approximate readings — based on the previous month’s consumption — without checking the meter,” Reda says.

Water bills are typically not issued on a monthly basis, with irregular bills for larger sums displeasing some customers.

An unnamed official from the holding company told the privately owned Al-Watan news portal that bills will be issued in the future on a more regular basis, to ensure no more than a 25 percent fluctuation from month to month.

There has been speculation that during the summer months, when demand for cooling and electricity increases, the ministry may resort to distributing the consumption rates of these months over the year, so consumers are not overwhelmed during peak season, especially in light of the new price increases scheduled for July.