By
Amena Sharaf and Isabel Bottoms

Egypt just hosted the sixth African Ministerial Conference on the Environment (AMCEN). The theme this year was: “Agenda 2030 and Paris Agreement: From policy to implementation in Africa,” with the aim of discussing how to implement the global Paris agreement on the reduction of climate change, Africa’s sustainable development goals and the African Renewable Energy Initiative.

Egypt’s Environment Minister and President of AMCEN, Khaled Fahmy, hosted the African ministerial meeting in Cairo. Fahmy recently called on Egyptian civil society to do more on climate change. But in order to do so, Egypt needs to focus on renewable energy, both for its own sustainability and in order to alleviate poverty and tackle inequalities.

The violence of climate change has not fully sunk in globally and is still generally viewed as a far-away threat. Yet, data collection from the first quarter of 2016 has shown this is far from the case. The scary reality is that climate change is already upon us. Our best efforts, therefore, are necessarily confined to reducing its worst impacts, not preventing it altogether. Particularly vulnerable regions and countries are those where the weather is very cold, very hot, very dry, or very close to sea level. All things considered, Egypt will likely be hit hard.

Egypt will, and in some cases already is, suffering from extreme water stress, natural disasters and extreme weather events, as well as saltwater intrusion into the freshwater resources of the Nile Delta, rising sea levels affecting coastal areas, a rising water table wiping out agricultural practices, loss of fishing due to changing species migration patterns, ocean acidification and rising surface water temperatures. In sum, this means the Egyptian government must ensure that the country can feed itself, generate energy, offer people economically sustainable livelihoods, and where possible, be resilient and adaptive as climate change increasingly impacts the country.

The sector with the greatest impact on the economy — whether through creating greenhouse gas emissions or offering developmental solutions — is the energy sector. Energy is a key component in the web of Egyptian life. This means that decisions on energy are far-reaching and directly impact all Egyptian citizens, whether positively or negatively. Egypt’s persistent power cuts remind us of this.

Many of those working in civil society organizations have observed the lack of a governmental vision for energy. In response, the Heinrich Böll Foundation’s (HBS) and the Egyptian Center for Economic and Social Rights (ECESR) launched “80 Gigawatts of Change: Egypt’s Future Electricity Pathways,” the first publicly accessible, civil society analyzed scenario for the Egyptian electrical sector.

It is a first attempt to work out how Egypt’s electricity sector could develop between 2015-2035 if issues such as climate change and its impact on communities and ecosystems, as well as water use and pollution, are taken into account. The report offers seven different energy pathways, each with their various implications, including costs, greenhouse gas emissions, job creation, impacts of pollution and the infrastructure required.

Egypt suffers from a high rate of youth unemployment, which officially reached 13 percent in 2014. Across the seven options explored in the 80 Gigawatts of Change plan, intense solar energy production offers twice as many jobs as the business as usual energy plan. It is estimated that the manufacturing and installation of renewable Photovoltaic (PV) solar energy would create between 26,000 and 41,000 jobs per annual gigawatt hour of energy produced by 2035 (if solar energy is included at 23 percent to 35 percent in the energy mix). Decentralizing energy production not only protects communities from increases in energy prices due to the volatile prices of fossil fuels, it also maximises job opportunities for local communities.

Turning agricultural and sewage waste into biomass energy, which depends on collections of local agricultural waste at the level of governorates, would also create local jobs. The biomass collection offers farmers an additional reliable income stream. This will also help put an end to the “black cloud” of smoke from rice straw burning, which will occur in a controlled manner and not in the open. As the prevailing trend across Europe shows, renewables and energy efficiency can create at least twice as many jobs as fossil fuel power generation.

Water pollution is an issue at the crux of Egypt’s sustainable development. Poor water treatment and enforcement of existing regulations is already causing health issues for the most vulnerable in the country, who rely on the overburdened national health service.

Using coal for energy poses a huge potential water pollution risk, the 80 Gigawatts of Change plan found. Coal regulations require coal-fired power stations to use pollution abatement technology. These technologies create two by-products: gas fixing effluent and fly ash. But the “scrubbers” that remove the noxious gases from the emissions transfer the polluting molecules into the water. This polluted water then needs to be treated, but with the track record of enforcing water pollution regulations in Egypt, it seems unlikely that there will be the consistent application of such measures, potentially contributing a major new source of heavy or industrial water pollution to Egypt’s watercourse.

The second byproduct of coal, fly ash, is particularly toxic. It has decimated local communities in the United States, where coal-fired power stations have stored it carelessly, and the toxic elements have seeped into the surrounding land and water sources. This can cause huge harm to local populations, not just humans, but also animals, birds, plants and trees.

Another source of water pollution comes from the introduction of agricultural waste and human sewage leaching untreated into the Nile and its tributaries. Instead, power plants creating energy from biomass, which includes agricultural and sewage waste (not solid waste) should be established. The use of untreated sewage through building biomass power plants attached to existing sewage plants will relieve the overburdened sewage treatment system, allowing them to perform their function much better. The vision for this energy source aims to create new income sources locally, as well as ending sewage pollution of the Nile.

In many areas of Egypt, sewage pours directly into ditches or waterways untreated due to a lack of infrastructure. Instead, communities can utilize this waste as biomass energy and will have an economic reason for the collection and use of their sewage, thus dealing with one of three main sources of water pollution.

Water shortages are already a reality in Egypt and the United Nations has estimated that by 2025, Egypt will be in a state of absolute water crisis. An equitable pathway for generating energy in Egypt cannot therefore rely on large amounts of water being accessible over the next 50 years, or even in five years time.

The water consumption of various technologies falls into three categories: untenably high consumption, medium consumption that is being carefully managed or transitioned away from, and low consumption. Coal and nuclear energy sources fall under the first category of high usage, as well as those with a heavy reliance on gas power stations. Natural gas and concentrated solar power (CSP) are seen as using a medium amount of water. Biomass has a high water footprint initially, but the waste generated is currently not disposed of safely. The technologies with the most minimal water consumption are wind and solar PV, posing many opportunities for diversifying Egypt’s renewable energy sources. 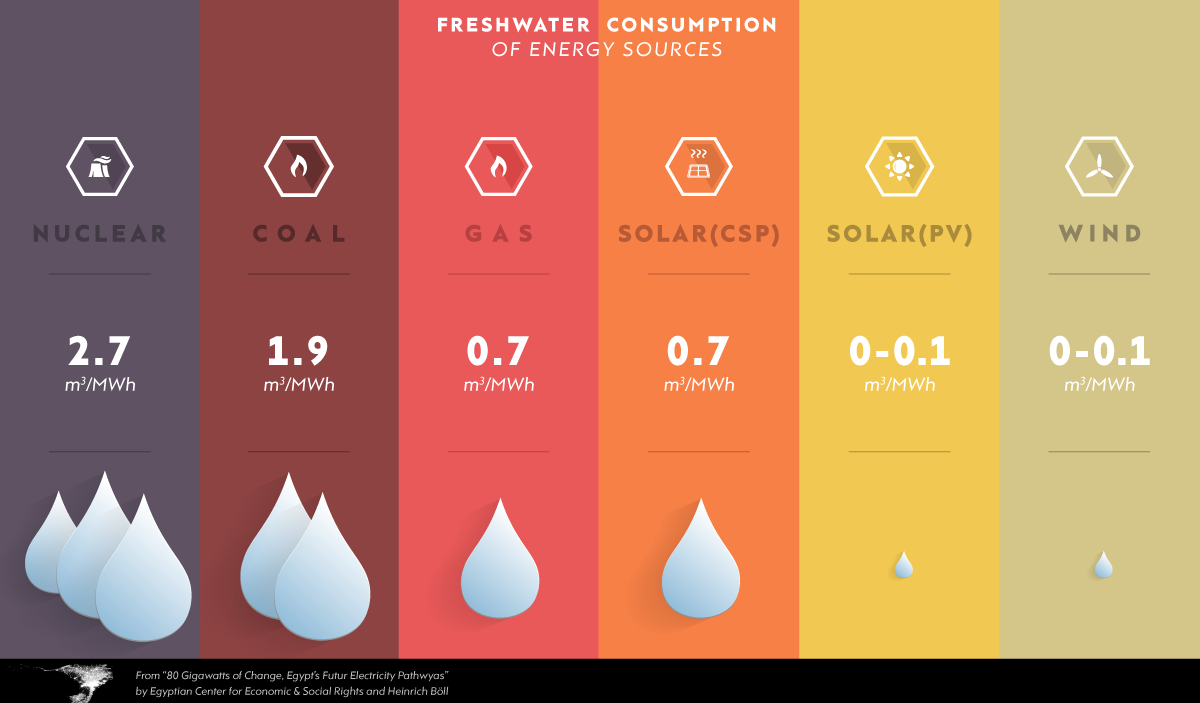 India’s experience in the field of bioenergy and community involvement is astounding. By 2010, 90 percent of rural energy needs and 40 percent of urban energy needs in India were met by biomass energy. The Indian government’s initial top-down approach of pushing the technology failed, but picked up when it started to engage grassroots organizations, NGOs and local government agencies in making policy decisions.

Energy decentralization empowers sections of the community that are often marginalized, such as farmers in rural villages, by offering energy decision-making processes that are closer to their everyday realities, increasing the likelihood of the fair allocation of resources, as well as reliable energy flows.

The centralized state of the current energy distribution mechanism in Egypt — specifically the national grid — supports favoritism of certain categories of consumers, making it even harder for the poor and marginalized in society. It also isolates end consumers from the process of energy production and distribution, which makes efforts to promote energy efficiency and responsible consumption through behavioral change much harder.

The “Towards Energy independence” and “Towards Decentralized Energy” suggestions in the 80 Gigawatts of Change plan include more stakeholders than in previous studies. For example, the “Business as Usual” plan only includes the national government and the private sector, while national policies and investors are crucial for the implementation of any energy plan. The experiences of many nations, including Egypt, have proven that the involvement of local community players and local government strengthens the implementation and benefits of initiatives.

Energy policy in Egypt is at a crossroads. The choices made will determine whether the country will suffer from “carbon lock-in”  — a situation created by large fossil fuel-based energy systems that inhibits public and private efforts to introduce alternative energy technologies — or whether it will cross over to renewable energy, creating dependable jobs, offering reliable local energy resources and preserving water resources in the face of climate change.

Finally, it is very clear that involving civil society on these issues will lead to greater innovation and people-friendly policies that may ease Egypt’s deeply rooted issues of poverty and marginalization.

Topics
Related
coal
Democratizing Egypt’s energy roadmap
Isabel Esterman | Decisions about energy policy in Egypt are usually made behind closed doors, with little room at the
coal
Egypt to rely on coal for 25-30% of energy
In an ideal scenario, Egypt would rely on coal to meet 25 percent of its energy needs by 2030, an energy
2015 Egypt Economic Development Conference
After a law liberalizing the electricity sector, Egypt scores major investments at summit
Isabel Esterman | This weekend in Sharm el-Sheikh, electricity sector deals dominated at the Egypt Economic Development
cabinet
Cabinet approves draft law aimed at opening electricity sector
Egypt’s Cabinet on Wednesday approved a draft law that will pave the way for privatization of the country’s