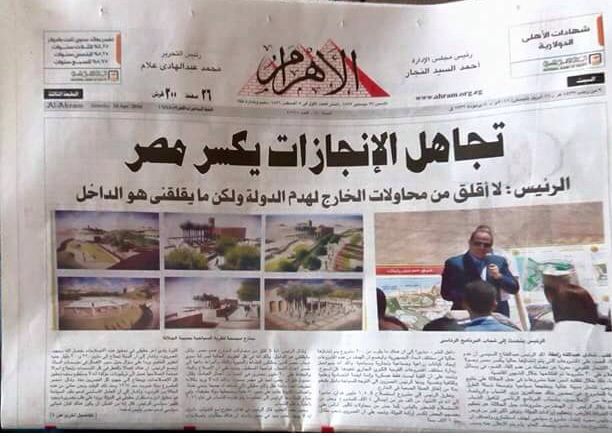 Several major local newspapers, including the state-owned Al-Ahram, which has the highest circulation of Egyptian papers, opted to largely ignore the protests that took place nationwide on Friday denouncing Egypt’s decision to hand sovereignty of the Red Sea islands of Sanafir and Tiran to Saudi Arabia earlier this month.

Thousands turned out to demonstrate on Friday in what were the largest protests in two years, challenging a severe crackdown on street movement since the controversial anti-protest law was issued in November 2013.

Al-Ahram only acknowledged the protests in a short story on its inside page, with the headline, “Security forces abort plans to instigate riots.”

Police clashed with protesters in several locations across the country on Friday, arresting over 100 people, most of who were released later in the day.

Al-Ahram also highlighted a smaller, pro-government protest on the same day in a short article titled, “A protest to support the return of the islands to Saudi Arabia under the slogan ‘we trust the state’.”

Similarly, the state-owned Akhbar al-Youm only published a small news story on the protests, focusing on the reaction of security forces titled, “Security disperses protests against the island agreement.”

According to the privately owned Al-Watan newspaper, the “Islands protests failed and security tightened its grip on the street.” The paper described the protests as “limited” on its front page on Saturday.

This is not the first time Egyptian newspapers have ignored anti-government protests. On 26 January 2011, following unprecedented demonstrations across the country that resulted in the removal of 30-year President Hosni Mubarak, Al-Ahram’s main headline read, “Widespread protests and instability in Lebanon,” with a smaller headline on Egypt’s protests. The state-owned Al-Gomhoreya led with, “Protesters obstruct traffic and riot in Tahrir Square.”