اقرأها بالعربية
Behind the Panama Papers: The full story of the Mubarak sons’ tax-sheltered company 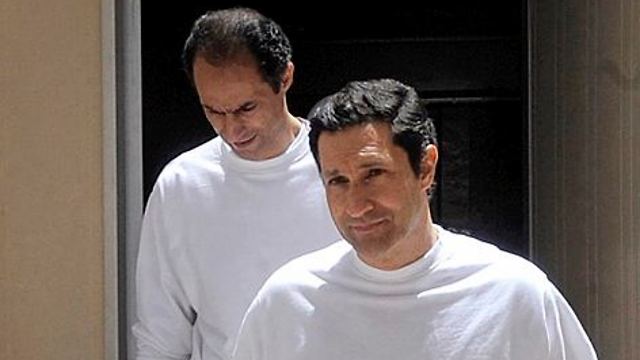 The Panama Papers leaks published by the International Consortium of Investigative Journalists (ICIJ) on Sunday included information on Pan World Investments, a company owned by Alaa Mubarak — son of former President Hosni Mubarak — that was registered in the British Virgin Islands in order to evade taxes and preserve the secrecy of the owners’ identities and financial transactions.

An investigative report Mada Masr published in 2014 titled “Tax tourism on the beaches of the Caribbean” detailed Pan World’s ties to the Mubaraks and businessmen in their close circle, based on documents Mada Masr acquired from the Justice Ministry’s Illicit Gains Authority.

So far, Alaa Mubarak is the only Egyptian that has emerged out of the Panama Papers’ long list of global political figures, presidents, governments, celebrities and criminals, which was released in the biggest leak of its kind in the history of journalism. The papers consist of 11.5 million documents leaked from a Panama-based law firm, Mossack Fonseca, which specializes in registering and selling companies in countries with low or no taxes for customers all over the world. The leaks show how the company helped its customers commit tax evasion and money laundering crimes.

The German newspaper Sueddeutsche Zeitung acquired the papers and shared them through the ICIJ with a team of 370 journalists from more than 70 countries, including the independent Egyptian journalist Hesham Allam.

According to a report by the Egyptian Initiative for Personal Rights (EIPR) issued last year, the Egyptian treasury loses as much as LE5 billion in tax revenues each year because it allows Egyptian companies to use tax havens, meaning that rich Egyptians transfer their capital and profits that they make in Egypt offshore, then reinvest them in Egypt in the form of foreign investment of unknown origins.

According to the leaks published yesterday, authorities from the British Virgin Islands decided to freeze Pan World’s activities and fined Mossack Fonseca US$37,500 for failing to properly check Alaa Mubarak’s assets, as the authorities called him a “high-risk client.”

However, the information revealed by Osama Diab, an anti-corruption officer at EIPR, and Nicholas Hildyard of the British Cornerhouse group, which focuses on social justice, uncovered more details about the way money and politics were handled in the last 15 years of Mubarak’s rule.

Pan World Investments was established in 1996 and registered in the British Virgin Islands, known as a safe haven for major political figures and businessmen looking to hide their money, either due to the sensitivity of their positions or to evade taxes.

A leaked letter from Mossack Fonseca to British Virgin Islands investigators had listed only Alaa Mubarak as the beneficial owner, giving his London address. But according to the Illicit Gains Authority’s information on the Mubaraks’ fortune, Gamal and Alaa jointly owned the company in a 50-50 split, which means that the company is not owned by Alaa alone.

But how did Alaa and Gamal hide their huge investments in Egyptian companies? By investing in a company that, in turn, invests in other companies, and so on until a cycle is created where it’s difficult to identify the original source of the money.

Between 1996 and 2008, Pan World Investment owned a 50 percent stake in the Bullion Company, which was registered in Cyprus. Bullion owned a 35 percent stake in another investment company registered in the British Virgin Islands called EFG Hermes Private Equity, which owned two funds under the name EFG Capital Partners. Those funds invested remotely in several Egyptian companies, including Suez Cement, the National Bank of Egypt, Talaat Mostafa Holding and Alexandria for Mineral Oils.

EFG Hermes Equity also owned a third fund under the name of Horus Food and Agribusiness, which in turn invested in Edita Food Industries, Alwadi Holding, Misr October for Food Industries (El-Misreieen) and other companies. All these companies accepted investments from funds that were tied to other funds, which in turn were tied to companies that all led back to Pan World. Gamal and Alaa Mubarak then collected the profits and transferred them to their offshore accounts.

In 1997, Pan World became a partner in another company called Egypt Fund Ltd, registered in another tax haven in the Caribbean’s Cayman Islands. Egypt Fund Ltd managed another fund called Horus, with a capital of US$54 million, and that fund invested in 18 private sector Egyptian companies. 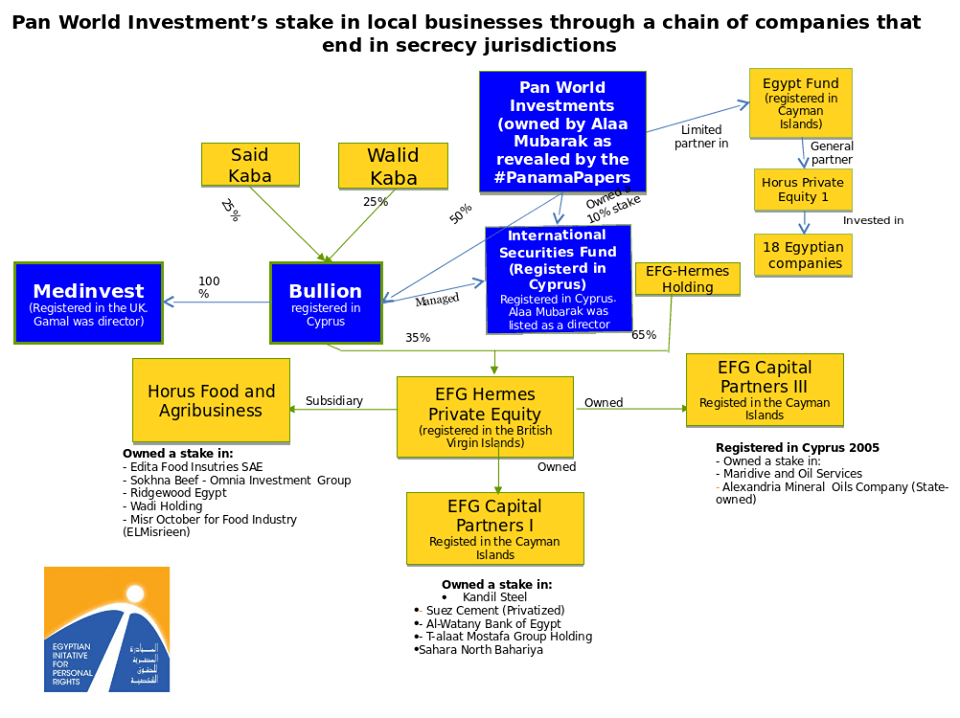 In February 2008, Pan World Investment sold its stake in the Bullion Company in Cyprus and transferred its stocks to another company, also registered in Cyprus, called Nakoda Limited. Nakoda was owned by another Cyprus-registered company called CP Palema.

The owners of Nakoda and CP Palema have not yet been revealed, but many signs suggest that these companies are also owned by the Mubarak sons: In March 2013, EFG Hermes in Cairo asserted that Gamal Mubarak still owns a share in EFG Hermes Private Equity through Bullion, and that he made US$880.000 in profits annually through his investment in Bullion. The second clue pointing to a Mubarak ownership is that CP Palema, the owner of Nakoda — which in turn owns Bullion — is actually nothing but a nominee services company acting as a front, meaning that it doesn’t actually exist, and its whole role is to own other companies on behalf of people who don’t want their names on the company papers.

In April 2013, EIPR and the British Cornerhouse addressed the European Commission to inform it of the findings of their research, which revealed all these Cyprus-based companies, and demanded the commission to include them in the European Union’s decision to freeze the assets of the Mubaraks and their close associates.

In March 2014, the European Commission wrote back saying that the European Union had decided to freeze four bank accounts belonging to Gamal Mubarak in Cyprus that were all tied to Bullion.

EIPR and Cornerhouse also contacted the British Virgin Islands authorities to inform them that several assets owned by the Mubaraks were held in their territory, including Pan World Investments. The two organizations demanded the freezing of all these assets, in accordance with the decision issued by the Virgin Islands authorities to freeze the assets of 19 Egyptians, including Hosni Mubarak, his family and his close associates (including, of course, Gamal and Alaa). The authorities responded by saying that they had started an investigation into the assets and would take the necessary measures when the investigations concluded.

The Panama Papers revealed what is likely the last stage in the life of Pan World, as it shows that the Virgin Islands authorities investigated the company in 2014 and froze its assets, and penalized the Mossack Fonseca law firm for not properly checking the origins of Alaa Mubarak’s assets before registering his investments in the islands. Mossack Fonseca cut ties with the company in April 2015.

Osama Diab of EIPR tells Mada Masr, “Since 2012, we’ve known of the existence of Pan World and Alaa and Gamal Mubarak’s ownership of it, but the new leaks show for the first time that the Virgin Islands authorities have actually taken real measures to freeze the company, which is a pleasant surprise given the Virgin Islands’ reputation as a tax haven and a known cover for illegitimate money from all over the world.”

But Diab asserts that the picture is far from complete, as the information revealed about the investments of the Mubaraks and their associates only covers one haven — the British Virgin Islands. However, most of these investments passed through Cyprus, which maintains a degree of transparency as a member of the European Union.

Diab adds that EIPR has on several occasions asked the Egyptian government to take serious action to limit the transferring of capital and profits made in Egypt to countries with low or no taxes, which helps big companies to evade the taxes due in the country, affecting the state’s ability to provide basic services to Egyptians.

Diab argues that “the government should also revise the statistics related to foreign investment in Egypt to differentiate between real investments coming from foreign sources, and investments that are in reality Egyptian money being reinvested in Egypt in the form of foreign money after going through tax havens abroad.”

AD
You Might Have Missed
Where do old lesbians go to die?
Mugamma revisited: Reimagining the building and the square
Carbon Colonies & A Green New Deal
What we talk about when we talk about trees
AD
Hossam Bahgat
19 articles on Mada

Topics
Related
Alaa Mubarak
Alaa Mubarak among political figures exposed in Panama Papers leak
Alaa Mubarak, the son of former President Hosni Mubarak, is among the global political figures whose
Egypt-Switzerland relations
Five years on, efforts to recover Mubarak’s money are going nowhere
Heba Afify | “Well, let me put it this way … We have to see what we can do … I can’t tell
economy
From EU money to Egypt, via tax havens
George Turner | The honor of delivering the keynote address at the high-level EU-Africa Business Forum earlier this year
Alaa Mubarak
The Mubarak mansions
Hossam Bahgat | Hossam Bahgat investigates: How Egyptians unknowingly paid for the ruling family's lavish lifestyle