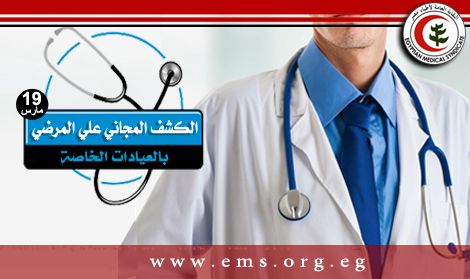 A number of doctors in private medical clinics provided free checkups on Saturday, joining the recent campaign for accessible healthcare in public hospitals.

This essentially means patients in public hospitals just have to pay the basic fee for entry, which ranges from LE1 to LE3, with treatment, x-rays and medication provided at no additional cost.

Doctors in private clinics announced they would voluntarily support this campaign, by offering one day of free checkups on March 19.

The one-day initiative in private clinics was carried out a day after Egypt’s National Doctors Day, following encouragement from the Doctors Syndicate to either close or provide free checkups for the day.

The syndicate recommended that participating doctors register their personal information and clinic name with their local branch syndicate, in order to coordinate and monitor volunteers and “thank those who participated in the campaign.”

The initiative was run on a voluntary basis in private clinics, syndicate secretary Ehab Taher told Mada Masr, explaining that doctors are fronting all expenses associated with providing a free service. “Service fees are their only source of income and livelihood, with which they have to pay their staff and operating expenses. This is why it is only a one-day campaign in private clinics, otherwise doctors would go broke,” he explained.

“The aim of this initiative is to show patients that doctors — whether in public hospitals or private clinics — are on their side,” Mehana explained, adding, “So far we’ve received very positive and sympathetic responses from patients.”

Doctors hope this campaign will put pressure on the state to expand its healthcare budget from the current level of 4 percent to something more in line with the expenditure of developed countries, which spend an average of 15 percent of the national budget on healthcare, Mehana asserted.

The syndicate is due to announce the number of doctors from private clinics who participated in Saturday’s campaign soon.

The Beheira branch syndicate said some of its doctors are also planning to provide free checkups later this week.

Last week, the state-owned Al-Ahram newspaper reported that the Interior Ministry also announced a campaign of its own to provide free healthcare to patients in its hospitals every Friday.