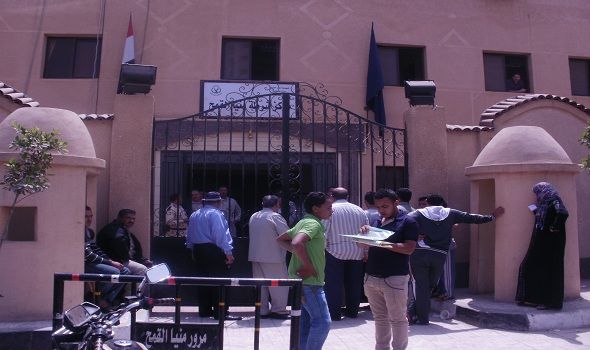 The woman’s brother, along with two other men, had been arrested on suspicion of being gay and the three were being detained at the station ahead of trial. It is not clear on what charges they are being held, but the majority of people are arrested because they are presumed to be LGBT face charges of debauchery or perversion.

The International Federation for Human Rights (FIDH) reported LGBT individuals are often targets of state-sponsored sexual violence in Egypt, especially in prisons, in May 2015. Katherine Booth, the director of the women’s rights office at FIDH, previously told Mada Masr that security forces subject them to sexual violence as a method of punishment, humiliation and control.

The response to an HIV disclosure on the part of police authorities offers insight into the violence faced by detainees who are LGBT — or who are presumed to be — as well as a state-sponsored moral panic around homosexuality and institutional ignorance about the nature of HIV.

The fact that authorities state they expect HIV to be transmitted through sexual encounters with LGBT individuals, she explains, points to both how vulnerable they are in prison and how little protection they are given by prison authorities.

Scott Long, a gender and sex rights activist and the author of the Paper Bird blog, says that authorities often encourage sexual violence of LGBT detainees.

“LGBT people, particularly ones who look different from the gender assigned at birth, face sexual violence throughout the prison system,” he says. “Guards and officials know about this, in some cases they encourage it, handing over prisoners for abuse or rape.

“At best, guards are indifferent to what happens inside cells, preferring to leave the regulation of those spaces to the prisoners’ own hierarchies,” he adds.

By way of example, Long says, guards deliberately encouraged the sexual abuse of detainees charged with debauchery and indecent public acts in the infamous Ramses bathhouse case when 26 men were arrested in a police raid by journalist Mona Iraqi who alleged on her Facebook page that the bathhouse was a den of “illegal gay sex workers.”

While being gay is not technically illegal under Penal Code, security services have conducted an ongoing campaign against LGBT people who are usually charged with debauchery and violating public morals.

The abuse by authorities comes feeds into and is part of a broader societal homophobia. After the defendants in the Ramses bathhouse case were acquitted they faced social stigmatization to such an extent that one of the defendants attempted to commit suicide.

Long describes solitary confinement as itself a form of violence, stating that protecting prisoners from sexual violence should not come at the cost of their personal rights, pointing to UN condemnation of its use as a way to “protect” prisoners.

It is clear, Abdel Hameed says, that the authorities are less concerned with any protection of the detainees than they are afraid of the spread of HIV, though the move to test everyone indicates deep institutional ignorance about the virus and its transmission.

The HIV virus has an incubation period making the tests “basically meaningless from a health standpoint,” Abdel Hameed says.

Long suggests that the case presents a “devastating picture” of the ignorance of the police authorities.

“When it comes to HIV,” he says, “they rely on magical thinking and mythology as in this case, rather than taking actual measures to prevent the violence. These tests are about as effective as giving them kofta, which the regime also thinks is a cure.”

Both Abdel Hameed and Long, longtime observers of gender and sexuality based violations, note that apart from the inefficacy of the tests, involuntary testing is also a human rights violation.

Not only is the authorities’ understanding of HIV not very scientific, but deeply entwined with homophobia, they say.

“There’s no evidence that this kind of fake ‘precaution’ happens when, say, an intravenous drug user is imprisoned,” Long says. “The authorities think of HIV as a product sex between men. They’re grossly ignorant of other modes of transmission, including heterosexual sex.”

The targeting of LGBT individuals has been described as an effort on the part of the state to assert its moral authority, with sexual minorities easy scapegoats for public moral panic.

Abdel Hameed says part of the problem with the Haram Police Station case is its association of being gay and HIV.

“That association is really dangerous,” she says, “It feeds the panic they want to create around homosexuality.”

AD
You Might Have Missed
Where do old lesbians go to die?
Mugamma revisited: Reimagining the building and the square
What we talk about when we talk about trees
Carbon Colonies & A Green New Deal
AD
Pesha Magid
65 articles on Mada

Topics
Related
Haram Police Station
Police station to test 170 inmates after report of HIV-positive detainee
One hundred and seventy people held at a Giza police station are to be tested for HIV/AIDS
FIDH
Q&A with Katherine Booth on the state’s use of sexual violence
Pesha Magid | The International Federation for Human Rights (FIDH) published a report Tuesday asserting that there’s been
gay marriage
Scaring them straight in the name of morality
Pesha Magid | Since what has become known as the ‘gay marriage’ video was released on August 29,
HIV/AIDS
Even if we can cure AIDS, do we really want to?
Amani Massoud | When the Egyptian army’s medical team announced it had invented two devices to detect and cure