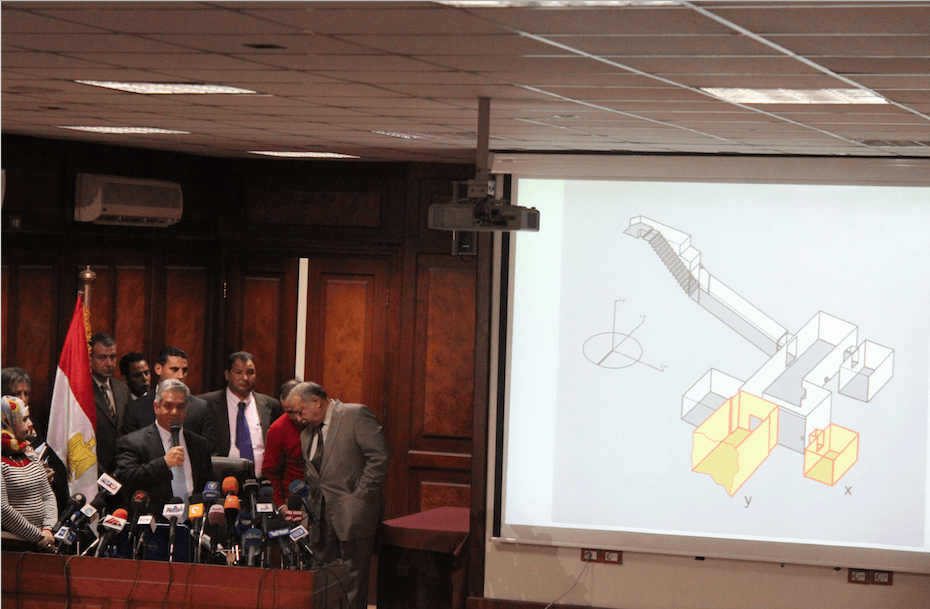 On Thursday, the results of radar scans strongly indicated the existence of secret hidden chambers within the royal tomb of Pharaoh Tutankhamun in the Eastern Valley of the Kings in Luxor (formerly Thebes).

Does this reveal the existence of Queen Nefertiti’s or other royal burial chambers within this tomb? Not yet, but it could. At a press conference at the Cairo headquarters of the Ministry of Antiquities, Minister Mamdouh al-Damaty announced the results of radar scans which had been conducted on King Tut’s tomb on November 26 and 27.

“We were 90 percent certain that there were additional chamsbers inside the tomb, now we are more than 90 percent certain, almost 100 percent sure,” the minister said. Another scan, with more advanced technology, would be conducted on March 31, and the results will be announced the following day at a press conference outside King Tut’s tomb.

The results had been analyzed in a specialized lab in Japan. Citing the radar specialist who conducted these scans, Hirokatsu Watanabe, the minister explained that “there may be two chambers or empty spaces which are found inside” King Tut’s tomb.

Damaty added that at least one of these hidden chambers appears to contain both organic and metallic elements within it.

“With these next scans we will be entering an important new phase. This phase will involve a growing team of experts along with the use of more advanced radar scanning equipment” said Damaty. The minister added that a specialized committee formed by the ministry would be involved, together with experts from the University of Arizona, Cairo University, along with several foreign and Egyptian archaeologists.

Nicholas Reeves, the UK archaeologist and professor of Egyptology at Arizona University, who championed the idea that this tomb may have originally been built there for Queen Nefertiti (Tut’s mother-in law, wife of the religious reformer Pharaoh Akhenaton – Tut’s father) and burial treasures deposited, but was instead dedicated to the boy king.

He had published a book on this theory and other historical questions in 2015, entitled “The Burial of Nefertiti?”

In October of that year, the Ministry of Antiquities officially announced its approval to test this theory on King Tut’s tomb, using non-invasive radar and thermal scanning technology. Later that month, the ministry announced its approval of the use of infrared thermography and radiography to scan the pyramids in hopes of discovering hidden chambers, passageways and shafts.

Thermographic and infrared scans were conducted by a French team in November, but did not yield any conclusive information.

If Reeve’s theory proves to be correct, then Nefertiti’s lost chamber will be the second royal tomb to be discovered intact since Tut’s tomb was discovered in 1922 by UK archaeologist Howard Harter.

According to Damaty, “One of the family members of King Tut may likely be buried within. It maybe Nefertiti as Reeves suggests, or it maybe another female relative … We will have to wait and see.”

The minister concluded that the upcoming radar scan on March 31 represents “a rediscovery of Tutankhamun and his tomb. For Egypt, it’s the discovery of the century.”

King Tut’s body was itself scanned several times. His mummy was x-rayed in 1968 and 1978 and underwent CT scanning in 2005, revealing that the teenage pharaoh suffered from malaria, ill-health, and a broken leg which may have become infected and potentially led to his death.

Topics
Related
antiquities
After 3,300 years, tomb of King Tut’s wet-nurse opens to visitors
For the first time since it was constructed, during the 18th Dynasty of the New Kingdom (circa 1320 BC),
Ancient Egyptian artifacts
King Tut’s beard is back, no damage caused by glue mishap
The ornate beard that Egyptian museum workers accidentally knocked off King Tut’s mask and hastily