Are you Orange?
By
Mada Masr 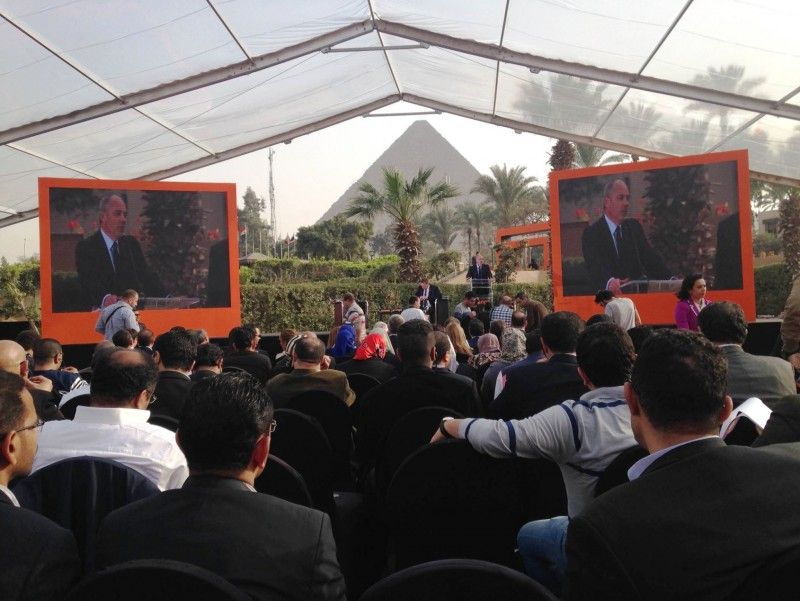 After months of a relatively downward slope, the stock price of the telecom operator formerly known as Mobinil shot up more than 50 percent in the week after the company rebranded as Orange.

On March 8, Mobinil began using the name of its France-based holding company, one of the final steps in a years-long legal battle between the former major stakeholders in the country’s flagship mobile operator, which included telecom tycoon Naguib Sawiris.

But behind the quirky rebranding is a long battle for control over Egypt’s first mobile operator, and the story of Sawiris’s foray into telecoms.

“Egypt is the latest subsidiary of the Orange Group to adopt the Orange brand,” the company said in a statement. The move entails rebranding a total of 250 retail shops and 20,000 points of sale.

Though the stock itself is still trading under the Mobinil brand on the Egyptian Exchange (EGX), its price shot up from LE93.50 to LE101.09 on the day of the announcement. The uptrend continued in the following days, reaching Monday’s closing price of LE139.15, a height the stock has not seen since March 2015.

The stock gained a total of LE47 over the week, an increase of 51.4 percent. The telecom sector in bulk, which constitutes 12.5 percent of total market capitalization, has risen by 5.5 percent since last Monday as the overall market saw healthier numbers across the board.

Orange, which is 25-percent owned by the French government, can now count among its global figures a total of 33.4 million customers in Egypt, where it has more than 33 percent of total market share. Being the group’s largest operation in terms of customer numbers, Egypt contributes over 27 percent of the company’s revenues for the Middle East and Africa region, where Orange is present in 19 countries.

Following the rebranding, the company must now work on renaming its stock on the EGX and increasing the number of shares on offer in the market, since it is now trading below the minimum listing requirements.

According to listing rules, buying a stake greater than a certain threshold automatically triggers a mandatory tender offer to minority shareholders at the same value. The company must also offer an additional 15-20 percent of its shares on the market in order to meet minimum listing requirements.

The transaction and rebranding is a result of a long-running dispute between Sawiris’s Orascom and France Telecom, which used to jointly control Mobinil.

Originally founded by Sawiris, Mobinil was a joint venture between his company — formerly called Orascom Telecom, and now Orascom Telecom Media and Technology (OTMT) — and what was then France Telecom.

Sometime in 2007, however — around the time of Etisalat’s entry into the market as the third mobile operator after Vodafone — the strategic vision of the two major stakeholders began diverging. In turn, counter buyouts were planned and a bidding war ensued. Eventually, the companies resorted to international arbitration and, years later, it was ruled that Sawiris had to sell his shares to France Telecom, which later came to be called Orange.

In May 2012, France Telecom acquired a controlling 94 percent stake in Mobinil. At that time, the company had bought 93.9 million of the 100 million outstanding Mobinil shares for a total of US$3.15 billion, according to Reuters. In 2013, France Telecom as a whole was rebranded as Orange.

Meanwhile, Sawiris’s OTMT maintained its 5 percent direct stake in Mobinil until February 2013, when Orange bought it out in a deal worth US$240 million. Orascom also gave up its voting rights in the mobile operator. This brings us to last week’s share acquisition, a final step in Orange taking over ownership of Mobinil.

In a statement, Orange said it will leverage its know-how to “improve the quality of service for customers,” including the launch of its first Smart Store in Cairo, which showcases the solutions and services offered by the company in the fields of “care, fun, tech, money and tariff.”

The company’s presence in Egypt is also set to open up access to Orange’s global products and services, as well as company-branded devices.

On Monday, Orange had to come out in its own defense after news circulated of its presence in Israel through the main telecom operator there, Partners Communication. However, “Partners Communication is no longer using the Orange brand,” the company said in a statement.

According to a Reuters article from February, Partner Communications cut ties with Orange after a heated spat triggered by statements from Orange Chief Executive Stéphane Richard in June saying that he would terminate the licensing arrangement with Partner “tomorrow morning” if the contracts allowed.

Partner had been operating under the Orange brand since it was founded in 1997, but has since rebranded with a new name and logo.

“The mobile operator in Israel is not Orange. Orange is present in Egypt, Jordan, Tunisia and soon in Morocco, in addition to a lot of European and African countries,” clarified the statement.

The company’s Egypt CEO Yves Gauthie has also weighed in on the ongoing debate over the country’s planned fourth mobile license, telling the state-owned news site Ahram Online that an additional operator would harm the market as well as investments.

The controversial debate over Egypt’s fourth mobile license and the kind of regulations that would be employed to introduce a fourth player on the market is already shrouded in a mystery that reflects the competition and power dynamics inherent in Egypt’s telecom sector.