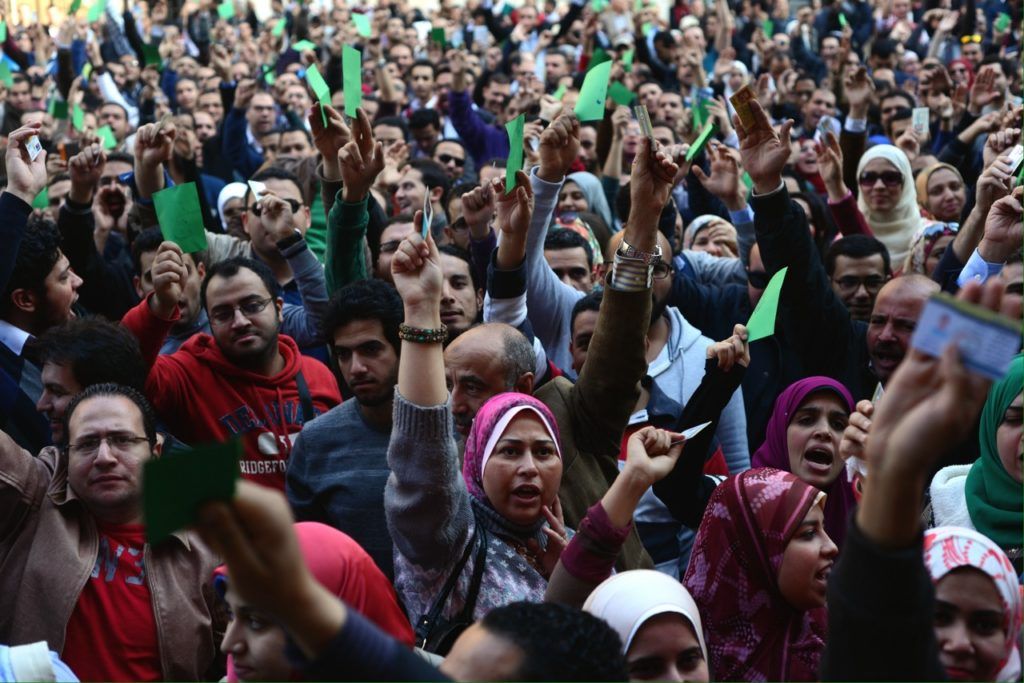 The Egyptian Doctors Syndicate has notified the Ministry of Interior of a nationwide protest by doctors on Saturday inside public hospitals “against repeated attacks against medical staff,” according to a statement by the syndicate.

The protest is an escalation of actions in response to a series of police violations against medical staff in public hospitals.

Last Friday, the Syndicate’s General Assembly held an emergency meeting to decide on a nationwide strike if their demands were not met. These demands mainly include holding accountable those policemen who have assaulted medical staff.

Syndicate and media reports said that around 10,000 doctors attended the meeting, where they chanted against police abuse. But the move by the syndicate has prompted a smear campaign against doctors, with accusations emanating from a range of sources.

The Christian website Copts United said of the doctor’s that they “chant against military rule, and unjustly accuse the Ministry of Interior or alleged violations,” stating that the syndicate meeting “was not a call for doctors’ rights.”

Copts United also claimed that the doctors involved are members of the April 6 Youth Movement and that the Islamist Jama’a al-Islamiya group supported the protests.

“The demands are endorsed by the leading figures in the outlawed Muslim Brotherhood. The group is using the doctors’ protests to call for ousted president Mohamed Morsi’s return to power,” the article added, before concluding by describing the doctor’s demands as “contemptible.”

In an episode of his TV show “Al Malaf,” aired on February 11, broadcaster Azmy Mogahed responded to the claims of the doctors by accusing them of “medical malpractice.”

“I confirm to you that Mona Mina [deputy head of the Doctors Syndicate] as well as George Ishak [activist and member of the National Council for Human Rights] are affiliated with the Muslim Brotherhood.”

Both Ishak and Mina are Christians and were public critics of Muslim Brotherhood rule during the presidency of Mohamed Morsi.

Meanwhile, in public statements Mina warned against the political exploitation of the doctors’ actions, reiterating to participating medics that they must stick to the syndicate’s demands.

Other media sources focused on alleged violations by doctors. The website of privately-owned newspaper Youm7 reported that police arrested “members of a prostitution ring, including a doctor” in Daqahleya, in the Delta region.

The same outlet published other news of a “doctor who was arrested for homosexuality after police inspected his Watsapp conversations, and confiscated his phone as evidence of his guilt.”

The newspaper also cited a number of citizens who “filed complaints to the police against doctors for refusing to treat them.”

“There is an outrageous smear campaign against us now, but it will not stop us from demanding our rights,” Dr Khaled Samir, member of the Doctors Syndicate, tells Mada Masr.

“We are staging silent protests nationwide in all hospitals, without obstructing their work, regardless of whether or not the Ministry of Interior allows us to,” Samir says.

In addition, Samir says that the Syndicate has informed the Ministry of Interior of planned protests, “only to notify them of the planned protest on Saturday and not to ask for a prior permission.”

Meanwhile, no conciliatory moves have yet been made by the government with regard to the doctors’ demands. A meeting between a syndicate delegation and Prime Minister Sherif Ismail has been postponed, according to the syndicate’s media committee, stating that Ismail had another meeting with governors.

However, the Health Minister called for a meeting to be held next Monday with the members of the General Assembly of the Doctors Syndicate, Samir says.

“Doctors will open their privately owned clinics to treat patients for free on March 19, and the assembly is holding another meeting on March 25 to discuss the situation. We will not stop until we get our rights,” Samir stresses.

The syndicate’s demands have been echoed by five other syndicates, which announced their solidarity with doctors, including the syndicates of engineers, actors, pharmacists and lawyers, as well as the Freedoms Committee of the Journalists Syndicate.

The Lawyers Syndicate also established a “special committee of its leading figures to support the Doctors Syndicate’s members with legal aid and advice.”

Topics
Related
attacks on doctors
Update: Doctors mobilize against police violations, vote for dismissal of health minister
The Doctors Syndicate has demanded the sacking of the Health Minister and his referral to the syndicate’s
attacks on doctors
Are doctors entitled to strike?
Mohamed Hamama | Criticism of doctors strikes by government figures and television hosts are an attempt to divert public
attacks on doctors
Doctors close Matareya Hospital in protest over police intimidation
Matareya Hospital in northeast Cairo has been closed for two days due to reports of police intimidation