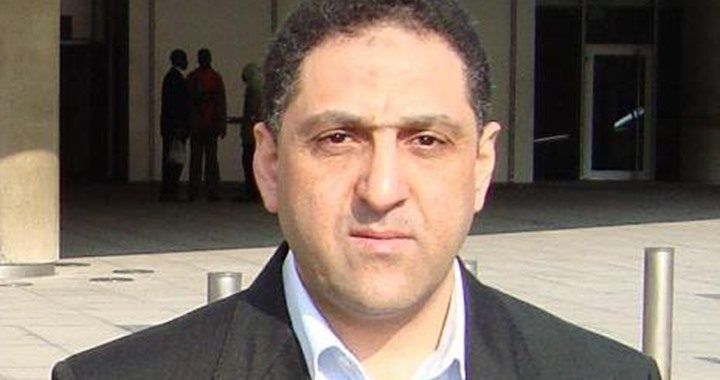 This and the charge of belonging to an outlawed organization are the basis for the journalist’s detention since October. Gaafar was arrested when police stormed the office of Mada (not to be confused with this outlet), which remains closed, and on Tuesday the State Security Prosecution extended his pre-trial detention by 15 days for the ninth time.

Gaafar’s case is the first application of an amendment to Article 78 of the Penal Code by President Abdel Fattah al-Sisi in September 2014, criminalizing the receipt of foreign funds in any form “with the aim of pursuing acts harmful to national interests, an equivalent to that or other.” If he is found guilty, Gaafar faces 15 years in prison based on the stipulations of the amended article.

But a past relationship between state-affiliated bodies and Mada suggest a different image of the media development organization.

Mada was registered at the Social Solidarity Ministry as an NGO in 2010. Its work focuses on training and awareness campaigns in the fields of women issues and national unity.

Kawthar al-Khouly, head of the Noon Center for Women and Family Issues, a sub-division of Mada, recalls being shocked to see masked men with weapons raised storming their office in October, when the institution worked with the state to further the causes it adopted.

Security force detained the staff for 12 hours, then arrested Gaafar and confiscated dozens of laptops in addition to money in the office safe.

“We didn’t see ourselves as civil society that’s against the state,” Khouly says.

Noon of Civilization, one of Mada’s projects, was set up in collaboration with the National Council for Population as well as UN Women for three years starting in 2012. One result of the collaboration was a series of short films aiming to clarify misconceptions about Islam’s view on women’s issues. The project also trained Al-Azhar scholars on how to address these issues.

In November, one month after Gaafar’s arrest, the governmental Arab Women Institution headed by Mervat al-Tellawy awarded the Noon Center its Best Media Production on Arab Women Award 2015 for short films produced within the Noon of Civilization project.

Khouly headed to the ceremony unsure of whether the prize would be withdrawn or if there was some misunderstanding. But she received the award and all went well.

With a masters and pre-doctoral studies qualification in political science from Cairo University, Gaafar also worked as a consultant with several organizations, including the National Council for Population, which he collaborated with to create a national strategy for population in 2013 alongside UNICEF.

Mada Masr reached out to Vivian Fouad, an official at the National Council for Population and coordinator for the Empowerment of the Egyptian Family Initiative, on which the council collaborated with Mada Foundation, but she declined to comment. This collaboration has resulted in the empowerment of Egyptian families bill in 2011.

Mada Foundation has also collaborated with Al-Azhar on training programs and papers related to revamping religious discourse. Manar Tantawy, Gaafar’s wife, says he is personally invested in returning Al-Azhar to its former leading role and has worked directly with the grand imam of Al-Azhar himself.

Before founding Mada, Gaafar was editor-in-chief of Islam Online from its establishment in 1999 to its closure in 2010. Khouly says the website, an information portal on everything related to Islam, was often confused for the Muslim Brotherhood-affiliated Ikhwan Online. That and Gaafar’s focus on issues related to Islam may be why he is accused of belonging to the Brotherhood. But  Khouly says the Brotherhood actually opposed and attacked Gaafar for his propagation of an interpretation of Islam that differed from theirs.

“Someone who has produced work like Hesham Gaafar for important causes should be honored by the state, not be treated unfairly like this,” she says.

Tantawy, an engineering professor at a private educational institute, laments what she calls the intentional mistreatment her husband has faced since his arrest.

She says she was stunned when police stormed her house on the same day Mada’s office was raided and was not sure who the target was until an officer said her husband was being held handcuffed and blindfolded in a car near the house. Tantawy was detained in her house for 17 hours before the police left, confiscating laptops and research material belonging to Gaafar and herself in addition to her car keys and driving license, none of which have been returned.

Gaafar is now detained, pending investigations, in Aqrab Prison, the country’s most notorious in terms of detention conditions. Tantawy has faced difficulties getting urgent medication to Gaafar for a chronic eye condition that threatens him with blindness if untreated. She is now focusing her efforts on getting him transferred to a facility with better conditions.

Mohamed Baker, Gaafar’s lawyer, says Mada Foundation had acquired all necessary permits from the Ministry of Social Solidarity and that its projects were conducted under the eye of the ministry. He adds that Gaafar’s work was all conducted in coordination with the state, starting from Essam Sharaf’s post January 25 interim government to the Supreme Council of the Armed Forces to each government that followed.

Human rights lawyer Ahmed Ragheb says political factors must be behind the state’s conflicting positions toward Mada, particularly as state bodies collaborate with the international institutions Mada worked with. He doesn’t rule out the possibility that a lack of communication between various state institutions might also partially explain the contradictions.

Rights defenders and lawyers have warned against the precedent of using the foreign funding amendment in the Penal Code for the first time against Gaafar.

Ragheb explains that the vague language of the article, which uses “or other” in its description of the crimes that fall under its scope, could incriminate a vast sector of people including students who receive scholarships, researchers who receive fees for their work from international organizations and other legitimate activities.

Several rights organizations issued a statement last month condemning Gaafar’s detention and the use of the foreign funding article, fearing that it “lays the groundwork for the confiscation of the right of academic research and freedom of information.”

“The assumption of bad faith, ostensibly proven by his failure to obtain security approval prior to the research,” the statement reads, “holds out yet another entry point for security control over the free flow, exchange, and even analysis of information, which is already severely curtailed due to the lack of a democratic law regulating and guaranteeing freedom of information.”

Topics
Related
Hesham Gaafar
Journalist Hesham Gaafar’s detention renewed by 15 days for 7th time
State Security prosecutors renewed the detention of journalist Hesham Gaafar on Sunday for another 15
national security
President amends law to include life sentence for receiving funds, arms
President Abdel Fattah al-Sisi issued an amendment to the Penal Code on September 21, penalizing the
2014 Constitution
Law to hush up NGOs
Ahmed Ezzat | Along the lines of the protest law, which the government enforced to restrain the public sphere and hinder