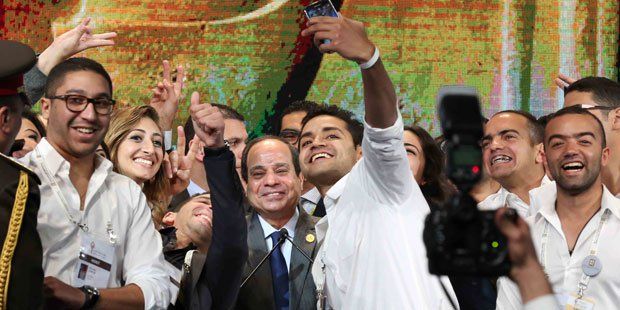 The nation’s “best young people” gave their lives to bring new blood into government, President Abdel Fattah al-Sisi asserted in a pre-recorded televised address on January 24 to mark the fifth anniversary of the 2011 revolution.

Praising the “youth of the revolution,” Sisi said, “If Egyptians are the weapon of the nation, you [the youth] are its ammunition,” adding that the revolution’s “loyal children” are not responsible for any unfortunate turns the uprising may have taken.

On the surface, it might appear surprising that a president who recently sanctioned a crackdown on youth movements, cultural spaces, revolutionary groups and online forums would so publicly praise the nation’s “revolutionary youth,” but as 62 percent of the population are under 29 years old, according to the New York-based nonprofit research organization The Population Council, it makes a lot of sense for the government to go out of its way to court young adults.

The ‘youth’ and the republic

In his article “Imagined Youth,” Ted Swedenburg describes youth as “a concern for the state,” in that governments seek not just to protect young people from danger, but also to ensure they “do not deviate from the transcendent goal of maintaining the integrity of the nation.”

“Youth” is a social construction, a fluid marker that can be used to describe people anywhere between the ages of 15 and 40 years old, and is often linked by governments, policy makers and researchers to societal issues such as marginalization, disaffection, radicalization and unemployment. The perception and construction of youth as a category is a form of population-sorting and control that isn’t particular to Sisi’s government, or to Egypt in general.

Young citizens have historically been positioned by the state as a priority due to the threat of their large numbers and able bodies.

In the 1960s, former President Gamal Abdel Nasser introduced the Pioneering Organization program — a youth wing of the Arab Socialist Union — to foster young leaders. The program was based on a Soviet model of youth organization, but its activities halted in 1968 when many young people left the organization at odds with Nasser’s brand of Arab socialism. Some of them later became involved in the student movement of the 1970s.

While Nasser channeled youth and student activism into state-sponsored initiatives with the aim of building model citizens for a model nation, his successor President Anwar Sadat sought to divide a powerful student-worker movement that emerged in the 1960s and 1970s by sponsoring Islamist student organizations on university campuses to counter the strong influence of Arab secular nationalist ideology under Nasser. These groups, known as Jama’a al-Islamiya, turned on Sadat after he signed a peace treaty with Israel, and heavily criticized his pro-Western stance. In response, Sadat rounded up and imprisoned many of the groups’ members, a tense dynamic that eventually resulted in his assassination. Politically engaged young people moved from disappointment in Nasser’s national promise — especially after the 1967 defeat in the Six-Day War with Israel — toward attempted resistance against Sadat’s crackdown. Novelist Sonallah Ibrahim explains that this crackdown was an attempt to counter liberal or leftist tendencies in general, particularly the national ambition enshrined in Nasser’s rule.

Large numbers of young people participated in the student movement of the 1970s. But “there has also always been a counter-rhetoric of another type of young person — entrepreneurs and those willing to work for the sake of the country, with very little in return,” says Aida Seif al-Dawla, a psychiatrist and long-time activist. This conception of youth fits the notion of a neoliberal contract between governments and citizens that has been globally normalized: the idea that young people will grow up, contribute productively to society and raise families that will in turn do likewise.

And this is a conceptualization of youth to which Sadat’s successor, ousted President Hosni Mubarak, resorted when, conscious of an aging leadership within the ruling National Democratic Party (NDP), he made a point of giving young leaders prominent positions within the party’s ranks. Mubarak gave his son Gamal a degree of influence in what was widely believed to be a quest to eventually transfer power. Taking on the assigned role, Gamal was the regime’s young face, with a mandate to attract fellow youth. It was hoped they would identify with him, rather than the regime’s old guard.

The NDP started focusing on employment in the private sector, which didn’t address income disparities or chronic unemployment. In 2009, the party started a new social media strategy, inviting young people to discuss issues of public interest with Gamal Mubarak in an effort to promote participation and counter the growing influence of political groups like the April 6 Youth Movement. Mubarak also imposed an emergency law, appointed regime-loyal stooges in universities and heavily cracked down on any student activism or oppositional youth movements.

“The extent to which the NDP encouraged youth political engagement was within the confines of securing it in the realm of the political elite’s own power, control and security,” researcher Nadine Sika writes in her 2012 journal article, “Youth Political Engagement in Egypt: From Abstention to Uprising.” She describes the NDP’s strategy as one where young people with an interest in furthering their own careers and businesses were engaged, but a strategy that ultimately did very little to encourage broader social and political participation.

The ‘youth’ as a threat

Young citizens have historically been positioned by the state as a priority due to the threat of their large numbers and able bodies. Youth disillusionment and frustration have been widely cited as the reasons for low election turnouts, and Egypt’s youth have consistently been used as currency among policy makers.

Sisi’s government has established a number of projects aimed at providing employment, training opportunities and integration for young adults, including introducing youth quotas in the Constitution-drafting committee, and nominations to parliamentary elections and local councils.

The newly established Presidential Leadership Program (PLP) seeks to prepare young people for positions in government. It is open to Egyptians under 30 years old with a university degree and no criminal record. The program includes visits to the Armed Forces’ Morale Affairs Department, military special forces, air defense and naval forces and the Military Academy. Topics to be discussed include social sciences and governance, public administration, entrepreneurship and national security. The program’s proposition is centered on a certain kind of youth: those willing to embody the characteristics of “good citizens” — i.e., support the national wheel of production, not undermine state institutions by their words or actions, not adopt extreme religious views, vote and so on.

Youth inclusion aside, the prevalent concern of the current regime is to divert young people away from religious extremism, especially in the wake of the ouster of the Muslim Brotherhood from political life and the rise in militancy. In a speech at the United Nations General Assembly in October last year, Sisi stressed that investment in Egypt’s young people would “prevent them from being attracted to extremist and terrorist groups.” He ordered the Cabinet to establish a group of ministries to cooperate with specialist institutions to revive the role of “culture,” expand cultural and artistic events and establish art competitions in schools and universities, which he announced in a speech on January 9 to inaugurate Cairo’s Knowledge Bank initiative. Sisi also spoke of developing sporting activities for young people, “because sport transcends morality and spirit.”

When asked why the current government is focusing on youth programs, Neamat Saty, head of the Egypt’s Central Unit for Parliament and Civil Education says, “Who is more important than the youth? They are the present and the future, and they constitute a large percentage of the population. They are the main engine of events. Sisi sees the importance of the role of the youth, and that’s why he addresses them and thinks we should give them attention. They will be the leaders of the future.”

“Our work focuses on preparing young people for the political sphere, creating national education programs and preparing youth for Parliament and executive positions in government,” Saty adds, speaking of an initiative that her unit runs called Egypt is Young. First initiated in the Delta city of Gharbiya, the initiative focuses on training in universities and youth centers, as well as simulations of local council and parliamentary sessions.

“Before the state makes plans for young people, they should be free,” says Aida Seif al-Dawla.

More recently, Sisi pointed to a palpable “youth crisis.” He spoke to host Amr Adeeb on Al-Qahera al-Youm (Cairo Today) about youth anger, in the wake of ultras football fans’ protests on February 1, 2016, the fourth anniversary of the Port Said Stadium disaster that left 74 fans dead. He stressed it is his job to placate young people who are unhappy with the practices of security forces, and challenged the hardcore football fans to nominate 10 members to form a committee to investigate the incident.

During the interview, Sisi also mentioned the arrest of satirical cartoonist Islam Gawish, who was arrested the day after he posted a cartoon mocking Sisi. Gawish was held overnight in prison for ties with a news website that authorities claimed was operating without a license. Sisi asserted he has nothing personally against Gawish and is open to criticism.

“It’s us who are not able to properly communicate with them [the youth]. We are the ones who are unable to find common ground. I’m exerting a lot of effort in this regard, and am aware it will need time,” Sisi admitted.

“I think the real young people Sisi wants to reach got to the point of fearing there is a 99.9 percent chance they won’t go home after meeting him or anyone who represents him,” says 23-year-old graphic designer and filmmaker Hossam Kamel.

After Sisi’s interview, social media users began posting images of detained youth and a cartoon by Gawish with the president asking young people to trust him, then arresting them, with the hashtag “Youth inclusion.” Others sarcastically commented on news that Sisi has allocated land on the Cairo-Alexandria Desert Road for a new prison, asserting that the kind of youth inclusion the president is interested in is incarceration, with thousands of Islamist, liberal and secular youth jailed since Sisi was elected president in 2014.

“Before the state makes plans for young people, they should be free,” Seif al-Dawla says.

“I believe the kind of youth they [the government] prefer say ‘yes’ and support them in anything, even when they don’t understand it,” Kamel adds. “I think the government must learn how to see people as human beings, not as a document … and learn that they work for us, actually, not the opposite.”

For Ibrahim, the overall perception of the youth as a threat, and hence the need for special interventions, is counterproductive. He says the term “youth” is used as a substitute for “revolutionary tendencies” by politicians, “because they want to highlight a contradiction between generations that doesn’t exist.”

AD
You Might Have Missed
Carbon Colonies & A Green New Deal
Where do old lesbians go to die?
What we talk about when we talk about trees
Mugamma revisited: Reimagining the building and the square
AD
Laura Bird
29 articles on Mada