Thousands of fish go belly-up in the Nile Delta, and with them an industry

Dead fish by the Nile in Fuwwah
By
Nada Arafat

Stepping off a small boat as it docks along the Nile, Ahmed Khaled, a 22-year-old fisherman, looks dissatisfied. For the fifth consecutive time in just three weeks, he carefully prepared the lures and rigs of his fishing equipment and set out in his ill father’s sailboat, only to come back empty-handed.

“The fish are abundant,” Khaled says, waving his arm out across the Nile. “But they are all dead.”

Khaled and his neighbors in Fuwwah, a small fishing town some 150 km north of Cairo in the Nile Delta, woke up in late December to fish. There were thousands of them. Piles of glimmering scales catching the daylight as they washed up, cold and dead, onto the banks of the narrow tributary. Many of the locals scoffed at the sight of so many dead fish, but perhaps they shouldn’t have — this is a sight that repeats itself every single year.

Every January, thousands of dead silver carp overflow the town’s shores. And every year, almost in sync with the fish as they begin to overwhelm the riverbank, the government shirks responsibility.

The fate of Fuwwah and its fish is also the fate of thousands of jobs, and the viability of a once-lively industry that in its heyday exported goods abroad and fed thousands of Egyptians nationwide.  As Fuwwah’s fish continue to float to the surface belly-up, so does an important niche of the economy. Meanwhile, the government seems unable or unwilling to resolve this annual crisis.

The government body responsible for developing national fish resources, the General Authority for Fish Resources Development (GAFRD), says it has no authority over Nile resources, passing the blame to the Ministry of Irrigation, which in turn pins the issue on fishermen.

History suggests the government’s finger-pointing is a bit unfair. The government introduced silver carp to the Nile back in the 1980s, believing they would help eradicate pests in the Nile — especially plankton — and prevent schistosomiasis (also known as bilharzia, a parasitic disease caused by freshwater snails and worms). Fishermen found that the silver carp population expanded faster than other fish, and that breeding them was simple and cheap. Fishermen put them in cages and fed them with massive amounts of poultry farm waste, but this caused river pollution. They also put tree trunks near the banks of the river, allowing them to decay and provide a favorable habitat for the fish to lay their eggs. These incubators, however, caused additional damage, since the process of decay depletes the water of oxygen.

The Irrigation Ministry tried to cut down on river pollution in 2013 by changing the law. A new amendment to the Nile Protection Act criminalized the fishery cages, and the ministry cracked down on those breaking the law.

“The Ministry of Irrigation did not consult with us on the matter, nor did they give us time to find solutions,” says Khaled. He explains that in order to dodge raids, fishermen submerge the cages in deeper water — a practice that hides the fish, but also kills many of them due to lower oxygen concentrations in deeper water.

When officials blame farmers for the mass fish fatalities, it is this practice they point to, and not without reason. However, it’s more than just deep water that’s killing the fish.

Located at the northern end of the Nile, Fuwwah and the larger Kafr al-Sheikh Governorate have become a sort of waste terminal for the river.

“The city is highly vulnerable to pollution,” says Kawthar Hefny, head of the Central Department for Crisis Management at the Egyptian Environmental Affairs Agency (EEAA).  The slow flow of water toward the end of the Rosetta branch — the tributary along which Kafr al-Sheikh sits — allows pollution to build and severely damages the river’s ecosystem, pushing species of fish like the Nile perch toward extinction.

Although other government bodies dispute the claim, Environment Minister Khaled Fahmy says the mass dying of fish is not solely the fault of unscrupulous fishermen — reducing the water level in the Nile amplifies pollution caused by agricultural and sewage waste, he explains. An investigation committee formed by the Ministry of Health agrees, naming pollution the primary cause of fish fatalities.

Analysis of the Nile water showed high concentration of ammonia compounds that are mainly present in agricultural, human and other organic waste, according to Hefny. Worse, the lack of a sewage system for the growing populations of communities like the Saieyda and Dahab islands in Kafr al-Sheikh means that human waste is dumped directly into the river.

In late December or early January of every year, Egypt’s water consumption declines and the Irrigation Ministry reduces the flow of water through the Aswan Dam for up to 40 days, a process referred to as “winter closure.” Ministry spokesperson Khaled Wassif explains that winter crops require comparatively little water, which prompts the ministry to ease the load on its irrigation canals and treatment plants. It also means less river water passes through Fuwwah to dilute and flush away pollutants. Mass fish deaths tend to happen around this time.

“Fish die mainly by the winter closure,” says Ahmed Farouk, assistant professor at Kafr al-Sheikh University’s faculty of aquatic sciences and fisheries. However, he notes that submerging cages is also part of the problem.

Farouk is part of a university committee that tests the water. He says samples show high concentrations of NH3 (ammonia) and NH4 (ammonium), both of which indicate that organic waste is breaking down in the river. NH3, a colorless gas, is particularly harmful to fish. It can degrade their respiratory organs, eventually killing them.

When Farouk visited the contaminated areas, he discovered that the effect has spread beyond silver carp. This year, the committee also found dead tilapia, the most widely consumed fish in Egypt — an indication that the problem is getting worse.

The government responded late. The EEAA’s Hefny says the ministry will take several measures to guarantee the water is safe, including regular collection of water samples and overseeing factories close to the Nile to observe violations. However, fishermen, residents and nongovernmental organizations (NGOs) have expressed doubt about how effective these measures will be. One NGO, Habi Center for Environmental Rights, has filed a report with the prosecutor general accusing the ministers of environment, housing and irrigation, among others, of negligence. The Habi Center says the government has only taken measures against fishermen, without addressing the real cause of pollution.

A history of flawed reforms has also made people skeptical. When the government amended the law to provide more protection to the Nile in 2013, they left a major loophole. A report by the Egyptian Initiative for Personal Rights (EIPR) notes that the amendments prohibit dumping untreated industrial waste into fresh surface water and groundwater reservoirs. However, the law does not mention non-fresh surface waters, thereby offering a legal detour for factories to discharge untreated industrial waste into other waterways, including irrigation canals that eventually pour into the Nile. The report also pointed to weak oversight and poor enforcement for existing measures.

In general, the law does not limit pollution. Even GAFRD has a fish farm adjacent to the water treatment facility that serves most of Kafr al-Sheikh and Beheira. Waste from that farm can be seen inside of the water plant. 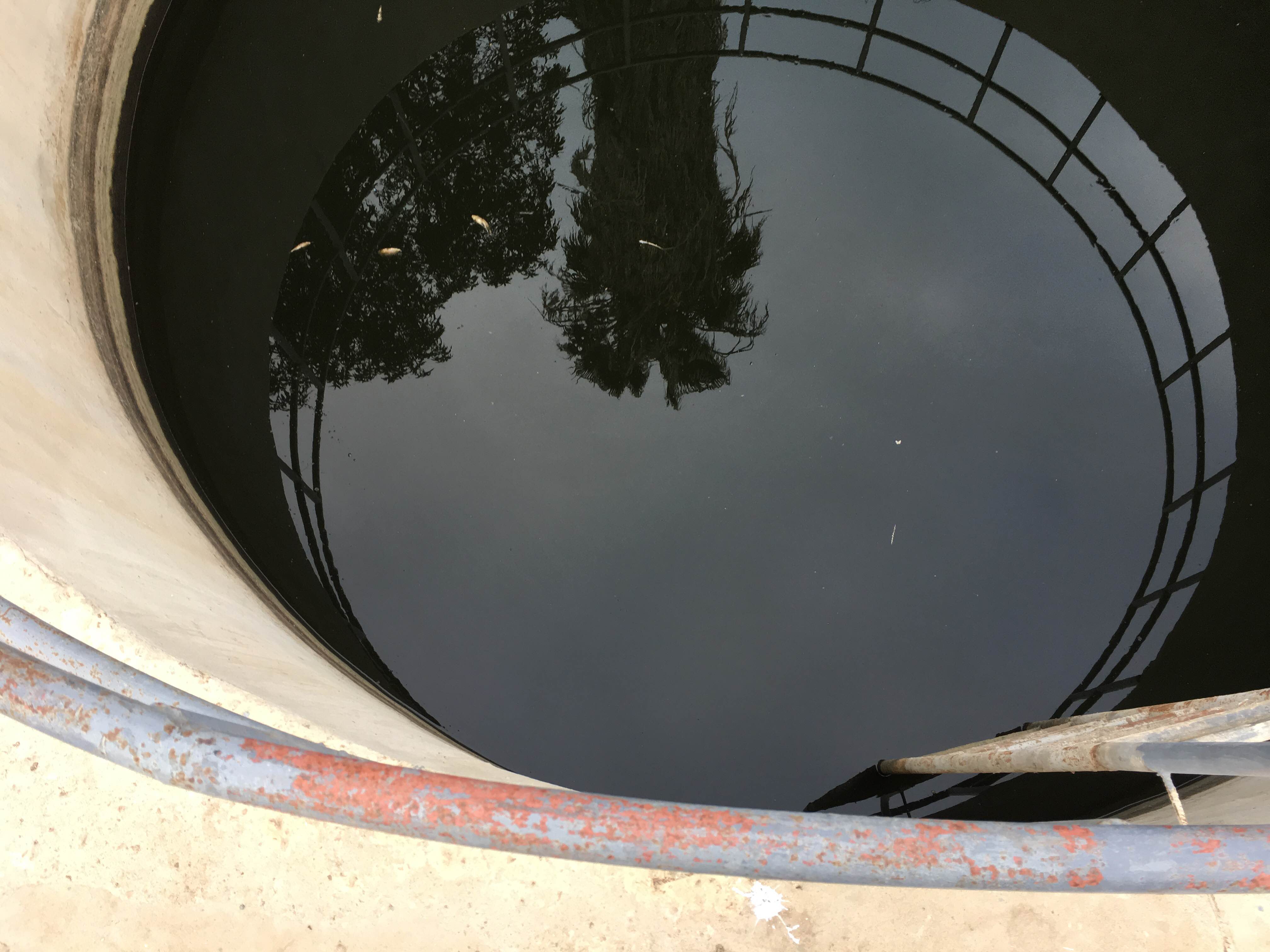 At one of Fuwwah’s main public hospitals, doctors often advise citizens to avoid drinking tap water. But words of warning aren’t enough for people like Samia, a Fuwwah resident and mother to 6-month-old twins. Samia’s doctor advised her to use only bottled water for her infants, but she can’t always afford it. Instead, she says she often boils tap water, a solution that is not always sufficient to deal with serious pollutants.

Water pollution doesn’t just affect public health in those areas. Fish traders risk losing their livelihood at any time. A scarcity of fish — a key source of protein for area residents — has only pushed up the price of poultry and meat, which are seen as substitutes. Meanwhile, people who do eat fish can face problems too, since organic pollutants and other toxins can be passed up the food chain.

Echoing the argument in the government, a group of fishermen stand by the Nile, debating. Some admit they are part of the problem, while others blame factories in Kafr al-Zayat, which they say discharge industrial waste into the river. But they all agree when one fisherman says the government doesn’t care for ordinary citizens. Another concurs: “To them, we don’t exist.”

AD
You Might Have Missed
What we talk about when we talk about trees
Where do old lesbians go to die?
Mugamma revisited: Reimagining the building and the square
Carbon Colonies & A Green New Deal
AD
Nada Arafat
13 articles on Mada

Topics
Related
water scarcity
Water shortages bring suffering to Egypt’s countryside
Nada Arafat | Egypt, once celebrated as the gift of the Nile, is in the grips of a serious water crisis. With a rising
environment
Government commits to reducing pollution in Nile Delta lake
Egyptian officials have agreed to move forward with plans to reduce pollution in Lake Manzala, part of
fisheries
Stolen waters, stolen livelihoods
Nada Arafat | Sheikh Hamada sits by the lake to eat his lunch and recounts times gone by. “In the old days, the water
Egypt-Ethiopia relations
Sharing the Nile waters according to needs
Sharif S Elmusa | There may not be enough water for everybody to get all they want from the Nile’s waters, but sharing