Court upholds 2-year sentence against surgeon, 4 others for protesting
By
Mada Masr 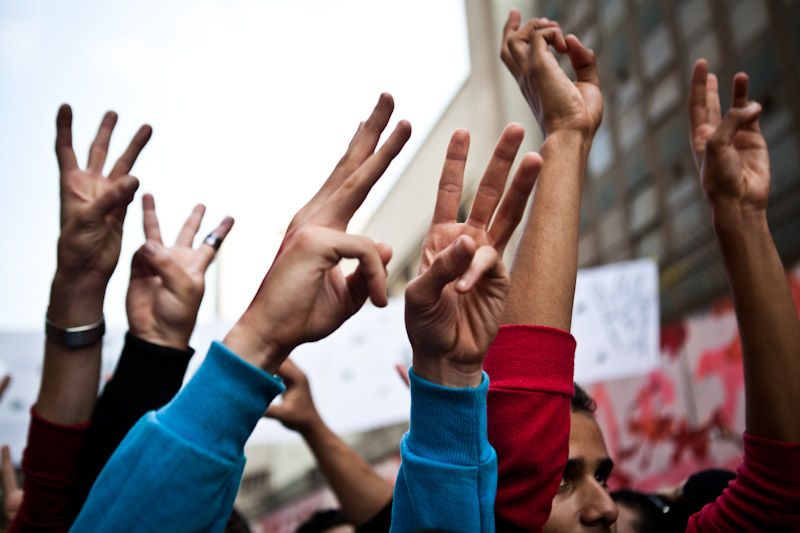 An appeals court upheld a two-year sentence on Wednesday against surgeon Ahmed Saeed and four other defendants, on charges related to a silent stand they held last November in commemoration of the 2011 Mohamed Mahmoud clashes.

The defendants were convicted in December of obstructing traffic and disturbing public order in Mohamed Mahmoud and Mohamed Farid streets.

Member of the Bread and Freedom Party Mostafa Ibrahim is among the defendants, as is Saeed, who lives in Germany and was reportedly on a short vacation in Egypt when he was arrested. Earlier this month, Saeed’s family reported that he was subjected to torture and electrocution in Abdeen Police Station, before being transferred to Aqrab Prison, in the Tora Prison complex.

Saeed staged a hunger strike in December that lasted two weeks, but ended it when his health started to deteriorate.

Lamiaa, Saeed’s sister, said the verdict was shocking, as there was no evidence against the defendants and the Public Transport Authority denied roads were blocked when asked by the prosecution. Despite the official documenation of this in court records, the defendants were still convicted of obstructing traffic.

Meanwhile, another court postponed the trial of April 6 Youth Movement general coordinator Amr Ali on Tuesday to February 1. Ali was arrested in his house in September as part of a wave of arrests targeting activists in the months leading up to the anniversary of the January 25 revolution.

Note: This article originally stated that the defendants were convicted for a protest on 6 October bridge, and has been amended to reflect their sentencing for allegedly obstructing traffic in Mohamed Mahmoud and Mohamed Farid streets.

Topics
Related
Ahmed Saeed
Trial of doctor arrested for protesting postponed
Heba Farouk Mahfouz | An appeals court postponed the trial of a young doctor, sentenced to two years in prison for obstructing traffic and
Ahmed Saeed
5 protesters sentenced to 2 years for commemorating Mohamed Mahmoud
Abdeen Misdemeanor Court sentenced five people to two years in prison on Sunday for participating in
Ahmed Saeed
5 arrested for protesting in memory of Mohamed Mahmoud clashes
Five people were arrested for demonstrating in memory of the deadly clashes between protesters and security