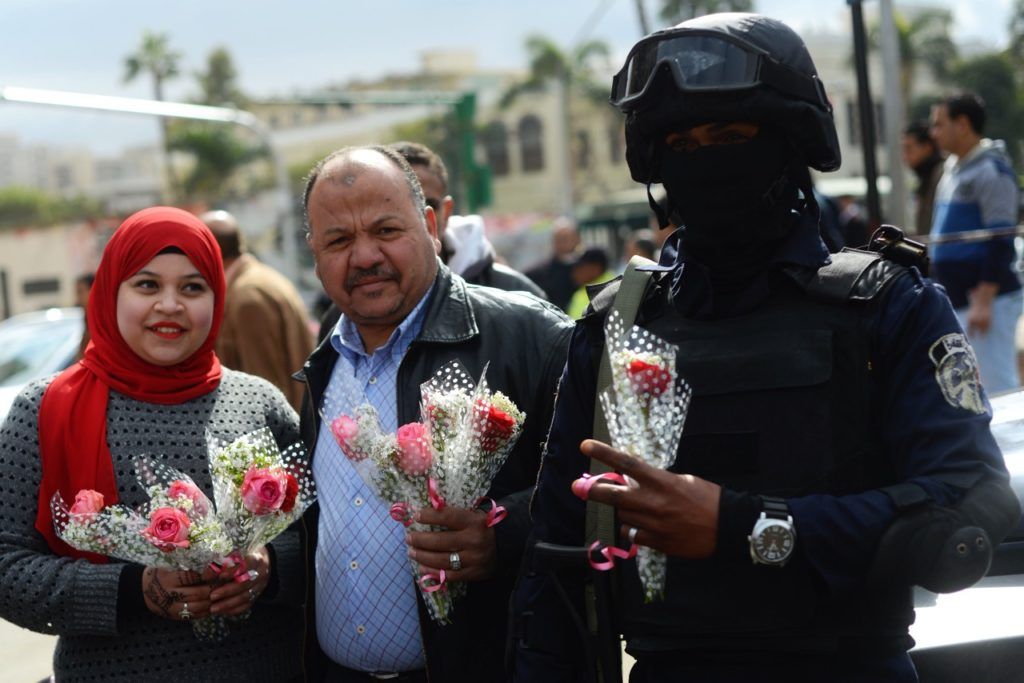 On the fifth anniversary of the January 25 revolution, it was the police that took to the streets, distributing flowers and chocolate amid scattered groups of their supporters and those of President Abdel Fattah al-Sisi.

A celebratory atmosphere was especially present in the prominent Tahrir and Rabea al-Adaweya squares, where crowds cheered for security forces.

In other areas around the country, however, security presence intensified. In Matareya, police quickly dispersed a small protest allegedly staged by the Muslim Brotherhood, according to state-owned Al-Ahram.

Police forces also killed two people in 6th of October City in an exchange of fire. Al-Ahram reported that security forces raided an apartment after receiving information that two assailants involved in attacks in Giza’s Haram district were located there. The two men shot at police officers as they attempted to arrest them, according to the newspaper, leading security forces to respond with deadly force.

Meanwhile, the Interior Ministry stated that it also received reports of an individual storing explosives in an apartment in Kerdasa. Police forces reportedly engaged in an exchange of fire with the suspect, Mohamed Abdel Hamid, eventually killing him. Another alleged member of the Muslim Brotherhood was also shot in Kerdasa, according to a statement by the ministry.

In Beni Suef, a man was killed as he attacked a police checkpoint, according to Al-Ahram. The newspaper did not provide other details.

Topics
Related
Alaa Abd El Fattah
Jan 25, 5 years on: The only words I can write are about losing my words
Alaa Abd El Fattah | Five years ago on what would turn out to be the last normal day of my life I sat down at my desk in a