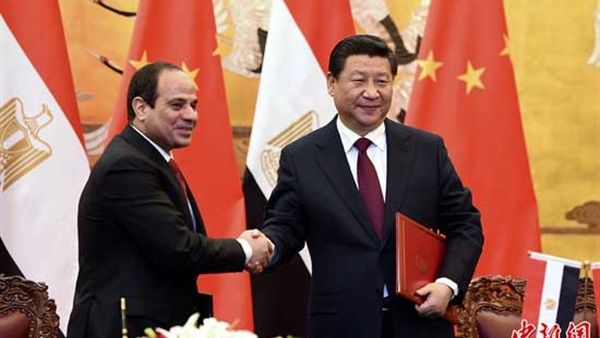 Chinese President Xi Jinping met with Egyptian President Abdel Fattah al-Sisi on Thursday and signed a financing agreement that will see China’s Central Bank transfer US$1 billion to the Central Bank of Egypt (CBE) along with a loan of $700 million to the National Bank of Egypt. An additional $100 million loan was granted to Banque Misr on Wednesday.

CBE Chairman Tarek Amer told privately owned newspaper Al-Masry Al-Youm that the funds will boost Egypt’s foreign reserves and be available to support the country’s general budget. Amer did not clarify the interest rate on the loan, but said it was an eight-year agreement with repayment to begin in the third year.

A $100 million loan to Banque Misr was signed on Wednesday. The loan is for five years, with repayments to begin in the third year, although information on the interest rate is not yet available.

The National Bank of Egypt and the China Development Bank also signed a $700 million financing deal.

The presidents signed a total 21 economic agreements related to energy, banking, transportation and loans, which, according to the state-owned newspaper Al-Ahram, are worth a total of $14 billion.

It is unclear how many of the agreements represent completely new projects and how many mark incremental progress in deals struck over the past two years between Egypt and China.

In 2014, following President Sisi’s first state visit to China, the two countries signed 25 bilateral agreements for cooperation in several areas, including energy, transportation and electricity. Sisi made a second state visit in 2014 that resulted in further deals, including LE50 billion in deals for energy projects, small business loans and a memorandum of understanding for the construction of Egypt’s new administrative capital.

Some of the agreements appear to be new, including the $1.7 billion financing for national banks and the agreement to build an electric railroad to Egypt’s as yet unbuilt — but legendary — administrative capital.

The trip is part of a larger five-day tour Xi is taking through the Middle East. The Chinese president stopped first in Saudi Arabia and will move on to Iran after Egypt.

During a joint address to the Arab League with Sisi, Xi stated that he supported Egypt’s efforts to maintain stability as well as its efforts to develop its economy. He also invited Sisi to attend the G20 summit in September.

Xi also asserted his support for a Palestinian state and the re-establishment of the 1967 borders with Israel, reported Al-Masry Al-Youm.

Sisi focused on the importance of security and his hope that Egypt and China would increase bilateral relations to address various crises in the Middle East. He said, “I would like to emphasize our discussion on the need to redouble our common efforts to combat the threat of terrorism and extremism, which threatens international peace and security.”