اقرأها بالعربية
As it was seen: Looking back at filmic representations of 1967

Many who served in Egypt’s army during the 1967 war, forced to walk home because the military could not afford to shuttle them, tell harrowing stories of vicious attacks by civilians disenchanted by the resounding defeat and how the “people’s army” betrayed its people by losing morale and strategic resolve as Israel invaded and occupied Egyptian territory.

The defeat marked the end of the post-independence project as fashioned by Gamal Abdel Nasser and the Free Officers. The Arab socialist republic that inspired colonized nations in the region and beyond, and that fuelled dreams of millions for a united, free Arab land, was crushed. Not just a strategic defeat, but a morally crushing defeat that would redefine the shape, orientation and mood of the Egyptian state and society for decades to come.

In the third Mada Encounters seminar, which took place in November, we looked at the cinematic representations that followed the defeat. We did not make a chronological or categorical selection, but focused on how the sudden realization of loss found its way into the works of Egyptian filmmakers and how they chose to represent that realization. We asked what the storylines and storytelling methods they chose tell us about our society’s collective consciousness and how the remnants of it relate to the here and now.

We selected three films: Hussein Kamal’s Thartharah Fawqa al-Nil (Adrift on the Nile, 1971), Mamdouh Shoukry’s Zaair al-Fagr (Dawn Visitor, 1973) and Said Marzouk’s Al-Mozneboun (The Guilty, 1975). Although they have diverse relationships to the state and to cinema post-1967, all three can be described as “frame stories” — in which an over-arching plot sets up more important smaller narratives — for a cinematic post-mortem. Deaths are central to their whodunit plots, which involve several suspects and in which the assignment of culpability results in a mass condemnation of both state and society.

Cinema was perhaps the last art form to be co-opted by the post-independence state. In its slow but sure plan to control the media and cultural production, the state made clear steps to take over the arts as early as 1957 with the establishment of the Supreme Council for the Arts and Letters. For the cinema industry, however, an institution was set up with the explicit aim of support: the Organization for Supporting Cinema, established the same year.

It was not until 1963 that studios and distribution were nationalized under the Egyptian General Organization for Cinema, which produced about 153 films until its dissolution in 1971, including classics such as Youssef Chahine’s Al-Nassar Salah Eddin (Saladin the Victorious, 1963), Henri Barakat’s Al-Haram (The Sin, 1965), and Salah Abu Seif’s Al-Qahira 30 (Cairo 30, 1966). About 53 were inspired by novels, mainly Naguib Mahfouz’s, which meant much cinema was confined to a literary formula strictly tied to state-preached social realism.

But nationalization did not transform the industry into one focused exclusively on representations of social realism — most productions remained within the realm of the entertaining and commercial. What’s more, this brand of social realism did not entail any critique of the state, but rather teetered along a fine line of what was acceptable to it. In this context, 1967 and its ramifications offered a small window of opportunity to produce films that were critical of the state and the society it produced.

Adrift on the Nile exemplifies this. Directed by sensationalist director Hussein Kamal, it suffers from the sloppy melodrama that characterizes his other films yet also contains some of the most iconic imagery of Egyptian cinema, specifically in reaction to the war and Nasser’s death. 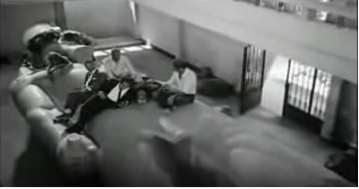 Based on a 1966 novel by Mahfouz of the same name, the film was altered to mirror the reality of the post-1967 defeat. Set on a Nile-side houseboat, the story follows a group gathered around a mediocre film star named Ragab: a journalist, a novelist, a lawyer, a disgruntled bureaucrat (Anis), and some women conducting adulterous relationships with them. The group smoke hashish and deride their surroundings with hysterical, hyperbolic sarcasm, but the bubble bursts when they run over a fellah (farmer) woman who is walking along a highway after participating in a fertility ritual involving ancient Pharaonic ruins. The ensuing events show the group scrutinized by a serious young journalist who sermonizes them on their self-induced stupor and refusal to assume responsibility for what they’ve done — or for the pre-war reality they are part of. The climax sees the houseboat come unmoored and float away as journalist and bureaucrat announce the woman’s death and declare that everyone must turn themselves in.

Anis is the ultimate representation of the post-defeat society. A prophet of doom and a traumatized idealist, he fought in the resistance against the British as a young man and then lived to see the post-independence state liquidate all forms of political organization and participation, resulting in an acquiescent, scared and disillusioned society.

The wounded idealist is reprised for Magda al-Khateeb’s role in Mamdouh Shoukry’s Dawn Visitor. Written by Rafiq al-Sabban, the story also revolves around a deceased woman: Nadia, a politically engaged journalist who pays a hefty price for her activism and, like Anis, is jailed and tortured by the post-independence regime. Unlike Anis, however, Nadia is the victim around which the frame story is constructed, with blame distributed equally among everyone — her selfish husband, her petty neighbors, her brothel-running hair stylist, the secret services, and the whole complacent society. The film suffers from Shoukry’s lack of control over the pace and photography, but Khateeb’s absorbed performance saves it from turning into total melodrama. 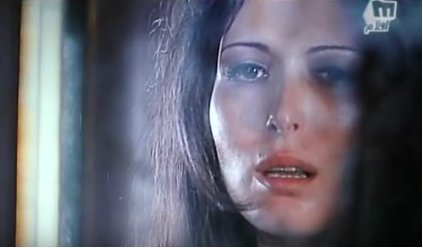 In an iconic scene in which she realizes she is being watched by the security services, Nadia professes that she is “not afraid of death, I am afraid it will come early, before I can see all that I have aspired for,” adding: “The people who have been done wrong… never forget them, never forget them.” Nadia’s career and life represent the doomed utopian vision embodied in the struggle for independence and the creation of a post-colonial nation-state. She, like that struggle, is punished and effectively killed for demanding that its vision — and the promises of the national movement and its leaders — become reality rather than mere rhetoric and propaganda. This vision was crushed by the very state that it inspired, and the culprit here seems to be everyone. 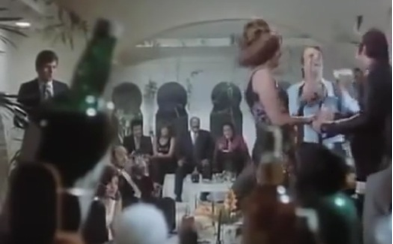 Culpability is central to Said Marzouk’s aptly-named The Guilty. The fact that it was also scripted by Mahfouz confirms the writer’s penchant for constructing stories that implicate many people in a single event — in this case, a murder. This film’s opening death, of a celebrity actor (played by Sohier Ramzy) stabbed multiple times, including in “sensitive parts of her body,” unleashes a torrent of related stories belonging to characters present at her party the night before.

The film, which only saw the light eight years after the 1967 defeat, offers a scathing view of society following the death of Nasser and the post-colonial dream. Marzouk spares no one in his wholesale indictment, from senior bureaucrats to hypocritical housemaids. We get to see the network of “vice” the actor created around her, with vice in quote marks because all the characters are highly stylized versions of villains, self-consciously so. The actor herself manages to escape our immediate judgement despite morally abominable situations only through Ramzy’s bad, naive acting. Because she is always preoccupied by other things (her hair or nails, for example) and engages in most situations in such a such a superficial manner, it’s hard to believe that she is the scheming femme fatale at the center of it all.

But the plot, with its patriarchal moralizing, only sees her instrumentally: as sexual currency with no moral agency. The male protagonists drive the story and ultimately decide her fate. There’s nothing we can condemn about her save the fact that she “whored herself” for personal gain — it is as if all the corruption has to happen through the bodies of women and the libidinal economy that’s in control. The film unpacks the terrible deeds of every character through their relationship to her — only then can we see that her body is the link that connects all this evil. 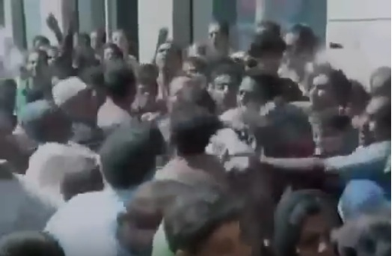 When not depicting women as vessels of male desire and power, Marzouk employs his lens to suggest that corruption has totally permeated the post-defeat society. In one scene, the arrival of frozen chicken at a government cooperative stirs a riot as its manager smuggles a dozen or more chickens out to the actor’s party. This points to a much bigger problem: Anwar Sadat’s reversal of Nasser’s socialist-nationalist model, a model the film seems to associate with the defeat itself. Sadat’s liberalization policies can be seen as the unhappy outcome of 1967 — a reversal hoping to wash out its stain but only succeeding in revealing both the malaise of its own policies and the many paradoxes of Nasser and his state.

These three films nod to Italy’s “film poliziottesco,” developed in the wake of WWII and the fall of the fascist state. Dating back to 1959, this genre specialized in whodunit frame stories implicating several characters in order to understand post-war Italian society and the thwarted hopes of the 1960s generation. Echoes between their frustrations and the deep disappointment felt by the same generation in Egypt after the 1967 defeat are easily discerned. In both instances questions about justice and responsibility were brought to the fore through the violent death of a perceived collective innocence. And in the same way that censorship played a role in controlling the content of films produced in Italy, in Egypt these films were cut, delayed or banned altogether. (Incidentally, Shoukry died the year Dawn Visitor was made and an apparently unsuccessful petition was created for his original cut to be shown.)

The questions raised by these films were never answered and came up again urgently in January 2011 — the revolution was a moment when they could no longer be shelved. Who is responsible? Why were we defeated? Why did the post-colonial dream die? Now, when the history of the past five years in Egypt continues to be heavily politicized by everyone involved, it is useful to reconsider these films and others of their ilk, pose their questions again and critique their views of what was happening in society — for sometimes the biggest act of resistance is remembering. The revolution, after all, tried to say that the only way to transcend the defeat is to create a society that is liveable, just and free.

AD
You Might Have Missed
Mugamma revisited: Reimagining the building and the square
What we talk about when we talk about trees
Carbon Colonies & A Green New Deal
Where do old lesbians go to die?
AD
Ismail Fayed
61 articles on Mada

Topics
Related
cinema
Out on the Street: Playing the ‘good guys’
Andeel | Out on the Street manages to dodge the terrible fate of poor political art that compensates for its lack
History
A reading into the history of Egyptian Jews: Grand narratives and fragile identities
Ismail Fayed | Reading Egyptian Jewish testimonies becomes an attempt to see new horizons for envisioning the future
1952
Propaganda of shattered dreams: Remembering the films of July 23
Rowan El Shimi | This year I asked myself, do these films have much to offer besides their political message?
cinema
Four Egyptian wartime B-movies: Nudity, sex and a dash of politics
Amany Ali Shawky | "Who knows when the war is going to end?" says handsome gay painter Raouf to Ahmed, a youth fresh from