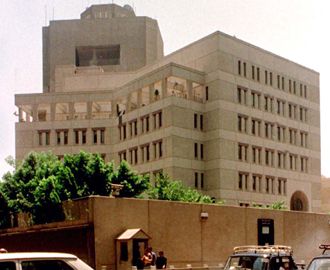 Thousands of emails from Hillary Clinton’s time as United States Secretary of State have been released by the US State Department, with the most recent batch published on New Year’s Eve. In the United States, most attention has focused on communications surrounding the 2012 attack on the US consulate in Benghazi, as well as on political gossip and mishandling of classified information.

The latest batch of emails contains information about the role of the United States in Egypt. The released emails are not yet fully searchable, but here are some of the highlights of the 60-plus documents tagged “Egypt” or “Cairo”.

Remember when a US embassy vehicle was filmed running over protestors on January 28, 2011, and the US said the vehicle had been stolen? They were probably not lying.

Dispatches sent out from the US embassy on January 28 mention that 23 US government vehicles were stolen from the “Polish parking” lot, around 100 meters north of the main embassy building.

An email sent by the embassy on January 29 noted that 18 of the 23 vehicles were accounted for, noting that one armored vehicle was reported to have been involved in an accident in which three to six police officers were killed. Another vehicle was found on the Corniche, and an embassy security officer was chased by a “sword and knife wielding crowd” when trying to recover the vehicle’s diplomatic plates.

A number of emails sent to Clinton from journalist, former political aide and longtime ally Sidney Blumenthal have come to the attention of the US government committee investigating the Benghazi attack.

Blumenthal also passed along some information about the situation in Egypt that he described as coming from “sources with extraordinary access on the ground in Egypt.”

This intelligence clearly needs to be taken with a grain of salt. Senior diplomats reportedly saw Blumenthal’s dispatches as “unreliable”. In reports about Egypt, he makes fairly basic errors like referring to Mohamed Hussein Tantawi, who was then head of the Supreme Council of Armed Forces (SCAF), as “Tatawi”. Blumenthal and his sources were also pretty wrong about the likelihood of the army pushing Mubarak out of office. Nonetheless, they make for interesting reading.

Blumenthal and friends on the Battle of the Camel

In a February 4, 2011 email to Clinton, Blumenthal passed along information he said came from his associate Tyler Drumheller, then serving as a private consultant after a 25-year-long CIA career.

In an apparent reference to the Battle of the Camel on February 2, Blumenthal wrote: “The Mubarak thugs were given a one-time stipend that has run out and unlikely to be replenished. The army did not expect huge crowds to gather in Cairo on Friday. That was a turning point. The army will not push Mubarak out. Talk in the US Senate about cutting aid created some fear in the general staff.”

Blumenthal also shared his personal opinion that the Egyptian authorities should encourage the formation of political parties for a transitional election, in which he foresaw the army pledging to support electoral fairness.

On February 10, Mubarak gave a speech in which he was expected to step down and hand over power to either Vice President Omar Suleiman or the SCAF’s Tantawi. Instead, Mubarak announced that he planned to stay in power until elections could be held in September.

The same day, Blumenthal repeatedly sent Clinton an email with the “latest intelligence” from his sources.

In the email, Blumenthal claimed Mubarak’s speech was delayed as a result of the president’s conflict with the SCAF and insistence that power be handed to Suleiman. According to Blumenthal, military officers including Tantawi and Cairo-area commander Hassan al-Roueini were opposed to power being transferred to Suleiman – a close Mubarak ally who came from the air force and intelligence services – and wanted power devolved to the SCAF.

“Above all, these commanders want to preserve the institution and reputation of the army. They wish to avoid bloodshed and are inclined to lift the state of emergency,” he wrote.

Meanwhile, Chief of Staff Sami Annan was reportedly willing to accept Suleiman, but asserted that “Mubarak should not count on the army firing on demonstrators for any extended period of time.”

According to Blumenthal’s sources, Annan believed that “Mubarak cannot bring himself to say he has given in to pressure.” Annan was also reportedly concerned that if the situation remained volatile, “the army may have to act to move Mubarak out, a step he does not want to have to take.”

“Got it – very useful. Thx,” Clinton responded the following day.

Blumenthal on Mubarak finally stepping down

In a February 11 dispatch, Blumenthal reports on what he’s heard about the negotiations surrounding Mubarak’s handover of power to the SCAF.

The email, entitled “What really happened and what should happen now” is worth reading in full, but highlights include Blumenthal’s claim that the SCAF leaders spent February 10 trying to persuade Mubarak to hand power to them. These discussions were reportedly “heated and revolved around Mubarak’s desire to depart with honor, and a guarantee that any new government would not seek seize his possessions and personal funds.”

Blumenthal’s sources also said Annan “assured Mubarak that King Abdullah of Saudi Arabia would guarantee that he would have a significant personal fortune, even if foreign banks attempted to freeze his personal accounts.”

Based on the information he received, Blumenthal predicted SCAF would serve as a transitional government, and would “likely want to retain as much of the ruling National Democratic Party bureaucracy as possible, incorporating elements of the opposition to manage the transition.” He was also confident that the army would be satisfied to maintain its status as the “guarantor of democracy” while staying in the barracks and avoiding direct intervention in politics. “[T]he generals don’t want to run the country, especially after the Mubarak experience,” he concluded.

…and some wild stuff about Libya

In an April 8 dispatch, Blumenthal claimed to have information about Egypt’s involvement in the conflict in Libya from a source with “excellent access” to the military’s ruling body:

“A source with excellent access to the highest levels of the SUPREME COUNCIL OF THE ARMED FORCES (SCAF) states that the Egyptian Military has turned its full attention to the crisis in Libya. Traditionally, Egypt is a strong influence in the eastern Libyan region of Cyrenaica and is now taking advantage of the current crisis to regain that position. Regardless of whether Muammar Qaddafi remains in power or not, the political division of Libya will give Egypt the opportunity to fill the void in the east. A senior diplomatic source reported that since the early days of the Libyan crisis, the Egyptian government has been quietly supporting Libyan opposition forces through training, weaponry, food, and medical supplies, while attempting to organize a political structure in the east. In addition, Egyptian Special Operations troops are serving with rebel forces in the eastern part of Libya. Senior Egyptian military officers stated privately that these troops are responsible for many of the rebel’s combat successes.”

According to Blumenthal, Egypt had a number of goals in Libya. Among them: avoiding a refugee crisis; ensuring that a new regime would be more open to receiving Egyptian workers; “keeping a close eye on jihadist movements in eastern Libya”; gaining direct or indirect access to Libya’s energy resources; and enhancing Egypt’s regional prestige.

While Blumenthal fed Clinton information allegedly gleaned from backroom dealings, the US embassy in Cairo appeared to rely heavily on media reports, updates from staff in residential compounds around the city, and a network of “opposition contacts” – although unclassified updates forwarded to Clinton from the embassy undoubtedly don’t give a complete picture of US diplomatic strategy and intelligence gathering.

Situation reports sent by the embassy during the uprising make repeated references to conversations with “opposition contacts”, “prominent human rights activists” and “senior activists”, including from Mohamed ElBaradei’s National Association for Change.

By contrast, the emails released do not indicate that the embassy had direct links with the Muslim Brotherhood. A January 29 update references only “contacts with close contact with the Muslim Brotherhood.” Clinton was also forwarded an email from Shadi Hamid, with the subject line “What’s next for the MB?” In the email, originally sent to former US diplomat Martin Indyk, Hamid said he had been meeting with members of the Brotherhood, and their message was “under no circumstances do we want to govern.” Hamid added that the group was “better understood as a religious movement rather than a political party.”

Once in power, Morsi hoped the US would intervene with the IMF on Egypt’s behalf

A rather dull 2013 email from Robert Hormats, US undersecretary for economic growth, wouldn’t feature on a list of the most interesting documents released in December, except for the fact that the Egyptian media seems to have fixated on it as evidence of Clinton’s support for President Mohammed Morsi and the Muslim Brotherhood. This email also happened to be at the top of the list of documents released on December 31, and had the subject line “Egypt” – which is presumably how the local newspapers found it.

The email came at a time when Morsi’s government was seeking a US$4.8 billion loan from the International Monetary Fund. In essence, Hormats reports that during meetings with American officials, Morsi’s representatives were vague about the reform plans Egypt would present to the IMF, but asked the United States to pressure the Fund “to complete a deal in the near future.”

Hormats says he told his Egyptian counterparts the United States has never gotten involved in details of IMF negotiations, but agreed to call the IMF and pass along his assessment of how urgent the situation was. Hormats then explains that he later called the IMF and spoke with Masood Ahmed, head of Middle East unit at the IMF, who “shares the sense of urgency as well.”

In a gripping conclusion, Hormats informed Clinton that the IMF is waiting on a reform package from Cairo and will then send a team to begin negotiations.

AD
You Might Have Missed
Carbon Colonies & A Green New Deal
Mugamma revisited: Reimagining the building and the square
What we talk about when we talk about trees
Where do old lesbians go to die?
AD
Isabel Esterman
99 articles on Mada