On December 10, the Ministry of Foreign Affairs issued a statement in celebration of International Human Rights Day, emphasizing the importance of this day for Egypt. The ministry noted that Egypt’s efforts to protect rights and freedoms is not a recent matter etc.

I would like to tell Egypt and its Foreign Ministry a story, not about the hundreds of detainees in the notorious maximum security Al-Aqrab Prison, who have had to deal with the cold without any blankets, winter clothing or medication, but about one particular child who is dying in the most horrible and gruesome way as a result of prison — despite his release.

I would like to tell the story of Muhannad Ihab, the Alexandrian child who was arrested twice. The first time was from December 27, 2013, to April 2, 2014, for protesting against the regime. Since he was only 17 years old at that time, he was sent to the juvenile correctional facility in Kom al-Dikka, Alexandria, where minors are detained. The following is a message, which he reportedly wrote about his torture there:

“Yesterday, Thursday February 3, 2013, I was beaten, degraded and humiliated. It was bedtime and I hadn’t slept yet. When the officer came and found me awake, he grabbed me and told me to go and stand outside. He kept cursing at me, my family and my mother, using words that wouldn’t even be said to a criminal prisoner. Then he told me to lie on my stomach and put my hands behind my back. He made me crawl on my stomach back and forth, and kept hitting me on the back and cursing my mom. The feeling of being on the ground, lying flat on your stomach and crawling is so humiliating. I felt like setting myself on fire.”

This is how minors are being treated in what the authorities call a “correctional” facility.

Muhannad was sentenced to 5 years in prison, which was reduced after an appeal to 3 months, after which he was released.

After his release, he gave his testimony to the Al-Shihab Center for Human Rights about the torture he was subjected to at police headquarters in Alexandria, and which took place upon his arrest before being sent to the juvenile “correctional” facility.

“During the time of my detention … I faced torture and violations by the police force, starting with our detention in the fourth floor in the police headquarters in Alexandria. National Security officers, who used electric shocks, supervised the investigations. They have techniques where they can severely beat detainees without leaving physical marks, and we were blindfolded. They detained me with 30 other young men in a room so small that we could not breathe. We took shifts in order to sleep given the limited space,” said Muhannad.

What is really poignant is that he was not even arrested while protesting that time. He was on his way to meet his friend Fady, near Montazah, to go to a café together. While he did occasionally participate during that period in demonstrations organized by young members of the Muslim Brotherhood, the problem this time was apparently a bag he was carrying, which made an officer suspicious and had him and his friend arrested.

The second — and “deadly” — period of detention started on 21 January, 2015. Since he had turned 18, Muhannad was transferred in March 2015 to Borg al-Arab Prison following his detention in police headquarters. Borg al-Arab is among prisons with the highest record of human rights violations in Egypt. This time, Muhannad was on his way to join the protest, and was arrested nearby before arriving at it.

After my own release from prison, Muhannad told me his story when I asked him to write about his condition. He had told me, and many of his friends, about what he faced in the juvenile facility, but I preferred to quote his published message and testimony. The following is part of our conversation on Facebook, given that Muhannad is currently in the US for treatment.

“In May, the vomiting and nose bleeds started. I couldn’t talk or hold anything, and I couldn’t use the bathroom on my own. I went to the prison’s hospital where they told me I was anemic, after that they said it was typhoid, and later they said it was hepatitis and sent me to the fever hospital. They failed to diagnose my condition, and whenever I tried to have my blood tested in prison they refused. This was until my father managed to take a sample [of my blood by himself while I was in prison] and sent it to a laboratory [to be tested]. They said it was leukemia. I stayed there [in prison] for a while before getting transferred to Miry [Hospital]. I lost 25 kg in one month. They have tried so many times to send me back to prison and stop my treatment.”

It is worth stating here that no political prisoner at Borg al-Arab Prison may be transferred to a hospital unless the prisoner is dying or suffering from a serious medical condition, like in Muhannad’s case. What’s worse is that even if there are continuous complaints and media attention regarding a specific case, authorities would take so long to transfer the prisoner to one Alexandria’s most wretched hospitals, Miry Hospital, that it would be too late for doctors to examine them. They would then return again to prison, and so on, to no avail. I know two similar cases which I follow-up closely with the families: Adel Abdel Karim and Youssef Shaaban. This inhumane treatment in prisons and detention centers happens despite unwavering statements by officials that everything is completely OK. Assistant Minister of Interior for Public Relations Major Abu Bakr Abdel Karim responded to me in Al-Masry Al-Youm by confirming that Shaaban had been sent to hospital. What he did not mention, though, was that it is a pointless procedure, for he arrives too late each time. He also failed to mention that Adel Abdel Karim is dying of coronary thrombosis, and he never arrived at Miry Hospital on time for proper treatment, for four times in a row.

Additionally, the prison does not approve running tests in its hospital. When a family offers to bring an ice box with a syringe and a tube for drawing samples to take to the nearest laboratory after their visit, the officers refuse to allow the equipment in. I do not know how Muhannad’s blood sample was taken because I was not able contact his family. But in many other cases, the families manage to sneak in a syringe and a test tube, and they have to plan carefully to succeed in drawing a sample in the crowded visitation room without the officers noticing it.

There is a case I followed after my release where the prisoner was bleeding heavily yet the administration rigidly refused to do tests. Eventually, the family managed to draw a sample secretly. When I offered to report the case in newspapers, the family refused, fearing for the safety of their imprisoned son if they found out that a sample was taken. They preferred to continue smuggling medication until he recovers, for his condition was not serious.

More stories about how both healthy and ill prisoners are treated can be found in the first and second part of an article published in Al-Masry Al-Youm entitled “Why do prisoners die in Egypt?”

Going back to Muhannad’s story, prison authorities continued the obstruction of his treatment. As he lost a lot of weight and the bleeding was aggravated, his family started spreading the news and filing several official complaints. On June 11, Muhannad’s friend Marawan posted this tweet: “Muhannad Ihab is a prisoner in Borg al-Arab. Muhannad is very sick. He threw up in court and passed out, he was sent to prison hospital. Prison would not allow him access to medication.”

Shortly after on June 28, Muhannad was transferred to Miry Hospital.

I asked him about the cause of his disease, how it was related to prison, and what his doctor said about it. He answered in all honesty:

“In Egypt, [the doctor] said he didn’t know. In the US, [the doctor] said it’s something in my genes. That means I already had the disease but it was dormant. [In Egypt], they took too long before diagnosing me, which aggravated my condition, in addition to [prison conditions]: malnutrition, rusty [unclean] water, etc. These are not the cause of the disease, they just made it worse. The percentage of cancer in my blood reached 93 percent in prison … people with 5 percent are diagnosed with cancer and should receive chemotherapy; in my case it had to reach 93 percent [before I received any medical attention at all].” 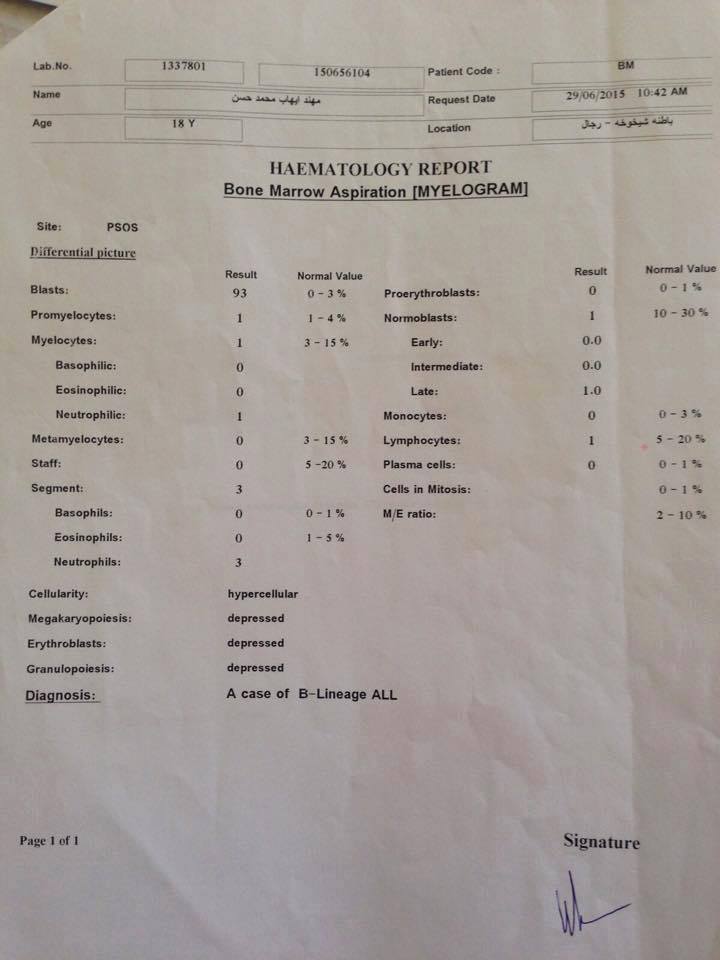 This test took place on June 29, following the first test conducted at Miry after his transfer. Muhannad used to receive chemotherapy while handcuffed, in a dismal public hospital. As his condition continued to deteriorate, and after several official complaints were made, he was released in late July while still facing charges. He flew to the US to recieve humane medical treatment. He is still facing charges in the case. In May and June he received no treatment, and in July he was only allowed treatment at Miry. 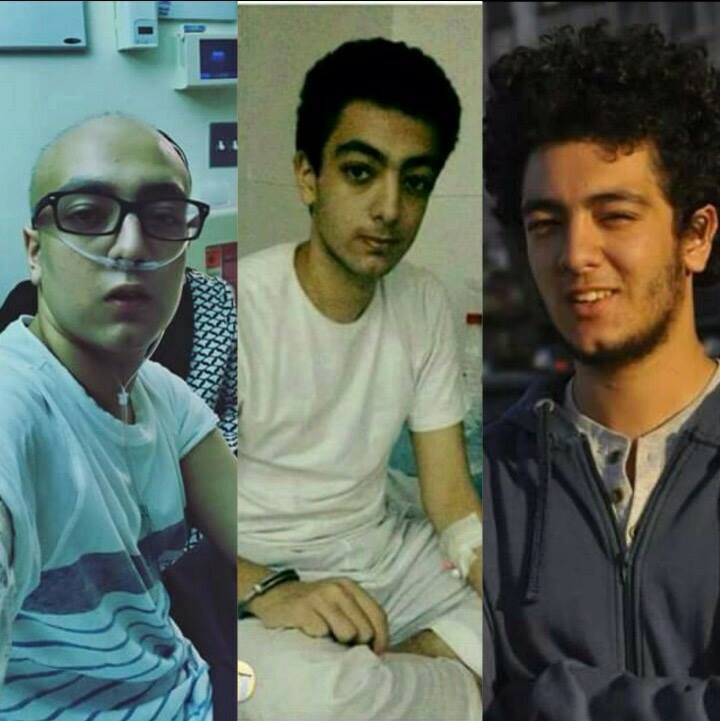 Muhannad’s photos show how much he has been suffering, not because of prison, but because of the inhumane treatment in prison.

I have never met Muhannad, but when he quoted his doctor honestly, I felt a newfound respect for him. He could have claimed that prison was the cause of his disease, he could have taken advantage of his condition, and he would have gained a lot of publicity. If you search online you won’t find him talking about his illness to any news outlets.

“I am grateful to God despite the hard times. I stopped the chemo, not because I am cured or anything, but because it’s useless, a hopeless case … There will be one final attempt, but they expect it to fail anyway, after that I’ll stay at home … Stay in the fight till the final round.”

I am not going to write about how brave that kid is, as he stands in the face of death, illness, injustice, prison and Miry Hospital, all by himself.  I am afraid we are going to lose him, and I hope with all my heart that he could keep standing strong. Maybe all we can do is to send him encouragement, love and prayer through his Facebook account.

How many kids like him, from families that cannot afford treatment in the US, are dying in prison slowly, painfully, and horribly, whether on political or criminal charges? The prisons’ administrations do not provide a laboratory in the hospital, refuse to transfer patients to an external hospital unless they are almost dying, and then they would be sent to the most horrific of all hospitals.

All this reminded me of Islam Hassanein, the 19-year-old boy from the countryside, who was arrested as he was leaving an institution which happens to be located close to a demonstration. Hassanein had nothing whatsoever to do with demonstrations, and I was reminded me of his outcry: “Egypt, how could you do this to me?”

My heart goes out to you, Muhannad, even though it won’t help much.

AD
You Might Have Missed
Mugamma revisited: Reimagining the building and the square
What we talk about when we talk about trees
Where do old lesbians go to die?
Carbon Colonies & A Green New Deal
AD
Omar Hazeq
2 articles on Mada