اقرأها بالعربية
Saudi’s decision to up Egypt investments by 30%: Economics or politics?

On December 16, Saudi Arabia committed to increasing its investments in Egypt to around US$8 billion (30 billion Saudi riyals). Little additional information has been released, leaving experts to speculate on the rationale for the agreement, and how exactly the promised investments will be delivered.

“The decision is political,” say both Amr Adly, political economy expert at the Carnegie Institute for the Middle East, and Moataz Salama, director of the Gulf research unit at the Ahram Center for Political and Strategic Studies.

Saudi Arabia’s current investments in Egypt amount to approximately US$6.144 billion, according to information received by Mada Masr from the General Authority for Investment and Free Zones (GAFI).

Adly sees Saudi Arabia’s move to dramatically increase its investments in Egypt as linked to Egypt’s inclusion in the Saudi-led “Islamic military alliance” against terrorism.

“There is almost no rationale for such a decision at the present time, and thus it cannot be explained except from a geopolitical perspective,” he says. “It is true that Saudi Arabia still has huge foreign currency reserves, amounting to around US$600 billion … But it is clear that in the medium term, if oil prices continue to decline at the current rate, it will begin to face problems due to the gradual erosion of reserves accumulated during years of high prices,” he says.

Even before oil prices hit their current low, institutions like the International Monetary Fund (IMF) warned that low oil prices, coupled with instability in the region, would contribute to a slowdown in Saudi Arabia’s economic growth in 2015 and 2016.

At a time when the IMF is recommending fiscal consolidation, rapidly increasing investments in Egypt to US$8 billion would mark a substantial departure from Saudi Arabia’s relatively modest investments in recent years 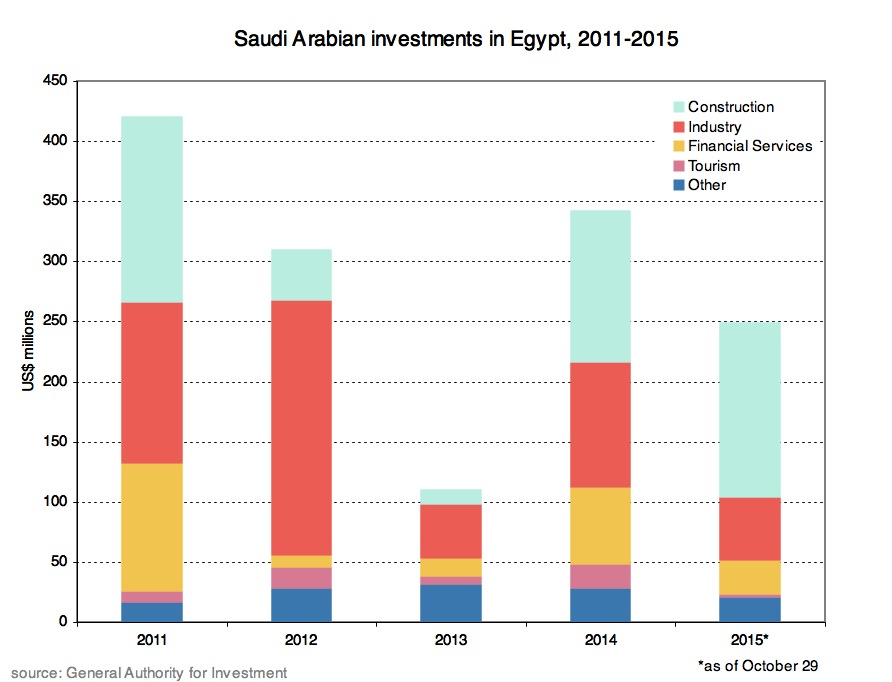 “On the other hand, it does not seem that the almost US$2 billion Saudi investments in Egypt is a very costly enterprise for Saudi Arabia, although it will constitute a 30 percent increase in current investments,” Adly says. “In the notable absence of any details about the Saudi promise, is not clear when the increase will be in effect. But if we assume that it will take place within a year, it would seem unrealistic to the extent that it cannot be interpreted except in a political context.”

Moataz Salama agrees that Saudi Arabia’ promise to increase investments in Egypt is primarily in the service of foreign rather than economic policy, but denies that it is connected to Egypt’s inclusion in Saudi Arabia’s Islamic military alliance.

“Until now there is no evidence to support this, considering the lack of clarity about the role Egypt will play in that alliance. There is also no clear evidence that such a military alliance could be established so quickly, keeping in mind that a similar alliance between Gulf Cooperation Council states has failed to materialize for decades,” Salama says, noting that the announcement of the alliance came within 72 hours of consultations about it. “It is clear that Saudi Arabia took a hurried decision because of Western pressures and the accusations toward a number of Islamic states of supporting terrorism or standing with its hands tied in the face of its expansion.”

“Saudi Arabia aims to consolidate its relations with Egypt as well as show that its relation to Egypt has not been harmed after the succession of King Salman following the departure of King Abdallah Ben Abdelaziz,” Salama adds.

Anwar Ashki, chairperson of the Jeddah-based Middle East Center for Strategic and Legal Studies, tells Mada Masr the agreement between Egypt and Saudi Arabia came in exchange for “Egypt improving the investment climate and protection of foreign investments.” The agreement aims “to make Egypt’s enemies understand that Saudi Arabia is supporting Egypt,” he adds.

Ashki also stresses that there is no correlation between the investments and Egypt joining the alliance. The alliance benefits Egypt because it supports its fight against terrorism, he argues.

“Despite the connection between the Saudi private sector and the government – a matter to a great extent related to the interlinked family relations between big businessmen and the royal family – the language of King Salman bin Abdul Aziz’s pledge [according to the Saudi news agency] implies that the Saudi government will be in charge of the investments, perhaps through a sovereign fund,” Adly says.

Ahmed Sabry Darwish, head of the Saudi-Egyptian Businessmen Association, tells Mada Masr that the initial agreement stipulates that the Saudi government will provide funding to private companies to make the investments.

Ashki says it is not yet clear whether the Saudi government will make investments though government bodies or through agreements with the private sector, but predicts they will probably come via private sector, facilitated and protected by the state.

Saudi officials have not cleared up the question of why, or how, investments will be made. Osama al-Naqli, spokesperson of the Saudi Foreign Ministry, declined to answer questions from Mada Masr about whether the decision to increase Saudi investments in Egypt was driven by economics or politics, whether the Kingdom was planning to channel those investments through state bodies or through the private sector, or whether it was even possible to make such a “generous” commitment in the name of the private sector.

AD
You Might Have Missed
What we talk about when we talk about trees
Where do old lesbians go to die?
Carbon Colonies & A Green New Deal
Mugamma revisited: Reimagining the building and the square
AD
Beesan Kassab
45 articles on Mada