اقرأها بالعربية
Seminar: On the interior life of language 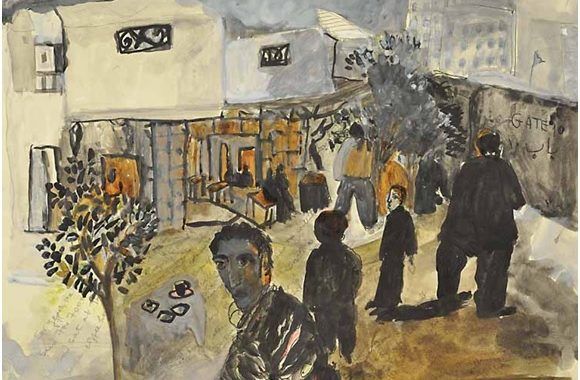 This seminar asks whether writing and language, like authors, are subject to economic forces and transformations to their subjectivity and psychology.

Does the interior of writing — its language, narrative and sense of self — fragment, multiply, have identity crises, take on a number of different jobs to support itself, identify itself as a different kind of character in different times, and feel the pressures that come with such changes? Is the act of writing and the language that composes it subject to forces of circulation and value like all other objects and bodies? Does it cut itself up into several fields, audiences, voices to get work? And does that process begin to define its voice and sense of self?

The stories that condition our present are born out of the stories that conditioned our past. How do we understand the psychological, cognitive and emotional transformations that have taken place collectively, that have not been written in history books, but have accumulated in language, in colloquial stories, in cracks and corners of literature, film and art, to form us? It is necessary to understand what the collective past that we share but do not know by name is. It can only be known by talking with peers, and discovering the constructions of their imaginary, fictional and interior life. This is also why we look at their art, which says something about the life of the times we are in and came before us.

Language is not pure, independent immaterial thing. Language changes with the times we are in — it breaks with traditions and returns to them according to political shifts, wars, battles or alliances. Formal experiments occur due to factors such as ideology, economy, politics, the fracturing or recomposing of collective psychologies, forgotten histories and new histories written over them, changing technologies, and how and to whom we write. New economies and kinds of circulation change the nature and being of language — they transform its body and rhythm. In Arabic this is especially the case because a writer juggles different traditions, between aural and written, colloquial and classical.

Writer and writing are inextricably tied to each other. The writer tells language what it should be and then language tells the writer what it is. Each has a power over the other, carving out a narrative that binds them, if only for a while. They are two subjects in tandem, non-identical twins, egging each other on, each forming the “body” of the other.

This seminar sees writing — novels, short stories, poems — as a looking glass onto a collective subjectivity as it transforms over time. Language forms and narrative experimentation give us a glimpse of the interior (the absurd, truer) life of a collective subjectivity. Writers writing over the past 30 years discuss this with us from the perspective of their practice, and the temporal and situational context that (in)formed it (politically, economically, psychologically).

Writers often say that a story or a novel discovers what it is in the act of writing. It speaks itself between jobs, between cities and towns, sometimes it shoulders its way in through cacophonies and crowds, sometimes it whispers itself to its author alone at night while exhausted, delirious and falling asleep. A story’s language is its body, and it writes itself through its author. We speak to authors, publishers and economic historians to explore how the body of writing transforms, flows, fragments and recomposes, migrates in and out of different fields and forms and speaks itself.

Co-hosted by Mada Masr, the seminar will be moderated by Tarek Ghanem, the new commissioning editor of AUC Press and director of Meta-LinguaL, an Arabic-English translation company with an interest in cultural production. The core discussion will take place in Arabic.

The seminar is part of an ongoing research project on alternative historical narratives and interior, psychic worlds conducted by Malak Helmy in collaboration with Waleed Musharraf, Tarek Ghanem, and an Arabic literature reading group. This research is supported by a grant from Mophradat – Young Arab Theatre Fund.

AD
You Might Have Missed
Where do old lesbians go to die?
Carbon Colonies & A Green New Deal
What we talk about when we talk about trees
Mugamma revisited: Reimagining the building and the square
AD
Malak Helmy
2 articles on Mada

Topics
Related
Abdel Hadi al-Gazzar
Avant-garde art between Egypt and the Soviet Union: Visual comparisons
Sarah Fayed | On the Soviet avant-garde that attempted to put forward new ideas through art before and during Stalin’s
American University in Cairo
Malak Helmy at AUC: Back to the academy
Lina Attalah | Malak Helmy’s show adds a new beam to the inquisitiveness that surrounded AUC’s move to the desert
Alexandria
Women of Karantina: An outrageous novel for outrageous times
Andeel | There is an implied admission of a sick, hysterical relationship between authors and readers living in