On Tuesday I saw Ahmed Shawky’s Al-Garima (The Crime, 2015) — it was the film’s premiere — and Omar El Zohairy’s Zafir (Breathe Out, 2011). I got the impression that both struggle with a similar set of questions, though in different ways.

Shawky’s 8-minute The Crime starts with a female voice that announces, in the way news presenters speak, a crime that’s taken place. Soon after, we meet a Mr. Hussein, in what appears to be a Cairo coffee shop. Speaking directly to the camera, he mourns the death of John Lennon in barely comprehensible English, describing how his heart aches. Sitting right next to him is a younger man who gives him harsh sidelong glances every now and then. He does not seem to care about Lennon’s death.

The screen is divided in two for most of the film. An opposition is built up between the spectator and the character on screen, and between the two men. The younger man is silent as Mr. Hussein moves from English speech into Arabic song. The young man remains on the left side of the screen and Mr. Hussein on the right.

With the theatrical frontality of the characters facing the camera directly, the fourth wall is constantly broken. The images are flat and without depth. There’s an absurdist undertone, especially with the English babbling which continues for nearly all the first half and then the singing that takes over. It’s hard to make sense of what’s going on and what the characters are trying to communicate.

I was particularly taken by the choice to make the two men face us the way news presenters, especially on Egyptian TV channels, typically addressed “the nation.” In comparison to those official voices, the two men of The Crime are not saying anything comprehensible or authoritative. The only news-presenter voice is disembodied and comes briefly at the start. Her announcement remains an influence, but she never appears on screen.

The Crime plays with the expectations that arise when two people are framed in a medium shot, sitting next to each other and facing the camera directly. In one scene we even find them in a recording studio. The authoritative media function of the image is part of the philosophical questions raised by The Crime. It deconstructs the political and social functions of the (digital) moving image as it circulates in contemporary society. When Marshall McLuhan argued in 1964 that “the medium is the message,” he was inviting us to analyze the formal aspects of media. Television’s technology and potential for disembodied images of power (presenters, presidents) influences its content.

In The Crime, the medium deconstructed is video and by extension television. Shawky’s experimentations seem aimed at defamiliarizing the workings of TV, especially as tool of mass media, as disseminator of news and formal announcements by the state.

While Shawky has an art-world background, Zohairy studied at the Higher Cinema Institute in Cairo. Breathe Out, his first film, won a special mention in the Dubai IFF Arab shorts competition, while his second, The Aftermath of the Inauguration of the Public Toilet at Kilometer 375, was selected by Cannes Film Festival’s Cinéfondation in 2014.

Breathe Out is concerned with the moving image as it figures in Egypt’s film history, questioning some of the gaps in the repertoire. More specifically, it explores aging and how aging changes one’s relationship to the environment, and its camera’s gaze is that of an old man. As the voices and experiences of the elderly have not figured prominently in Egyptian cinema, in a sense, Breathe Out extends the Egyptian cinematic canon. 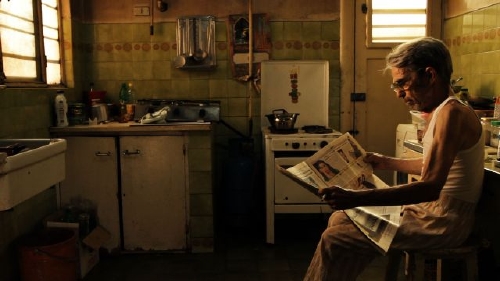 The film’s play with time in relation to the moving image is masterful. As the camera enters the living space of an elderly couple, it seems to slows to their temporality. It is often static and it keeps a distance, observing as life unfolds. Breathe Out is 20 minutes and 5 seconds long. It has no dialogue and is completely silent at times. Often, however, we get an ambient noise that is rich in its ambiguity and rawness. Zohairy’s choices in terms of camera movement, sound, and acting performance all give the feel of a documentary, but Breathe Out is a fiction film.

Cameras, in the way they look and what they see, can create a certain consciousness in the spectator. The cinematic gaze can alter our awareness and what we filter out from experience. I think both Shawky and Zohairy are interested in this. Zohairy focuses more on temporality as a point of access to depict a certain consciousness, while Shawky’s handling of expectations allows him to intervene in our relationship with moving images.

Perhaps an overarching philosophical question animating these two experimental (digital) films is: What is the relationship between image and the “reality” it attempts to represent? With Shawky, that reality is seen from a psychological angle, and in Zohairy the connection between image and reality is affective, sensory. Much like Mark Lotfy’s Do As You Said (2012), The Crime and Breathe Out question the ontology of the image — what it is capable of saying, doing and making.

Since this year’s Cairo International Film Festival, I’ve had the sense that many Egyptian and Arab filmmakers are currently questioning the relation between image (representation) and “reality.” People have said we’re entering a new neorealism in Egyptian cinema, that Latin America’s primarily literary tradition of magic realism is infiltrating the Arab cinematic language, or that we’re going back to the idea of cinema as fantastical held by early French filmmaker and illusionist Georges Melies.

Within the context of an experimental film and video festival, we should debate these questions. Films like The Crime, Breathe Out and Do As You Said are experimental in a broad sense as films that intervene in some way with the local body of images circulating in Egyptian society. Context is important for understanding why these works are “experimental.” All the three films are philosophical works that invite the spectator to think.

If you’re interested in another approach to questioning the ontology of the image now, in what we can call the Arab world, make sure to go see Raymond Gemayel’s I see you as a photograph (2015) and Adel Abidin’s Three Love Stories (2010), which are both showing on loop at Medrar throughout the duration of the Cairo Video Festival. For a larger inquiry into the status of the image as it turns digital, check out Firas Shehadeh’s Unidentified (2014) and Mohamed Nour’s Catalepsy (2015), both on loop at the Contemporary Image Collective.

AD
You Might Have Missed
Where do old lesbians go to die?
What we talk about when we talk about trees
Carbon Colonies & A Green New Deal
Mugamma revisited: Reimagining the building and the square
AD
Nour El Safoury
34 articles on Mada

Topics
Related
7th CVF FestBeat
FestBeat: Mark Lotfy’s Do As You Said at the Cairo Video Festival
Nour El Safoury | Words become performative utterances that mold the space and, in the way they are spoken, their tone
book reviews
Hanan al-Cinema: Caring critique of an Arab filmmaking rebirth
Nour El Safoury | If you’re fascinated by the possibility of a critique that cares about its object, not the rampaging
cinema
Everything’s banal: Mohammad Shawky Hassan’s new short hits home
Laura Bird | Quiet, largely static images from everyday life are paired with audio clips from Egyptian news, prime-time