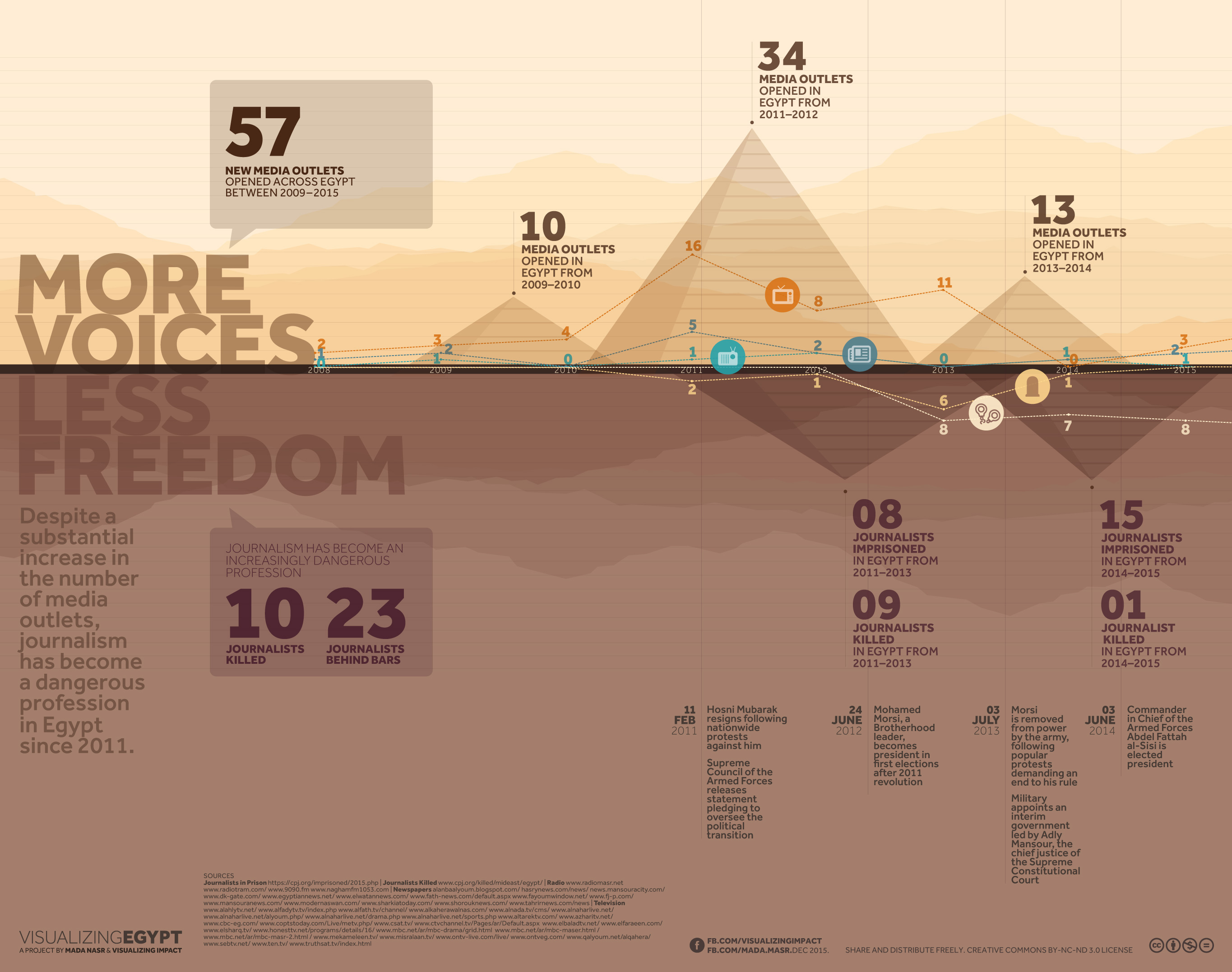 Since the early 2000s, Egypt has seen the liberalization of the media market, with the state opening up media ownership to private players. A host of privately owned newspapers and TV stations emerged and broke the state monopoly over Egypt’s media, introducing audiences to different journalistic practices and narratives.

Meanwhile, a variety of restrictions emerged in the form of legislation, arbitrary arrests, controversial trials, closures and blackouts. In the last two years, this crackdown has intensified within a broader context of a skewed political space. State-engineered control, self-censorship and alignment with the ruling regime have become common traits of media organizations, including those that are privately owned and which were once a diverging voice from state media.

This visual is the second in a series of visuals produced by Visualizing Impact and Mada Masr. The first, “Shadowed Signals: The Practice of Censorship,” published in May 2015, illustrated how media censorship is practiced through both formal and informal channels.

In this visual, we highlight increased activity in the media landscape since 2009, as manifested through the establishment of different outlets. We then pointed to the increasingly restricted environment, as shown in the killing and arbitrary imprisonment of journalists.

Today, 23 journalists linger in prison, according to the Committee to Protect Journalists, with higher estimates from local human rights organizations. While the authorities released two Al Jazeera journalists following a presidential pardon, other lesser-known cases remain incarcerated, some with sentences and others pending trial. For those killed while covering events, there has been no accountability.

Using a timeline, we show how the diversification of media ownership and the resulting voices in the past few years have not translated into a free media environment, with state control permeating media practices across the board.

Mada Masr is a two-year-old media organization, producing in-depth content about Egypt in Arabic and English. It was born with the aim to create a fully independent and sustainable media model and, while pursuing this goal, it constantly examines and questions the media ecosystem in which it is functioning.

Visualizing Egypt is a collaboration between Visualizing Impact and Mada Masr, where the former’s expertise in concept-driven designs and artistic direction and the latter’s local knowledge and conceptual edge bring together seminal narratives on crucial issues.