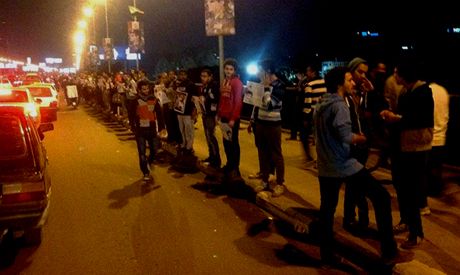 Abdeen Misdemeanor Court sentenced five people to two years in prison on Sunday for participating in a silent protest on the fourth anniversary of the Mohamed Mahmoud clashes without a permit, the state-owned Al-Ahram newspaper reported.

The defendants, three men and two women, were arrested on November 19, 2015, on the October 6 Bridge while holding signs calling for the release of political detainees and the prosecution of those responsible for the deaths of protesters.

They were convicted of protesting without a permit, illegal assembly, obstructing traffic in Mohamed Mahmoud and Mohamed Farid streets and disrupting public peace. Another nine arrested during the same protest await trial in a second case with similar charges.

The silent stand was held to commemorate the Mohamed Mahmoud clashes that broke out between protesters and security forces in 2011 and led to over 50 deaths in five days.

The government passed a law in November 2013 rendering unauthorized protests illegal. The new legislation has since been used to crack down on public demonstrations and activists.

This has made the commemoration of revolutionary events difficult in recent years. Security forces were heavily present in Tahrir Square on November 19 in anticipation of any political movement.