A Worthy Degenerate, a marker of this moment’s caution

The “poor image”: the rascal of the visual world, disintegrating as it reproduces, swarming through servers, surfacing on the smallest cheapest screens in ever more degraded forms.

Hito Steyerl’s landmark essay In Defense of the Poor Image discusses the kind of images that have proliferated since the advance of the internet, rampant file sharing and low-grade digital technologies: mobile phone footage, flashing porn gifs, DVD rips, thumbnails, copies of copies. We think of these media as cheap and lacking compared to purposeful, resolution-rich “serious” art and entertainment media such as 35mm film and HD video. Steyerl’s essay reframes the poor image in terms of its place in a class hierarchy of images, emphasizing that its mobility, “lodged in a circulatory system of desire and exchange,” is more important than its permanence or quality.

Exhibitions based on essays run the risk of tying up artworks in the service of theory, draining them of their own lives. This would have been ironic in the case of this exhibition, given that Steyerl’s essay explores an untethering of the poor image from the serious obligations of its high-quality original. Curator Sara El Adl has handled this by developing the exhibition more on the basis of a question, in response to Steyerl’s assertion that the poor image needs defending. As the exhibition handout goes: “But … hasn’t it taken up its place in media, film and artistic production? Doesn’t it also live in galleries and museum spaces alongside the 35mm stunners?”

And in modest terms, the exhibition goes on to make that argument, exploring how lo-fi, glitched, over-shared, lossy images — through the buzzwordy realm of “post-internet art” — are now as much part of the artist’s toolkit as any more classical medium. A breezy example here was Yusef Bashat’s deceptively inconsequential piece Dead Babies (2013), cut entirely from excerpts of camera footage too blurred for use in his “proper” films: the bits you cut out of your Instagram post. The work feels easy, but go with it. Glaze over and enter its whirlpool of discarded movement. It’s surprisingly hypnotic.

In mood, the exhibition leans heavily towards the “poor” image’s sense of abjection, and is paradoxically quite meditative, especially in Townhouse’s newly opened-up, gloriously musty extra rooms. Only a few mirrorball tiles scattered in a corner of Ikon Chiba’s mixed media video installation hint that we might be missing out on the trashy fun side of the poor image. (Imagine — not a single cat gif!)

Projected in one large hall, Walid ElSawi’s curious stop-motion animation, Do-Mystic Uni-Verse (2012), is of rotating kitsch ornaments, fruit, plates, wedges of sponge, all accompanied by short subtitled statements like “Every time I ask my pet about how he sees me, he looks into my eyes and whines.” Who this person talking is, we don’t know, but they seem like a strangely pathetic figure, concerned with speech impediments, cages, the quality of their masturbation and the care of their joints. Aside from the coincidence of its low-quality video, there’s no literal connection to the poor image, but the work easily contributes to a possible personification of it.

Also running on a crummy-broken vibe is Sarah Samy’s glitch video work from 2010 — retro chunky pixellated colored lines and shapes clotting and streaming across a small video screen, occasionally getting it together to look like the 8-bit video game it probably is made out of. This broken game was presented on a screen and transformer stripped of their casing, as if just pulled off the landfill — the much-coveted toys of childhood now unintentionally generating abstraction for the richer visual world that followed.

Steyerl’s essay holds far more than a description of an aesthetic, however, and the strongest achievement of the exhibition is judiciously picking up on the political threads of the essay in precise relation to some of Egypt’s realities. Steyerl asserts that the poor image does not just evidence changes in media technology but also reflects the “the post-socialist and postcolonial restructuring of nation-states, their cultures, and their archives.” That is, visual media archives in countries with Egypt’s kind of history tend to be held by the ex-colonizer (think the Description de l’Egypte, which for some time was only accessible to foreign scholars), or scattered and neglected through multiple reorganizations of state heritage. In these moments of rupture, the poor image takes on an even stronger class reality: for example, in the avalanche of amateur footage taken by people desperate to document the happenings of 2011 and onwards.

From here, the image experiences its nadir of “privilege”: atomized, multiple, extremely low quality, unedited, barely coherent yet terribly urgent; and, in the case of Jasmina Metwaly’s piece, inadmissible in a court of law. Evidence of Absence (2015) is simply the seven hours and fifteen minutes of mobile-phone footage made by a factory worker who filmed his workplace as a means to produce evidence that a state-owned factory was being dismantled and sold for private gain. To allow the viewer to know more about what’s going on, a full translated transcript is on offer.

Deprived of legal status, the unanswered question here is what sort of existence the footage gains in an art gallery. Legal evidence “works” only when admitted to the theater of law, and it is beside the point to expect the footage to suddenly take on aesthetic or some other edifying attribute just because it entered an art gallery. This documentation work is exhaustive, exhausting and has reached the end of its usefulness even as a poor image, because the poor image maintains its vitality through mobility. Not waiting to be seen, as conventionally exhibited artworks do, but streaking past as many eyeballs as possible as it transits digital space. Perhaps the most effective part of including this material here is how it gives rise to the beginnings of an unbearable analogy between the status of the poor image and that of the poor themselves.

Another, less immediately politicized comparison between personhood and image is made in Malak Helmy’s work, Notes from the Carbon Coast (2010). Helmy has been developing a series based loosely around upper-class leisure developments on Egypt’s north coast. These picture-perfect, sprinkly-lawned, trouser-pressed gated communities are sold in reaction to what we might euphemistically call Egypt’s excess of reality. Unsurprisingly, these places have been accused of being fake, unsustainable copies lifted from a Gulf fantasy; but unlike the poor image, these copies have a horror of degradation. In the measured tones of her voiceover, Helmy alludes to this by talking about people who “made digital copies of ourselves,” desiring to self-replicate like minerals until they “become diamonds.” Starting from an image of a hexagonal public bench, Helmy overlays screen-grabbed textbook diagrams of hexagonal carbon molecules and architectural ground plans, as though the people buying up the holiday compounds of the North Coast are as much self-replicating images or impressions as the capitalist utopias they buy themselves into. 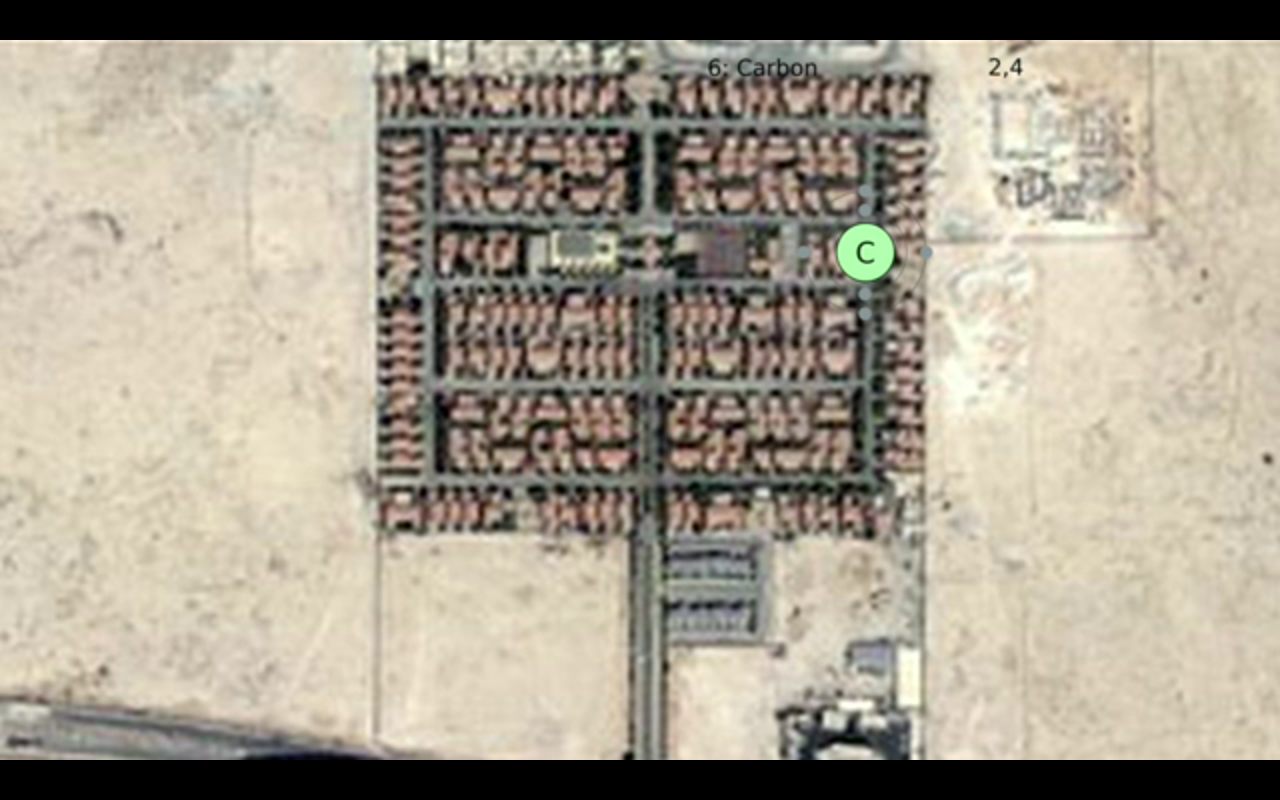 It is, to be honest, a bit of a trek down the garden path from the poor image, a topic so immense and (literally) undisciplined that attempting to encapsulate it through the comparatively static form of an exhibition would probably kill it. Instead, A Worthy Degenerate is selective, modest and exploratory, letting the artwork nudge its way into the theory rather than vice versa. What could have stepped up, though, were the mediating materials. There was a lack of Arabic translation throughout, and the handout also sacrificed clarity for poetry, which is hard on the reader when you’re dealing in theoretical essays. What emerges (at least for this native-English-speaking recovered theoryphobe) is a very particular, somber and rather thoughtful exhibition, one step removed from its raucous and dynamic subject.

Where does this sobriety come from? I can’t help but speculate that a similarly inspired exhibition three or four years ago would have been wilder, sillier, more embarrassing and hubristic, drawing shamelessly from protest material – and being the killjoy that I am I probably would have written an awful review of it. In its own measured and quiet way, the unfolding of A Worthy Degenerate is a particular marker of the caution of this moment.

A Worthy Degenerate is on show at Townhouse, 10 Nabrawy Street, downtown Cairo, through January 12.

AD
You Might Have Missed
Mugamma revisited: Reimagining the building and the square
Carbon Colonies & A Green New Deal
Where do old lesbians go to die?
What we talk about when we talk about trees
AD
Mia Jankowicz
12 articles on Mada

Topics
Related
Ayman Ramadan
The knife-sharpener’s wheel: A review of Ayman Ramadan’s Mere Real Things at Townhouse West
Mia Jankowicz | While we may well have to adapt to the expectations of private supporters, we must decide which compromises
Ahmed Badry
Doing nothing
Sarah Rifky | #WAYDO marks an interesting moment of collaboration between two types of institution and it stages a
animation
Do-Mystic Uni-Verse
Doa Aly | I'm squatting on the floor in the middle of Nile Sunset Annex, watching Walid ElSawi's stop-motion animation
exhibition reviews
On passion, pillars and punishment
Mohammed Abdallah | Malak Helmy’s latest body of work, The Passions of the Trash Drive: A Group Exhibition, was beautiful