FestBeat: The value of an uncertain gaze at Panorama (day 7)
By
Nour El Safoury 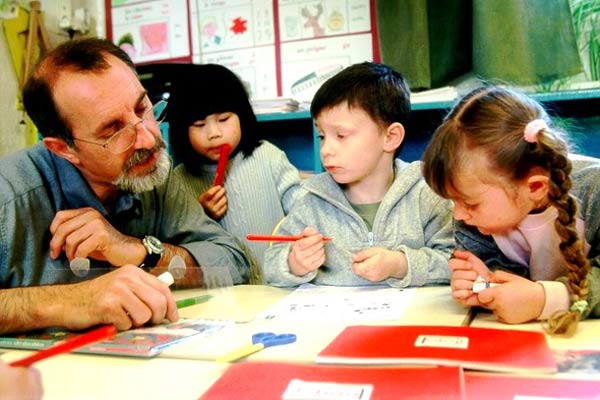 He is a man over 60 years old now, his hair all white, bald in parts, his frame somewhat frail, but he is still a vision of towering greatness to me. Nicholas Philibert appeared yesterday at Zawya after the screening of the documentary film Etre et Avoir (To Be and To Have, 2002). He wore a blue shirt and black pants. He stood with his hands in his front pockets.

I came relatively late to Philibert. The first time I watched a film by him was in my first year in college. Our instructor started her lecture after the screening with something as catchy as “let’s talk about the uncertainty of his way of looking.” She was an Austrian with a very interesting French accent in English and a knack for following every statement with “you know.” She was one of my favorite teachers.

The film we had just watched in class was in fact also Etre et Avoir, one of Philibert’s most popular documentaries. In it, the camera’s way of looking is quite distinct. It affirms nothing and denies nothing. It leaves you in a state of uncertainty. Each moment present on screen is pregnant with possibilities: anything could come next. The camera’s way of looking is lovingly curious, searching but wary.

Etre et Avoir opens with cows being herded across a road, mooing and bells clanging. We hear people worry about weather and traffic. Then we see the school bus making its way quickly through narrow, snowy roads in French countryside. Danger lurks everywhere. When we first enter the classroom, there isn’t a soul. The camera finds only two pet turtles moving slowly. The contrast between their movements and that of the zipping school bus creates a tension that’s sustained throughout the film. There is a dangerous outside and a peaceful inside, but the hardships of farm life on the other side of the windows slowly enter the calm classroom.

Etre et Avoir takes us into a rural school where 5 to 11-year-olds sit together in one room with one teacher, Monsieur Lopez. It is a special environment where it seems everyone, especially a young girl called Natalie, struggles to communicate. The camera communicates through its way of looking — not an ethical gaze (very popular in documentaries) or a voyeuristic gaze (popular in Hollywood movies), but a questioning gaze that withholds all answers in favor of a renewed sensitivity to the world. Objects familiar from our everyday life, like scissors and pencils, are seen anew in Philibert’s films. Etre et Avoir is an invitation to see the world again, but differently. In a sense it is really an invitation to “see” again.

During the discussion yesterday, Philibert said he makes “just films.” He is not interested in a message or a political statement about pedagogy or the changes taking place in agricultural economy. For him, cinema is about a particular way of communicating, of looking. He has long been fascinated by how we communicate. Entering a classroom like that of Monsieur Lopez is an exploration of how a nation instills its principles and language in its children, how a man about to retire finds the energy to talk to nursery children and angry 11-year-olds, and how 11-year-olds find the words to talk to each other and their younger classmates.

I start to notice a man putting his hands in his pockets as he stands in front of an audience attempting to communicate, gaits and mannerisms, or the accent of a teacher who is passionately inviting her students to think. A caring look, one that shows us our vulnerability as human beings attempting to connect with one another in a dangerous world, is a look that lingers with you and has great political repercussions.

Philibert will make another appearance after the 6.45 pm screening of his latest film, an acclaimed account of 24 hours in the life of public service broadcaster Radio France, called La maison de le radio (2013), at the French Institute in Mounira. He is a special guest at Panorama this year and a few of his documentary films screen in various venues in the coming days. Etre et Avoir screens again at 10.30 am on December 5 in Cinema Karim. Topics
Related
8th Panorama FestBeat
FestBeat: What counts as a documentary film? (day 6)
Nour El Safoury | Queen of Silence is a creative non-fiction film. It freely uses the storytelling tools of fiction film,
8th Panorama FestBeat
FestBeat: Storytelling vs. the state at Panorama (day 5)
Nour El Safoury | Queens of Syria is a phenomenal film that is very much worth experiencing.
Education Ministry
Education interrupted
Tom Rollins | Syrians in Egypt “live like any Egyptian citizen” with access to housing, healthcare and education,