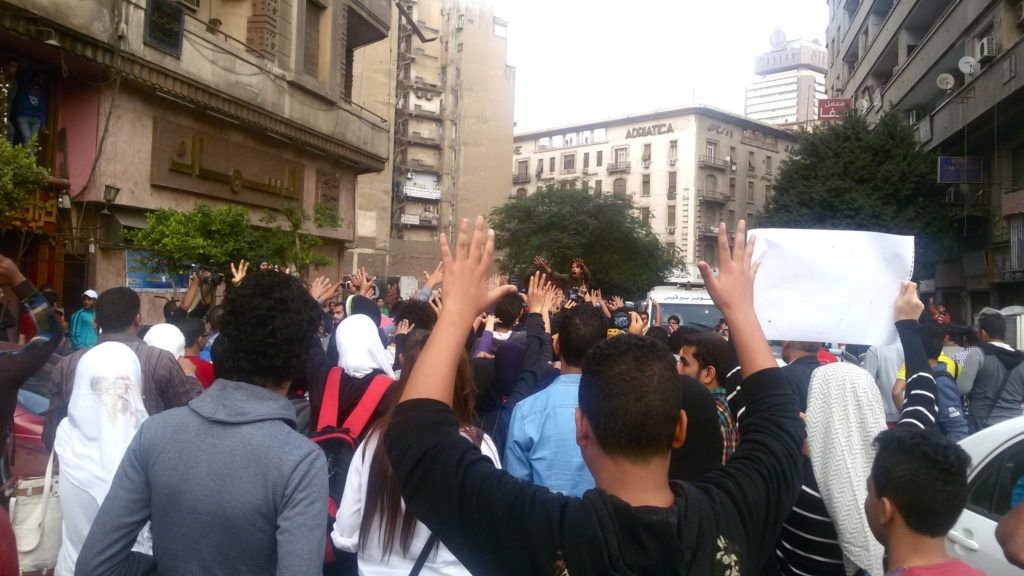 Prosecutors refused to release 13 protesters detained Thursday during the fourth anniversary of Mohamed Mahmoud, despite a judicial order for their release on Sunday.

The 13 protesters were arrested during a peaceful rally on November 19 to commemorate the anniversary of the Mohamed Mahmoud Street clashes with police in 2011.

The demonstration was held on a sidewalk along the Sixth of October Bridge, involving around 100 young activists.

Nine of the 13 who were detained are still in custody at the Qasr al-Nil Police Station near downtown Cairo. Another four are being held at Abdeen Police Station.

Prosecutors charged the detainees with protesting without permission, taking part in an illegal assembly and obstructing traffic, according to the Reuters-affiliated Aswat Masriya.

A judicial order was given for the release of the nine detainees on LE10,000 bail each, but prosecutors appealed the order.

The prisoner-rights group, Freedom For The Brave, posted an update on their page saying the nine defendants are due to be transferred to the South Cairo Court, in the district of Zeinhom, for a hearing on Monday.

The advocacy group also posted a photo of the detained activists, lined-up and handcuffed while awaiting interrogation by prosecutors.

Freedom For the Brave, along with the privately owned Al-Tahrir, Al-Dostour and Al-Bedaiah newspapers reported that a release order was also raised for the four other activists who were arrested, on bail of LE3,000 each. However, prosecutors also appealed this order and Al-Tahrir reported they are due to be moved to the South Cairo Court with the other nine.

The clashes on Mohamed Mahmoud Street — which leads to the Ministry of Interior from Tahrir Square — erupted on November 19, 2011, when police forces sought to forcefully disperse protests in Tahrir Square.

Clashes between protesters and police lasted for several days and nights, and resulted in the death of over 40 people, while well over 1,000 others were injured, many of whom were shot by the notorious eye sniper.

On the first anniversary of the Mohamed Mahmoud clashes in 2012, further violence erupted, resulting in more deaths and injuries.

Since the June 30 popular uprising in 2013, the government introduced a law prohibiting unauthorized protests, empowering police with sweeping powers to crackdown on unauthorized demonstrations and arrest those attending.