Situations arise because of the weather

After heavy rain and a thunderstorm during the night, the sky couldn’t have been clearer on this Monday morning in Alexandria. Nothing in the sky but sun and a few friendly cirrocumuli, those fluffy clouds that turn everything a degree softer. While the other participants were picked up by a minivan on Saad Zaghloul Square, I was a bit late and expected the tour to have already started. Luckily a bunch of about 10 people were still standing at the entrance of the Antoniades Garden, experiencing an unintended introduction to Mahmoud Khaled’s artistic examination of the city of Alexandria.

Apparently the gate had been open, but then quickly shut when the group came into sight, and secured with a lock. It was said that the garden was closed due to the earlier rain. After some time we faced two men on their vehicle who wanted to leave the garden, them stuck inside, us in front of them, eager to get inside what should be a public space, but which now operates through the capriciousness of the gate keeper. After some negotiating we finally managed to walk through the gate — and immediately we were hit by the very specific smell of green grass, flowers and trees that only appears when it rains. It did not take long until we started pointing out all kinds of insects and little animals, snails and butterflies, like children on an outing after a long winter. Sadly, we were just a few adults living in a city. 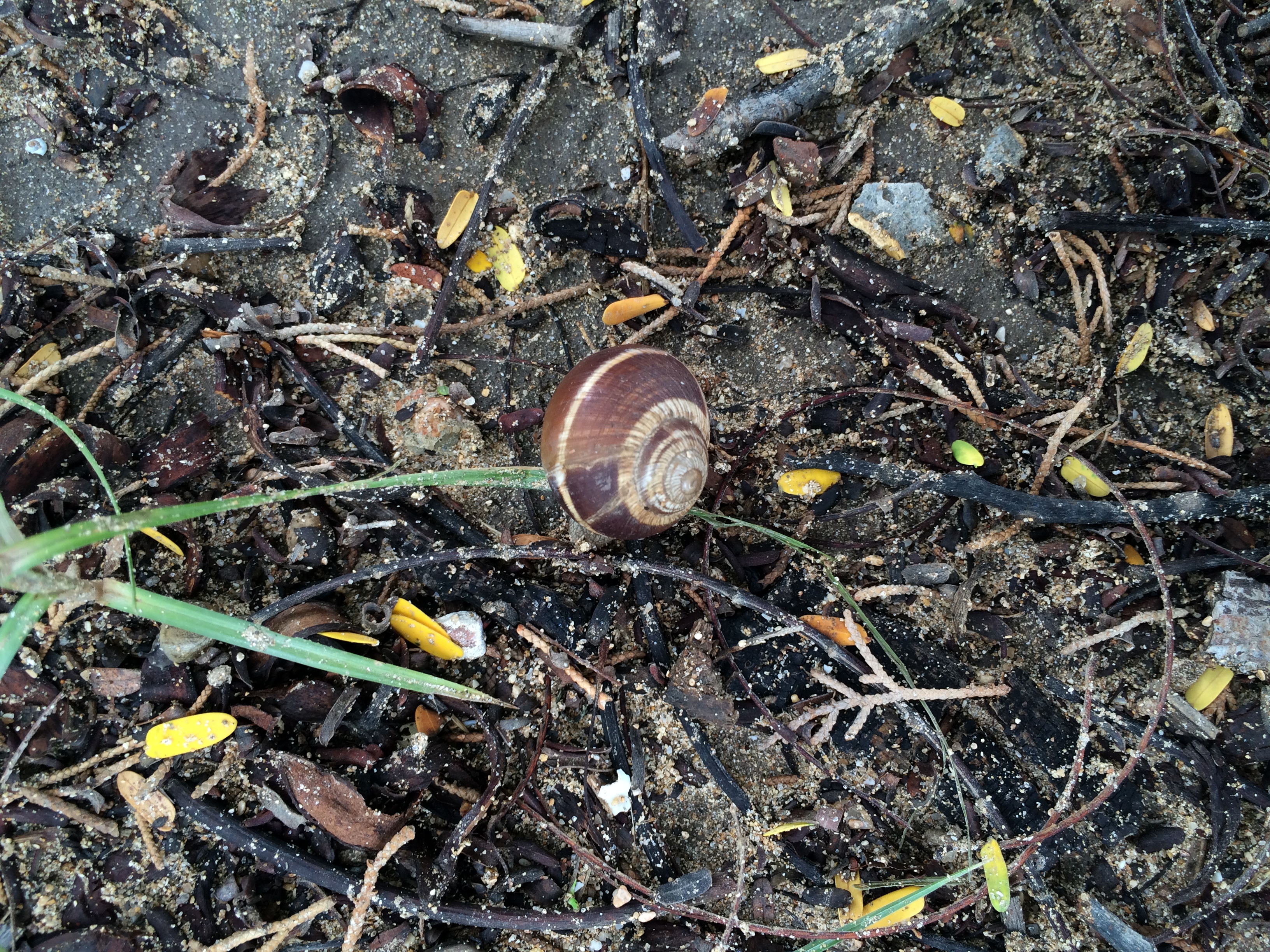 There was an overall feeling of utter contentment due to the ripple of clouds, the sun warming our backs, the jolly insects buzzing around us and the excitement of discovering something new. Khaled led us to a statue in Greek style and explained how fine arts students create their first drawings and paintings here, and how in particular this one statue has created difficulties because it does not seem to have any of the usual prominent markers of gender. All the statues seemed to have come from a rather experimental place, some appearing Disney-like, as Christodoulos Panayiotou rightly pointed out, another one with obviously asymmetrical breasts — rather natural, yet unusual in the form of a classic statue, as an attendee commented. 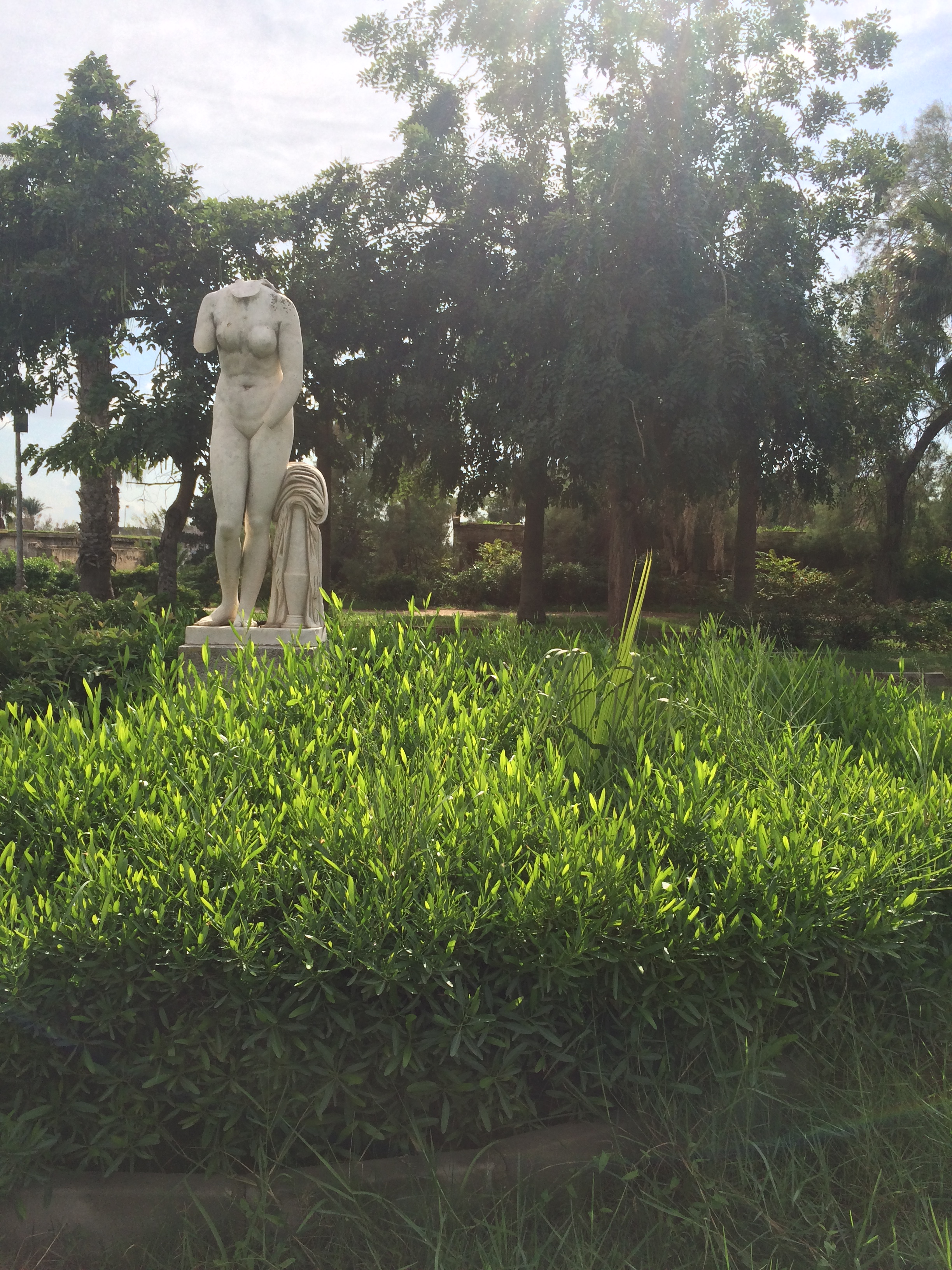 We continued our walk and went down a little slope to find the ruins of what was once a beautiful cultural center, with untrimmed nature slowly taking over. In what appeared more as a footnote, Khaled explained to us that the wall surrounding the garden was taken down during the recent political upheavals, leading to the garden suddenly becoming populated, especially at night, with no possible control of the flow of the human bodies taking advantage of a hidden, private public space. We went around the culture center and approached the Antoniadis Palace which, together with the park, is constructed as a miniature version of the Palace of Versailles. The palace had scaffolding around it because the Bibliotheca Alexandria has commissioned renovation works to turn it into another cultural institution/event hub under their rule. 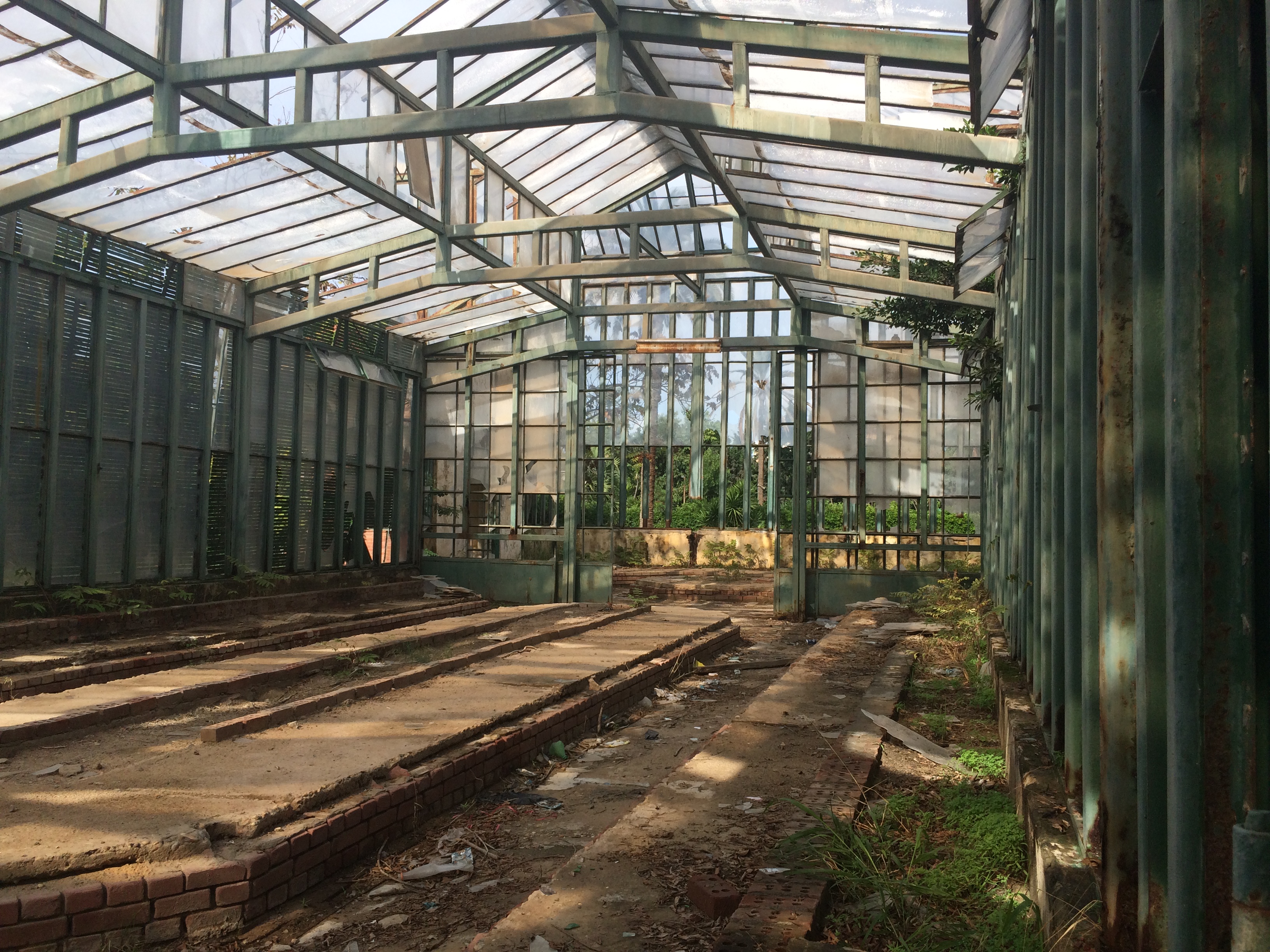 For the first reading (in Arabic and English) we all gathered inside the garden’s old and damaged glass (now perspex) green house, not far from the palace, from which we could let our eye wander around in the park outside while listening to Alaa Khaled, poet and editor of Amkenah, a magazine focused on the poetics of places. Could there have been anyone more suitable for this endeavor, in this place? He read a (true) story set in the 1990s about a man, Gamal al-Dowaly, and his graffiti-like slogans that appeared on the walls of Alexandria, many of them satirizing the state of Egypt in that time: “The homeland goes for how much a meter?” — “The Wholesale Homeland Clearance Sale” — “Gamal al-Dowaly for President of the Republic.”

So smart, bitter and witty to pick up on this link between commerce and country, on the citizen’s conversion into a commodity to be sold and circulated.

He appeared like a phantom, with people not knowing whether or not the name was real, or if it was one person or a group.

Gamal al-Dowaly roamed the city as if in a poem. I pictured him wandering along and then an idea coming to him, and in place of paper, writing on the wall before the thought evaporated. Graffiti carries an implicit sense of protest and resentment: it calls on others to bear witness to your despair, and likewise to your love.

Through repetition, Dowaly became part of the city and its consciousness. He emerged from anonymity when he appeared at an Ittihad basketball match and stripped naked, broadcast live on television. Then he and his slogans slowly disappeared with the years.

We left the green house and walked over to the zoo, which apparently opened in 1907. Most of the cages are empty now, and the zoo’s Facebook page functions more as a memorial site announcing the death of beloved animals, one by one. A museum for captivation, said Mahmoud Khaled. Because they are state-run, zoos are also a manifestation of power, he continued. This one, falling apart yet appearing tidy thanks to the devoted care of the zoo’s employees, does indeed resemble a certain state, with the nostalgic architecture of the cages reminiscent of a different time. 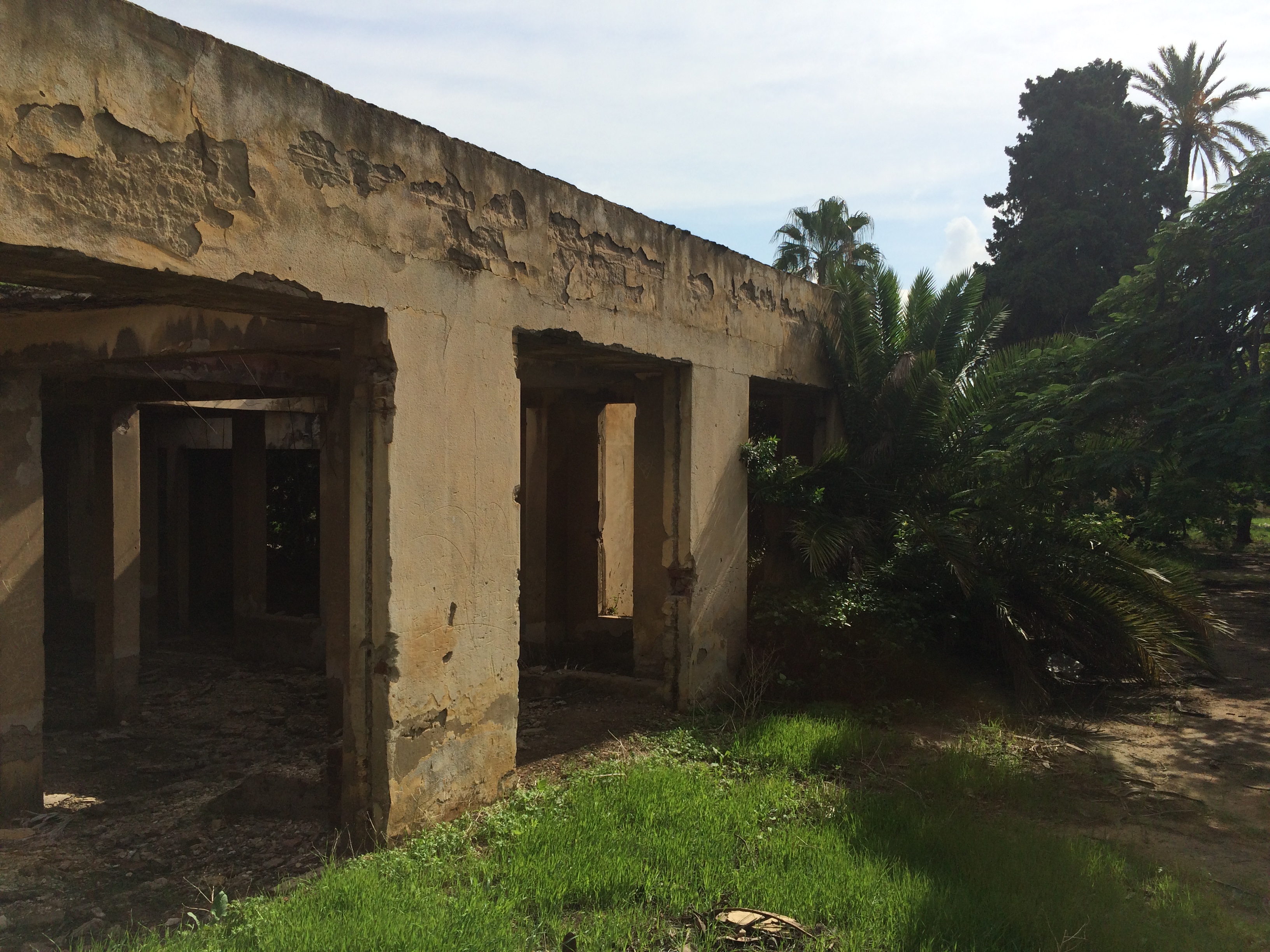 We discussed zoos as expensive, prestigious projects: the animals, the employees and the running costs of food, medical care and so on are exorbitant. So on the one hand, cities and states are proud of well-run, well-functioning “nature-like” zoos and habitats (Germany alone has about 1,000 public animal husbandries of various forms), and on the other hand, there is a trend to abolish zoos, like circuses and SeaWorlds, due to discussions around animal rights and welfare. The Alexandrian municipality could make a smart move and transform the zoo into a small-scale wildlife park with local animals only — which is sort of what it already is, with its blissful cats with shiny fur and healthy bellies promenading between the empty cages, looking at birds and dozing in the sun. The empty cages left us with a relieved feeling. Wandering among the tiny tigers, we made our way to the zoo’s round look-out, which has a beautiful, functioning and likewise round elevator in its core. 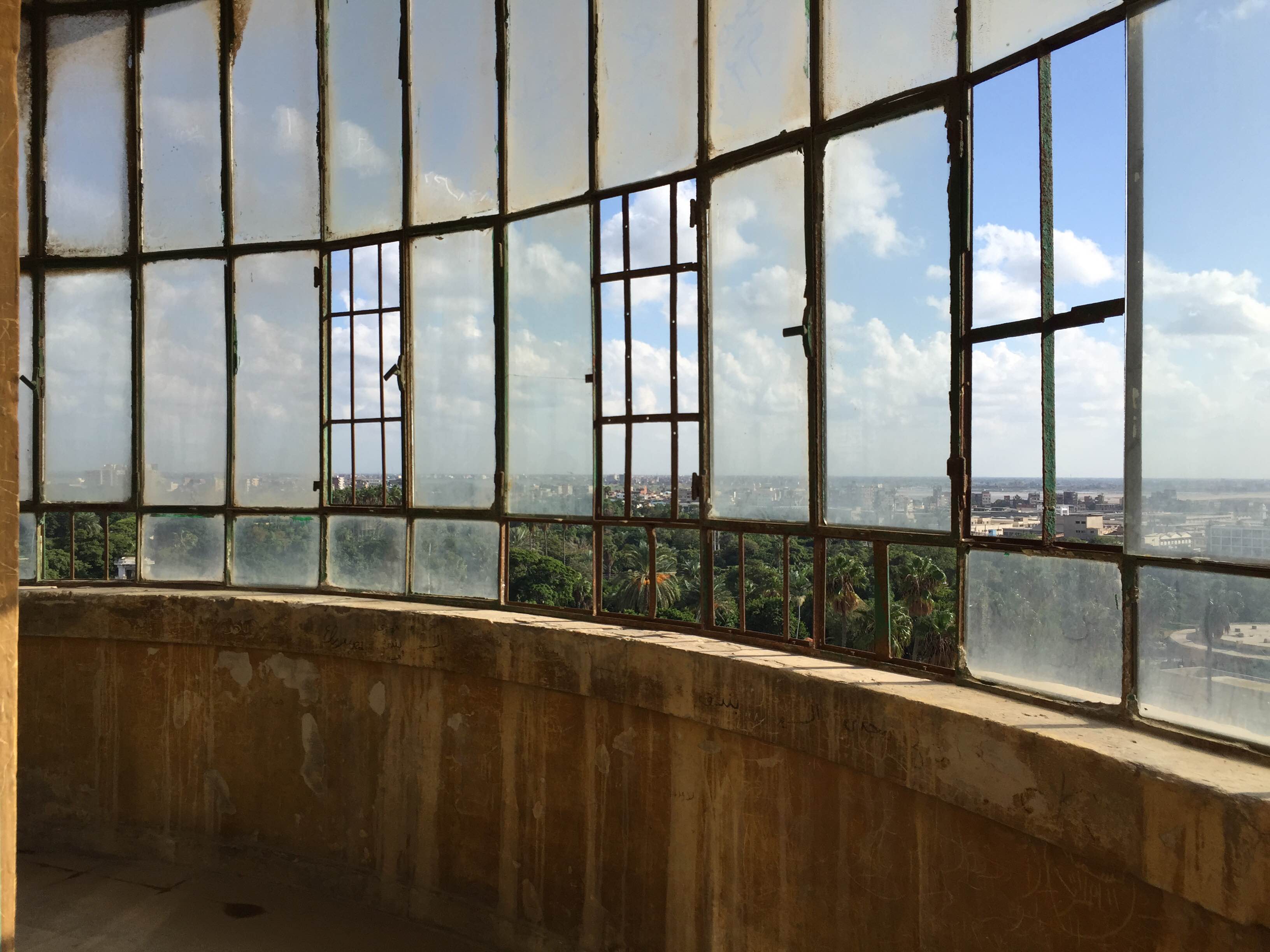 From here we could overlook the zoo and part of the city, and again our gaze explored the surroundings while Magda Magdy introduced the next text, a work by Haruki Murakami on the disappearance of an elephant in a zoo in a Tokyo suburb, called The Elephant Vanishes (1991). The narrator of the story observes the tender and loving relationship between the zoo keeper and the old elephant, and one of the most reverberating moments of the reading was the description of how with time, the difference between the keeper and the animal shrank, becoming intrinsically more balanced — until they disappeared.

The elephant and the keeper were doing what they always did — cleaning, eating, playing around with each other in that friendly way of theirs. It wasn’t what they did that was different. It’s the way they looked. Something about the balance between them. […] In size. Of their bodies. The elephant’s and the keeper’s. The balance seemed to have changed somewhat. I have feeling that to some extent the difference between them had shrunk.

Hearing the short story triggered a lot of thoughts for me. The connection Murakami defines here describes the difference between sympathy and empathy, two important guideposts for how we see and shape the world we live in, including our notion of animal rights. The relationship between a keeper and his or her protégé can have various forms, but sometimes it ends lethally when the latter un- or intentionally kills the former. It is often the case that these animals are then killed to satisfy a feeling of revenge and control, be it a killer whale in a SeaWorld park, a shark in the ocean, a tiger in a circus, an elephant in a zoo or someone’s dog in a village. This seldom leads to a discussion of the root problems: humans intruding in animals’ natural habitat, captivating animals, threatening or torturing them. The outcome is a hypocritical translation of moral values: the animal is being tried and punished, but at the same time animal rights are still a mere joke to many. How can a juridical system be what it promises when the morally and ethically defined law is implemented for one side only, and dignity is neglected? 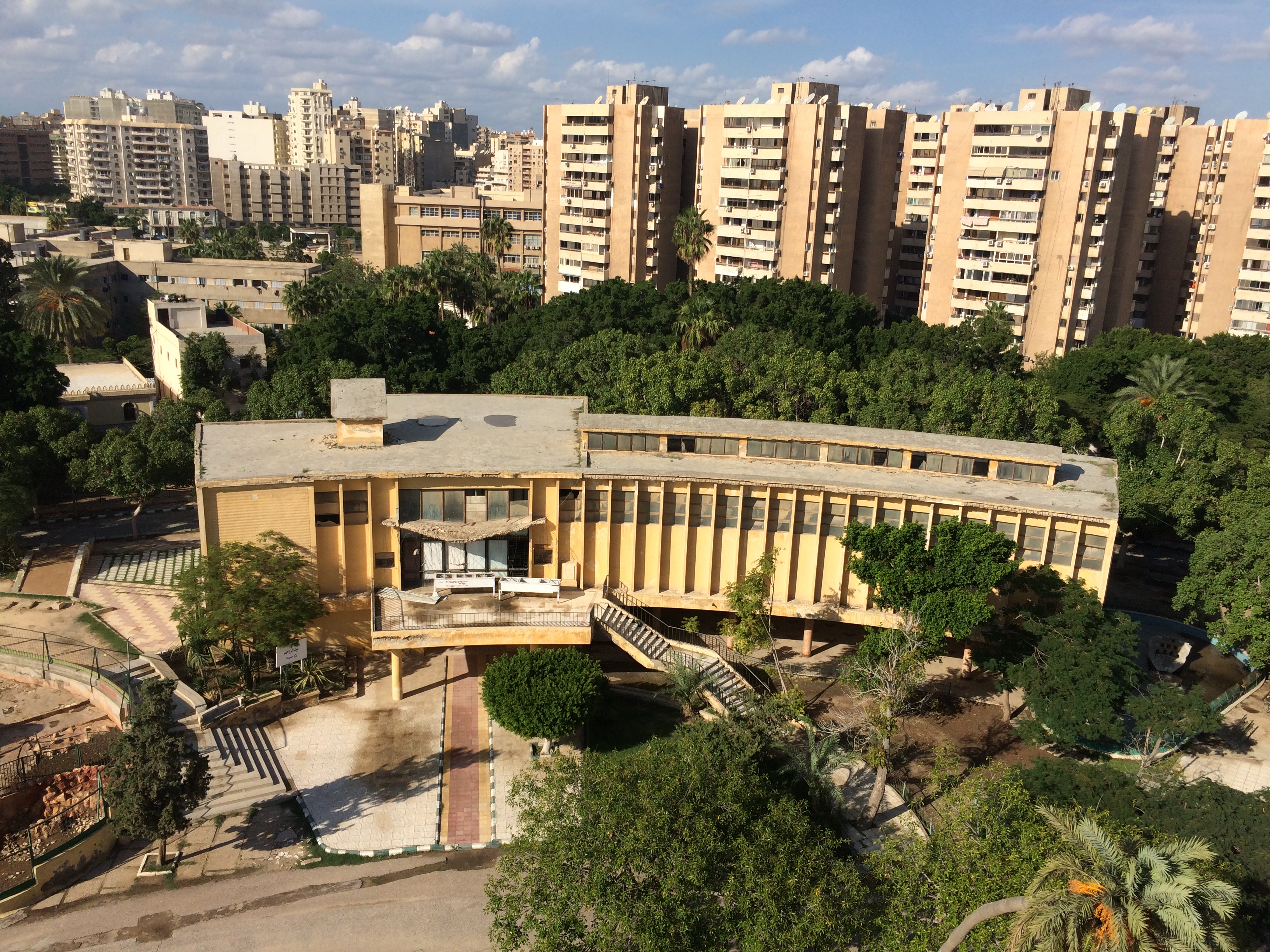 Magdy, who presented the cleverly located and thoroughly fitting text, then made a reference to a case in 2013 where officials from the Cairo Zoo and relevant ministries claimed that a giraffe had committed suicide (apparently she choked herself due to an incorrectly arranged food basket). Animal suicide itself is highly contested, although various forms of self-destruction have been observed. There is a form of autothysis certain animals (ants, termites, pea louse) use to protect others by internally rupturing or exploding, and suicide-inducing parasites force their host to die so they can move on to a new one. But animals can also become severely depressed, for instance, when held in captivity or when the loss of a mate occurs, and sometimes these depressive episodes end in death. Prominent stories of mourning animals relate to dogs losing their owners or zoo animals losing their trainers/keepers and then suffering from a condition that appears similar to the broken heart syndrome experienced by humankind. Egypt’s media coverage of the giraffe’s supposed suicide was absurd, or so Magdy said. The discussion of whether or not an animal can consciously end its life then led to a discussion concerning human prisoners. With the so-called “death in custody,” death is often announced as suicide and stories are amended by state officials in similar ways, covering up a killing with self-inflicted destruction.

This is when the tour ended. Looking out at the sky, the frolicking cirrocumuli still worked their magic. We slowly retrieved our senses and came back to reality after that little display of neuron fireworks, making our way down through the tower and toward the exit of the zoo and the garden. It had been a captivating tour indeed through time and the imaginary, through private and public pasts and presents, thoughtfully composed and conducted — what a treat to see, before decay and neglect makes these places vanish like the elephant and his keeper.

Postponed Dates on a Disappearing Coast, in the context of Christodoulos Panayiotou’s show Two Days After Forever at the Venice Biennale’s Cyprus Pavilion, was led by artist Mahmoud Khaled on November 16-17. This is an account of the first day.

AD
You Might Have Missed
What we talk about when we talk about trees
Mugamma revisited: Reimagining the building and the square
Where do old lesbians go to die?
Carbon Colonies & A Green New Deal
AD
Ilka Eickhof
5 articles on Mada

Topics
Related
Alexandria
Retrospection as an act of regaining a present
Alexandra Stock | On Mahmoud Khaled's tour of Alexandria and its beginnings in a Cyprus Pavilion at Venice.
culture tips
Tips from the culture desk: Music and films for Cairo, psychogeography in Alexandria
Perhaps the most unusual and therefore unmissable cultural event this week is a two-day tour through
Alexandria
Atelier Alexandria: The persistence of the state
Sohier Amin | It seems that a serious generational gap may be threatening this well-preserved ecosystem that has sustained
colonialism
A critical journey: On Mahmoud Khaled’s ‘Painter on a Study Trip’
Ismail Fayed | Is the audience's relationship to fine arts is the same as their relationship to colonial cosmopolitanism?