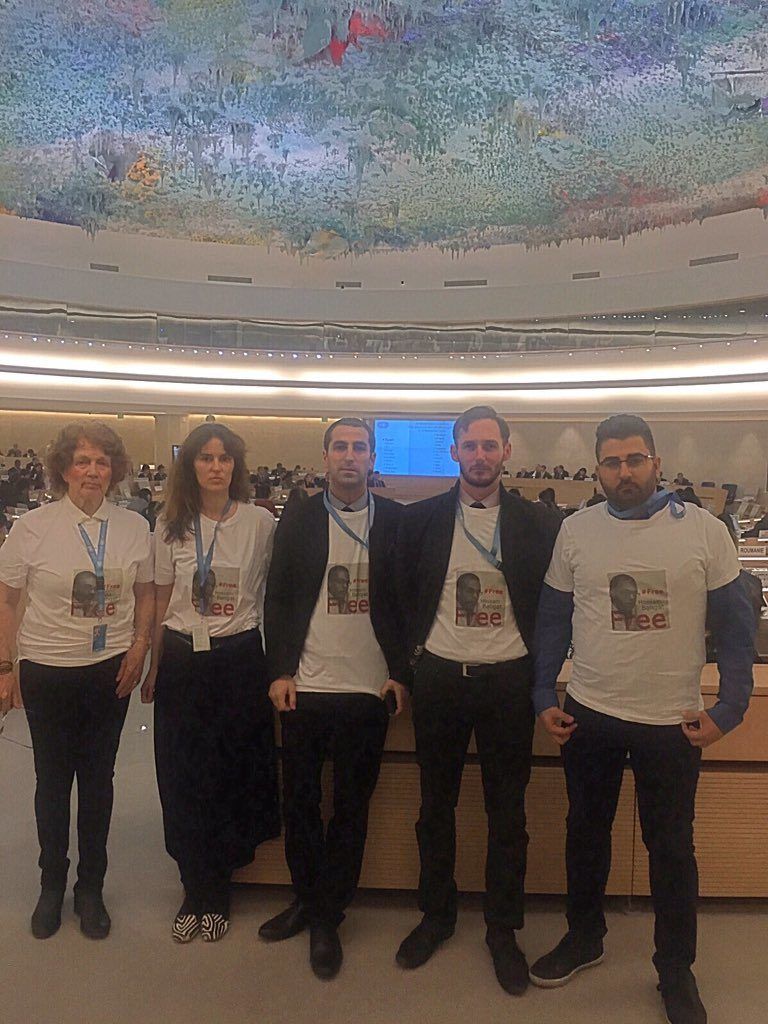 Rights groups in Egypt and abroad have condemned the detention of Mada Masr contributor Hossam Bahgat in a series of statements released after military prosecutors took him into custody Sunday. They declared their solidarity with the imprisoned journalist and called on the Egyptian authorities to release him immediately.

Bahgat has been charged with broadcasting false information that disturbs public security, and is currently being held under a four-day detention order issued by military prosecutors. His current whereabouts remain unknown.

“This is just the latest in a series of detentions of human rights defenders and others that are profoundly worrying,” said Ban’s spokesperson in New York.  “Pluralism and vibrant civil society are key for achieving long-term stability in the country, including the guarantee that all peaceful voices are heard and represented.”

Also on Monday, 16 local NGOs released a statement demanding that the authorities drop all charges against Bahgat, and calling for a moratorium on the sections of the Penal Code that he is charged with violating.

The groups include the Egyptian Initiative for Personal Rights (EIPR) — which Bahgat founded in 2002 and lead as executive director until 2013 — as well as the Hisham Mubarak Law Center, the Cairo Institute for Human Rights Studies, the Habi Center for Environmental Rights and the Egyptian Center for Public Policy Studies.

EIPR has called for a protest in solidarity with Bahgat on Tuesday at 5 pm on the steps of the Journalists Syndicate in downtown Cairo.

The International Network for Economic, Social and Cultural Rights (ESCR-net) also sent Egyptian authorities a letter demanding Bahgat’s immediate and unconditional release. Bahgat serves as chair of the network’s board, having been elected to the post by the coalition’s 220 member organizations.

ESCR-net says it “condemns the arbitrary arrest of Mr. Bahgat and the serious violation of his human rights.” The group adds that “this arrest is reflective of an ongoing practice of harassment, arrest and incarceration of journalists and human rights defenders.”

In a separate statement released Monday, the Arabic Network for Human Rights Information condemned Bahgat’s interrogation and detention as a “serious and alarming violation of freedom of the press as well as the right to information.” The organization said his prosecution at the hands of military authorities violated of Article 204 of the Constitution, which prohibits the trials of civilians before the military court, except for crimes that constitute a direct assault against military facilities or camps of the Armed Forces, or their equivalents.

International groups have also called on the government to free Bahgat and drop charges against him.

“The arrest of Hossam Bahgat today is yet another nail in the coffin for freedom of expression in Egypt. He is being detained and questioned by the military prosecutor for peacefully exercising his right to freedom of expression and must be immediately and unconditionally released. Any charges brought against him must be dropped,” said Philip Luther, director of the Middle East and North Africa Program at Amnesty International, in a Sunday statement.

Sarah Leah Whitson, Middle East director for the New York-based Human Rights Watch, described Bahgat’s detention as a “bellwether moment” for Egypt. “Continuing to hold Hossam Bahgat or putting him on trial would be a definitive signal that President Abdel Fattah al-Sisi and his government have no interest in rolling back the repression of the past two years,” she said in a Monday statement.

“If the government of President Abdel Fattah al-Sisi were interested in protecting and advancing the rights of Egyptians, it would bring in Hossam Bahgat to provide advice, not prosecute him,” Whitson said. “The specter of Bahgat joining thousands of other civilians unlawfully charged in military courts starkly demonstrates how Egyptian authorities under Sisi believe that the only place for critics is behind bars.”

The Observatory for the Protection of Human Rights Defenders — a joint program of the International Federation for Human Rights which represents 178 global NGOs — and the World Organization Against Torture — a coalition of more than 311 global NGOs — also released a statement Monday calling on Egyptian authorities to release Bahgat. “The Observatory expresses its concern regarding the arbitrary detention of Mr. Hossam Bahgat in an unknown location, which seems to aim only at preventing him from exercising his right to freedom of expression,” the group said.

The Committee to Protect Journalists (CPJ) also called for Bahgat’s immediate release. “The Egyptian military has already indicated its contempt for the role of an independent media with a series of arrests of journalists. This latest detention is a clear attempt to stifle reporting,” CPJ Middle East and North Africa Program Coordinator Sherif Mansour said. “The Egyptian authorities should release Hossam Bahgat immediately. The fact that he was questioned for so long without his lawyers present only heightens the outrage.”

Geneva-based human rights workers organized a solidarity stand for Bahgat inside the United Nations Human Rights Council, where a representative of Egypt was scheduled to take the floor today. Individual members of Civicus, the Cairo Institute for Human Rights Studies, the International Federation for Human Rights and the Coalition for Reproductive Rights entered the meeting room wearing shirts calling for Bahgat’s release. They were quickly escorted out and had to surrender their badges, meaning they could not reenter.

Bahgat’s supporters have also organized campaigns online. A Facebook page calling for his release, Free Hossam Bahgat, had more than 5,000 likes as of Monday evening, and the hashtag #FreeHossamBahgat is one of the top Twitter trends in Egypt.

Topics
Related
Egyptian Initiative for Personal Rights
Update: Hossam Bahgat has been released, unclear if charges still pending
Hossam Bahgat was released from military intelligence at midday on Tuesday after he signed a document
Armed Forces
A coup busted?
Hossam Bahgat | A military court convicted 26 military officers with conspiring to overthrow the current regime in collaboration