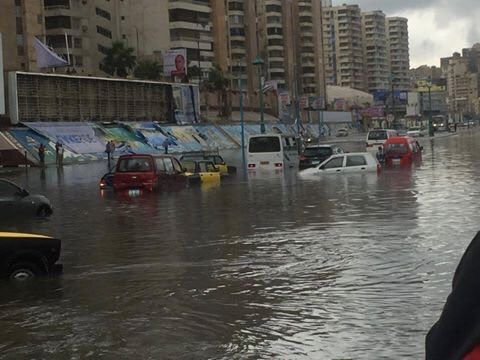 Eleven people died in the northern governorate of Beheira as a result of bad weather and flooding, which also hit Alexandria and Sinai, the Reuters-owned Aswat Masriya reported on Wednesday.

Prime Minister Sherif Ismail is expected to arrive in Beheira later on Wednesday, Aswat Masriya reported. Ismail gave the governors of the troubled areas responsibility for vaccinating state employees and school students if conditions worsen, and instructed them to consider making Thursday a day off if necessary.

A statement by the cabinet declared that the Armed Forces helped rescue 100 people in Afouna village, Beheira, who were trapped due to rising flood waters.

The cabinet urged citizens in Alexandria and Beheira to limit their movements until weather conditions improve.

Flooding began early in the morning, bringing traffic to a standstill. The tram service, which is usually the only functioning means of transport in the city in the case of heavy rains, was also affected by the floods and stopped working.

Failing infrastructure and poor drainage have been widely blamed for last week’s fatalities. Four people were electrocuted when a wire from the Moharram Bek tram fell into the rainwater flooding the streets, while strong winds caused a light tower to fall, killing the fifth victim.

Alexandria’s governor resigned following the deaths and the government admitted to shortcomings in its response to the crisis, asserting that the city’s lack of mechanisms to cope with seasonal heavy rain is now being addressed.

In a press conference last week, Prime Minister Sherif Ismail said the government had allocated LE75 million for the repair of the sewage system in Alexandria, but that the budget wasn’t used in time and the situation changed, causing projects to stall. He promised they would be restarted and completed within two months.