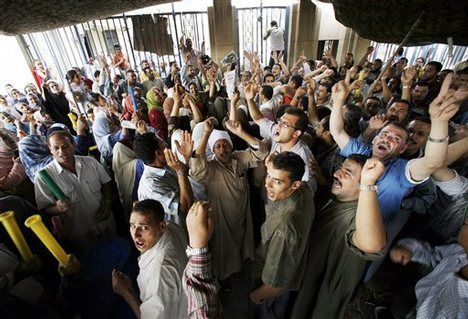 Workers at two of Egypt’s largest textile mills called off their strikes after making a deal with bosses that their overdue bonuses would finally be paid.

But the overdue 10 percent bonuses, which President Abdel Fattah al-Sisi decreed in September would be paid to all Public Works Sector employees, retroactively from July this year, have still not been paid.

Both the Mahalla and Kafr al-Dawwar companies are classified as Public Works Sector companies, and are managed by the Holding Company for Textile Industries, which oversees 32 companies in total.

“We’ve heard reports and rumors that we might get paid as early as Wednesday, but we are expecting to receive our wages with the 10 percent bonus on either the November 7 or 15, as these are our usual paydays,” a Mahalla worker who wished to remain anonymous commented.

“We have every intention of resuming our strike if our wages do not include the 10 percent bonuses,” he added.

Hoda Kamel, an independent union organizer and secretary of the Toward a Just Labor Law campaign commented, “While it would appear that workers have achieved victory with their strikes, their demands have not yet been met and we have yet to see if company administrators are actually going to provide their workers with these bonuses.”

Kamel said it’s likely the strikes will resurface if the bonuses don’t materialize, and that workers in other factories may join if they don’t receive bonuses in line with those at Mahalla and Kafr al-Dawwar.

Reports circulated that workers are protesting in smaller numbers at the Simo Paper Company. Additionally, workers at the Helwan Iron and Steel Company and Tanta Flax and Oils Company (which are both Public Works Sector companies) filed legal complaints against their bosses for not complying with Sisi’s September decree.

“Why is it that workers have to resort to protesting, then striking, just to receive the bonuses that the president himself decreed? Why can’t the government and state officials implement their own decrees? This is an administrative failure on the part of state authorities,” Kamel argued.

Mahalla workers said administrators blamed the Holding Company for Textile Industries for the non-payment of bonuses, while the holding company blamed the Interior Ministry, which was entrusted with regulating the disbursing of the bonuses.

Speaking on the privately owned Al-Hayat television channel on Sunday, Ahmed Mostafa, President of the Holding Company for Textile Industries explained, “The problem pertaining to the disbursement of this bonus was a legal shortcoming and ambiguity, which was corrected.”

Also on Al-Hayat, the president of the General Union of Textile Workers (affiliated with the state-controlled trade union federation), Abdel Fattah Ibrahim, commented: “Immediately after the (Mahalla) strike was called off, we were able to negotiate a decree to disburse the 10 percent bonus. A list of worker’s basic wages and pay scales is being prepared and the bonuses are in the process of being paid immediately.”

Ibrahim said Mahalla’s workers should not have staged a strike, maintaining that negotiations and collective bargaining are the only ways of effecting change, “because Egypt’s economy is still recovering.”

This has been also been the line of the Egyptian Trade Union Federation (ETUF), whose secretary argued it is the patriotic duty of workers to help rebuild the national economy, and to refrain from work stoppages.

The losses incurred from this strike have amounted to almost LE30 million, according to Mostafa, who says the Mahalla company, like many other state-owned textile companies is already deeply indebted and can’t afford to pay its bills. “This is the problem. We need to change the culture of labor strikes. There are many other means of voicing objections,” he said.

However, the Mahalla worker who spoke to Mada Masr anonymously maintains: “If we didn’t strike, we wouldn’t have been paid our bonuses, which the top governmental executive personally decreed.”

He added, “For three days we refused to collect our pay checks, as they did not include the mandated bonus. During these three days, several delegations of workers relayed their demands, and warned of escalations to no avail.”

Workers warn that there is still room for an escalation in strike action, as the strike at Mahalla was only partial, and the company employs a total of 17,000 workers, around 14,000 of whom were reportedly on strike. Around 7,000 workers went on strike at the Kafr al-Dawwar Textile Company.

“There will always be attempts to intimidate workers into calling off their strikes by blaming them for company losses,” Kamel says, “But these workers are calling for the accountability of administrators, whose policies serve to squander company funds and resources.”

Workers at the Misr Spinning and Weaving Company claim that nearly LE2 billion of losses have been incurred over the past decade. As for Kafr al-Dawwar, its administrative president, Ahmed al-Sawy, told media outlets in August that the company’s debts are around LE800 million.

“It is difficult to gauge exactly how much these losses amount to,” Kamel says. “What we do know, is that there are exponentially bigger losses being incurred by administrators, who have mismanaged the company for years and who continue to run this company into the ground.”

Located in the Nile Delta Governorate of Gharbiya, the Misr Spinning and Weaving Company in Mahalla has been at the forefront of labor strikes since December 2006.

A strike that was thwarted by police forces in Mahalla on April 6 and 7, 2008, resulted in many workers joining street protests after their shifts. This has been widely cited as one of the factors leading to the January 2011 nationwide uprising.

Since 2011, there has been a rift between Mahalla’s workers, particularly supporters of Sisi’s government and those who are more critical of its policies. This has had an impact on the effectiveness of strikes.

Located in the Nile Delta Governorate of Beheira, the Kafr al-Dawwar Textile Company has also been downsized over the past decade, from well over 8,000 workers to around 7,000.