Four young men walk down the Manial Corniche in navy-blue overalls on a Monday afternoon. Young couples and middle-aged men on midday breaks sit around, while others pace up and down the river in a hurry. “Come see what we’ve got! A 15-minute play on the street!” the performers sing out to drum beats and a melodica as they make their way to a simple set-up of flipchart, cardboard box and dusty black cloth lying on the sidewalk further down the street.

“What are they? Garbage men?” one school kid asks his friends loudly as they pass.

In fact, they’re the newly formed Masl theater troupe, who are performing their second show (and first street show) as part of Mahatat for Contemporary Art‘s touring Art in Transit project.

Manial was one of the last stops on a five-day tour which ran between October 22 and 26 in Port Said, Damietta, Mansoura and Cairo. To an eager public comprised mainly of children and teenagers in school uniform, they presented their performance, Sayes Omourak (an expression encouraging flexibility when dealing with problems). 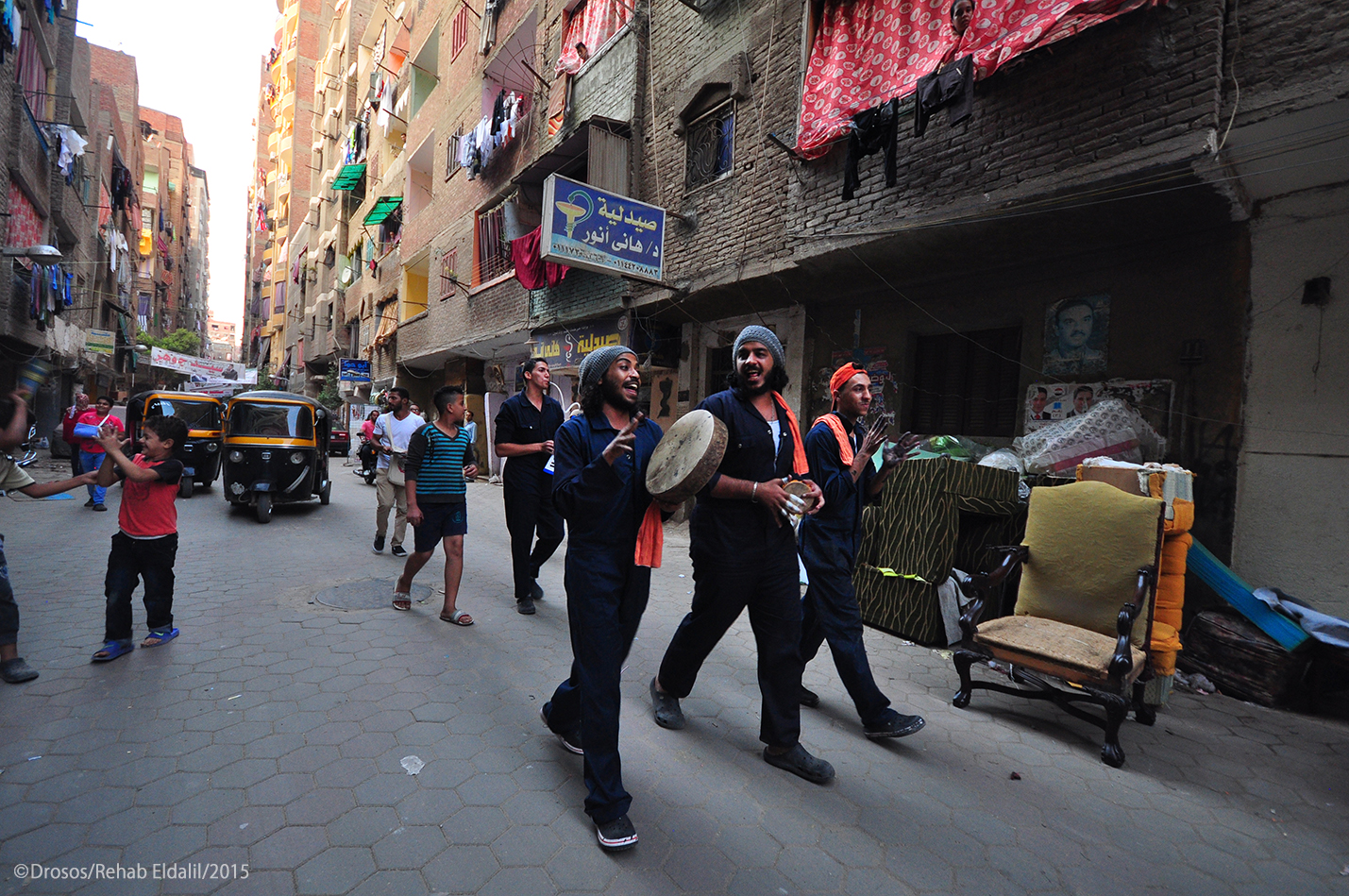 Gathering crowds for the performance in Cairo’s Ard El-Lewa

The actors lead the crowd to the location, and the show kicks off with singing. The audience is asked to clap along at certain moments. Then, actor Ahmed Koundy starts telling the audience about his character, who works as a sayes. Anyone who drives in Cairo will know what a sayes is, but for those elsewhere, the sayes is somewhat akin to a parking attendant. The set-up for a sayes in Cairo is informal, though, with a guy or a group controlling a street or block and helping people park on it — or even if they don’t help, still expecting to be paid. 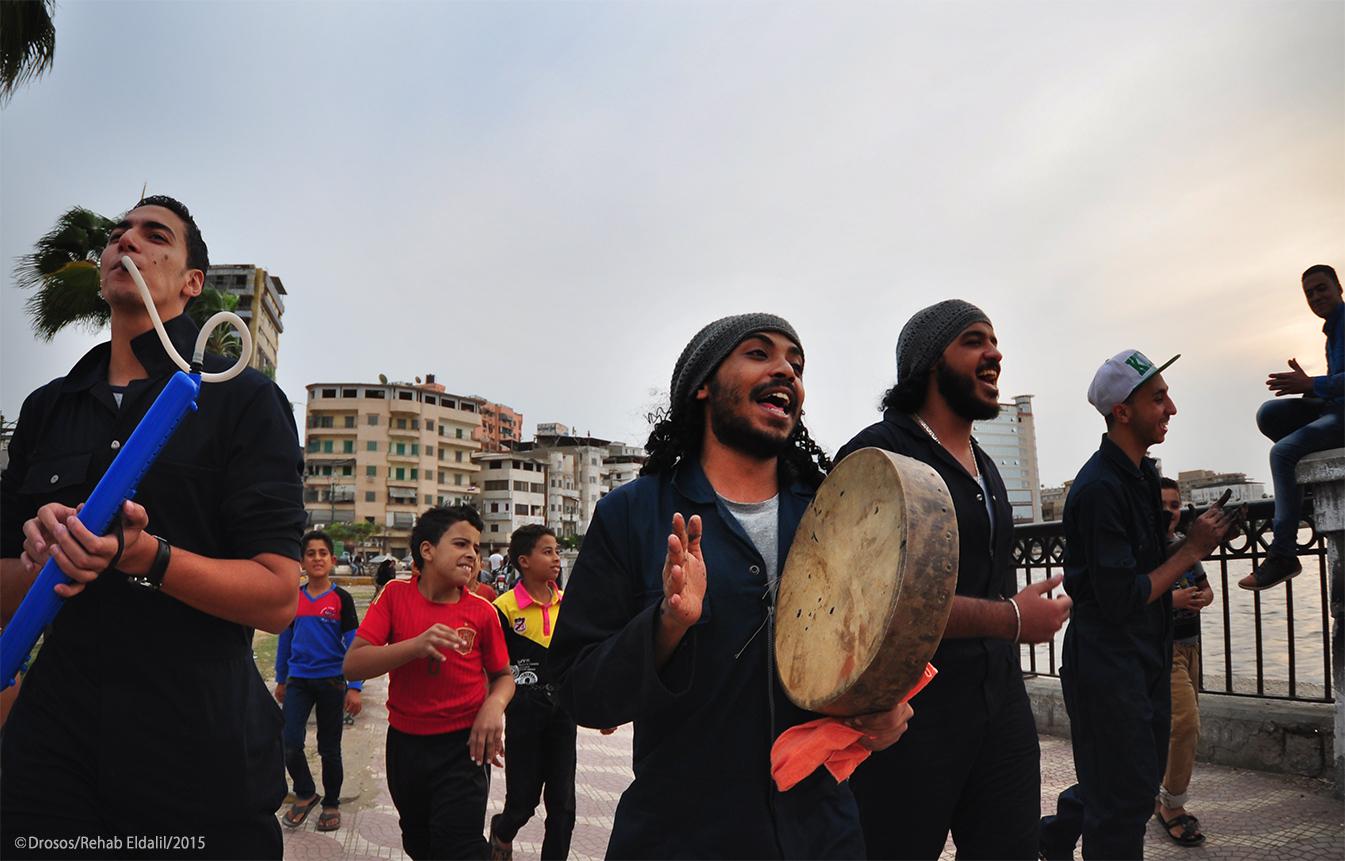 Gathering crowds for the performance in Damietta 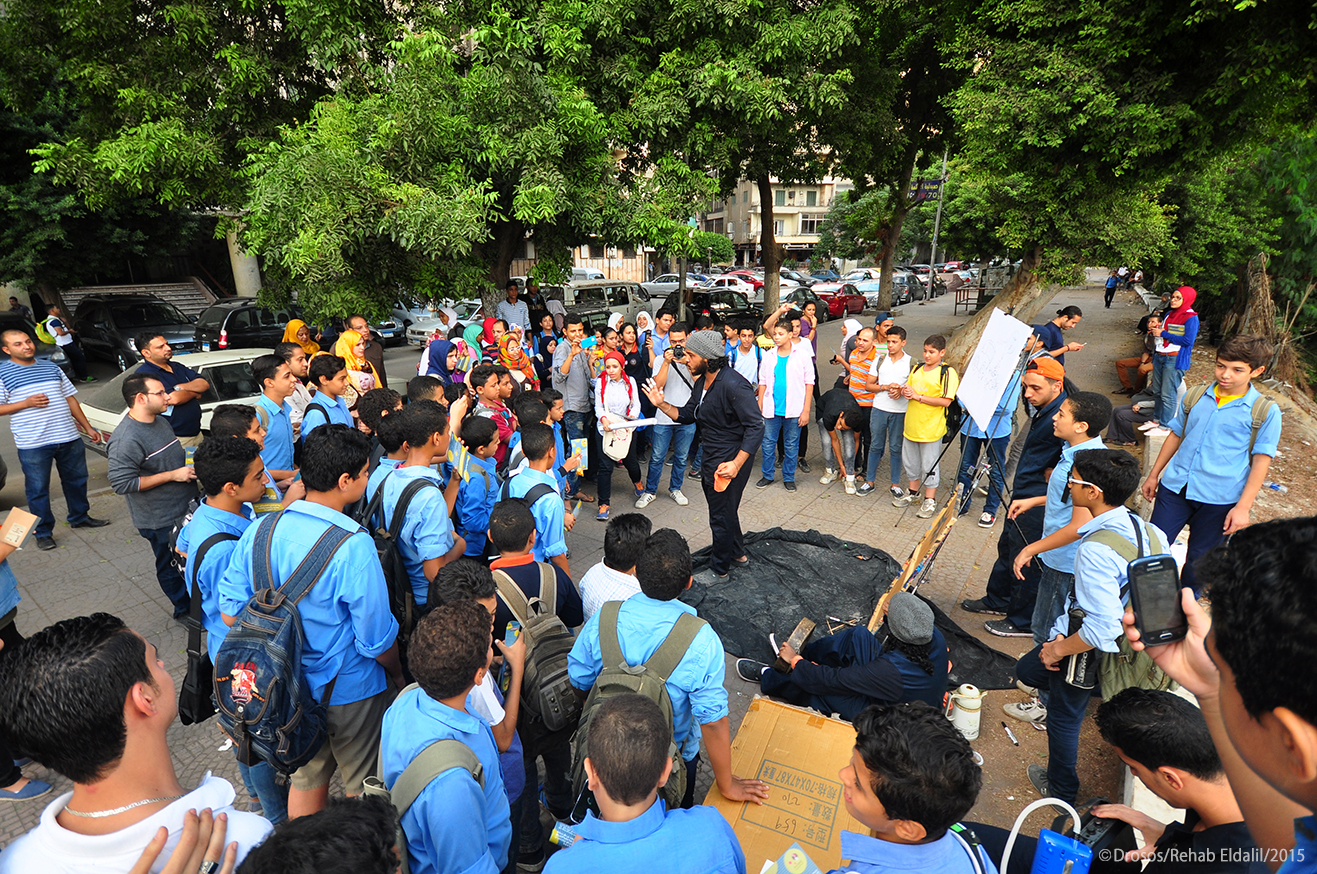 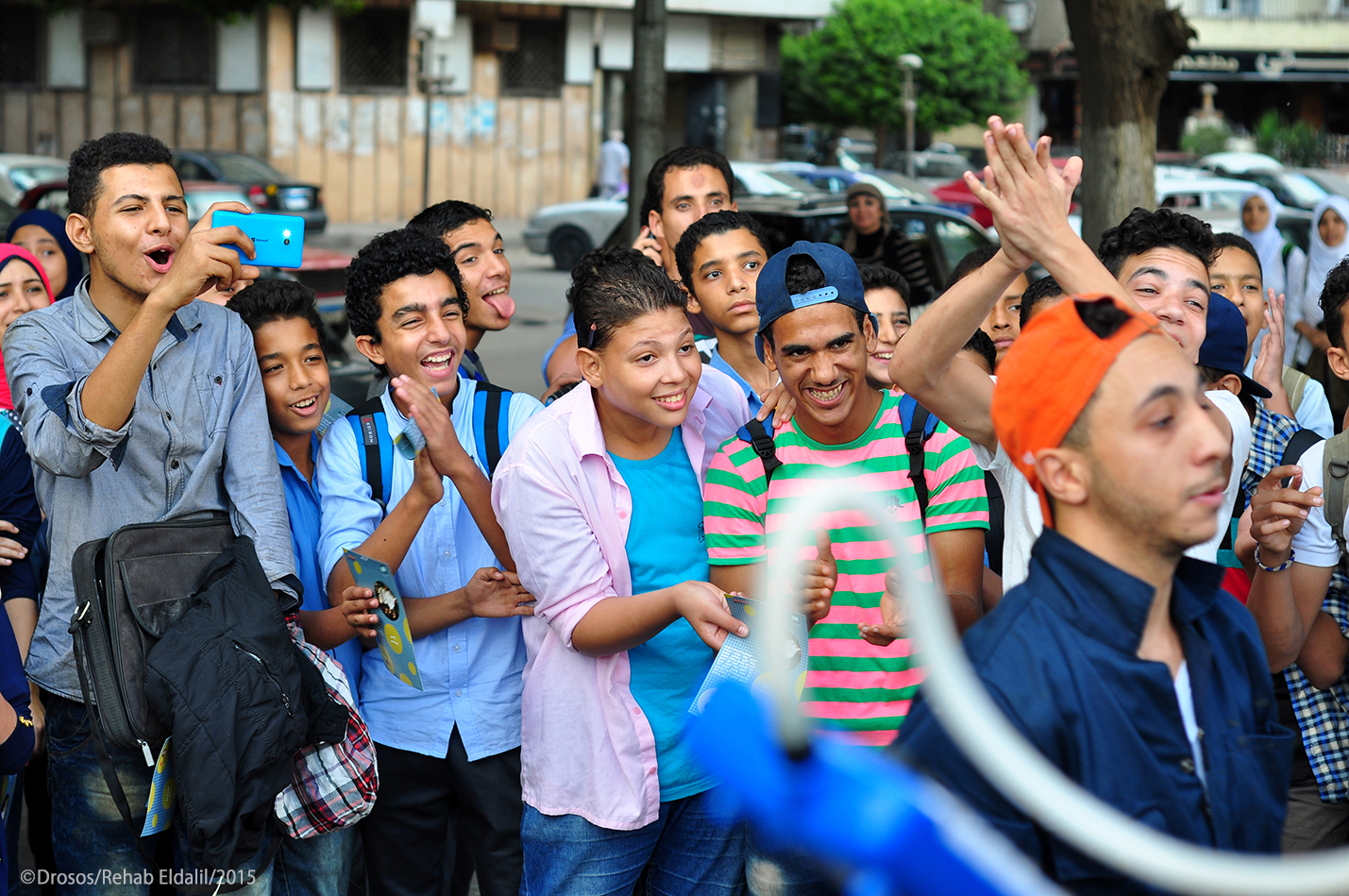 Ahmed Mohamed’s live drawing during the performance in Manial

“We wanted to use the language of the sayes to highlight this idea of empty consumption — when you pay money and don’t get anything in return,” Koundy tells me after the performance. “Although the sayes is someone who works hard, he also often claims money for work he hasn’t done.”

“The concept is how our society functions by just going with things,” adds fellow performer and the show’s director, Ahmed Abdel-Fattah, known in theater circles by his nickname Dodo. “It’s about the informality of our system.”

Sayes Omourak is short and intense, with the crowd completely involved in the process. The actors recite poetry, use storytelling, and one performer, Ahmed Mohamed, does two fast-paced live drawings that keep us eagerly anticipating what he’ll come up with next.

Masl keep their idea clear and their audience engaged, many singing along to the classic songs they have adapted, such as Nagah al-Mougy’s Hankoura, which closes the show. They seem to have a very promising career ahead of them as street performers, an art form that had been very common in Egypt around the turn of the last century, then died out due to the introduction of cinema, television and the increased suspicion of security forces. 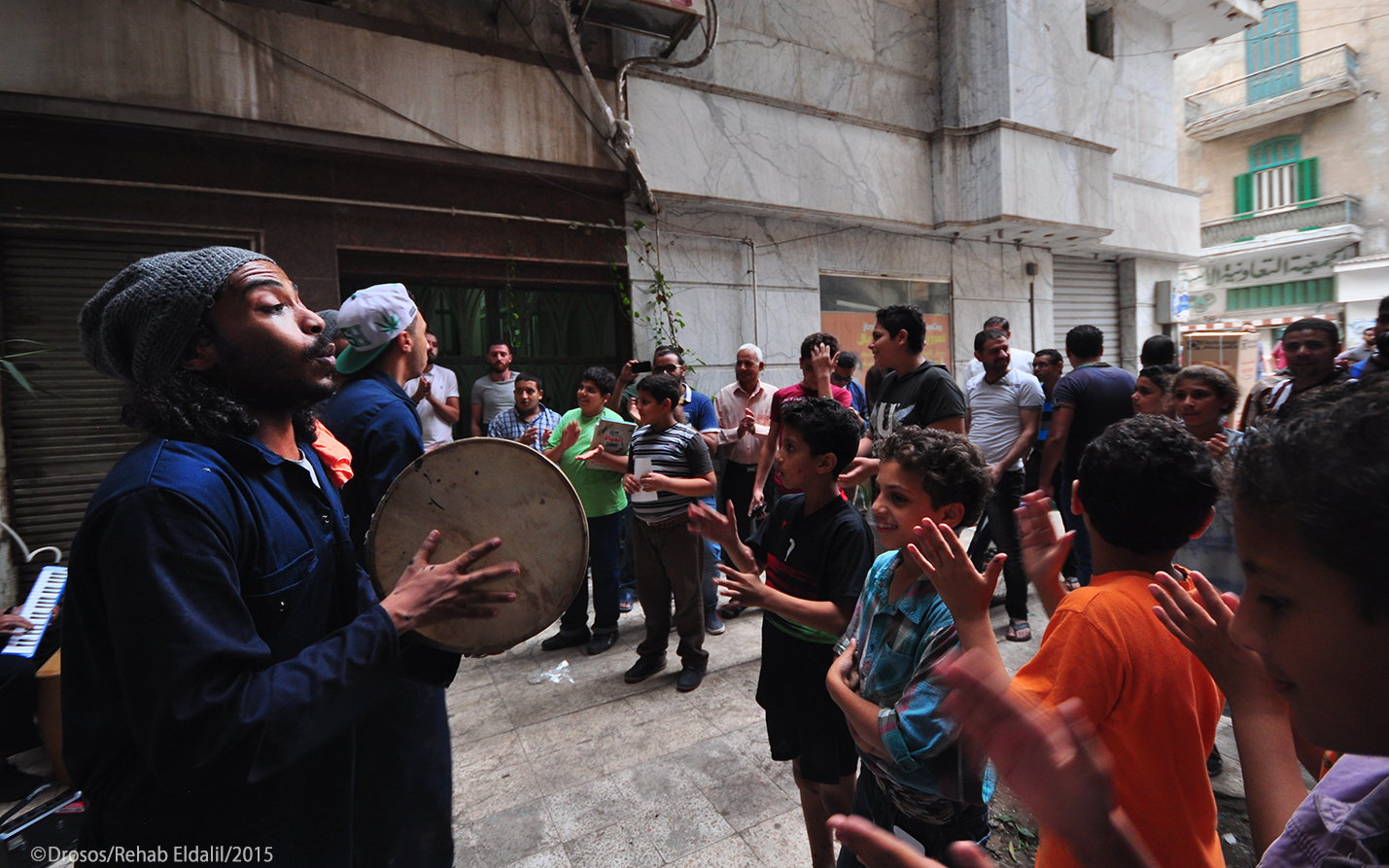 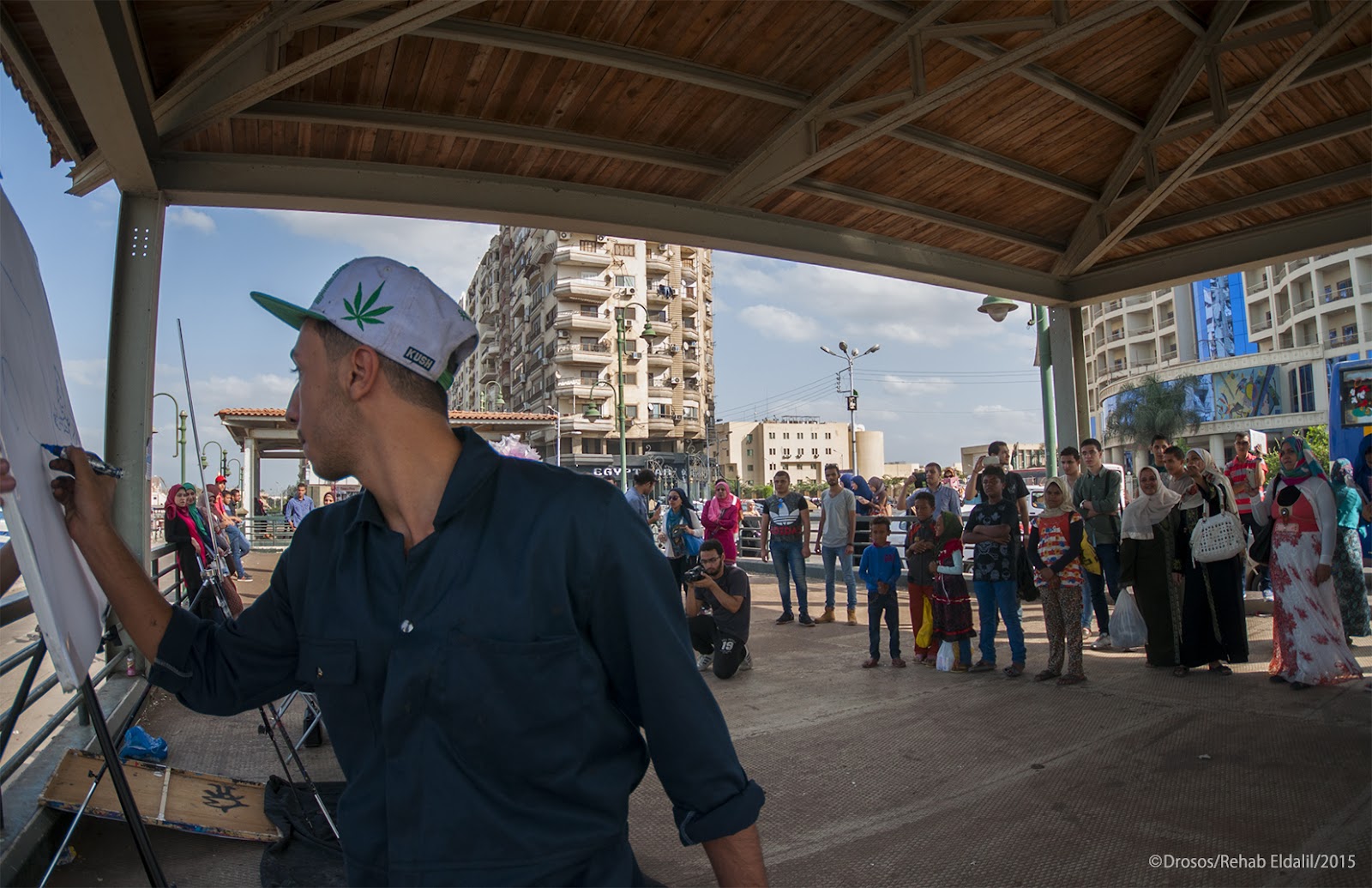 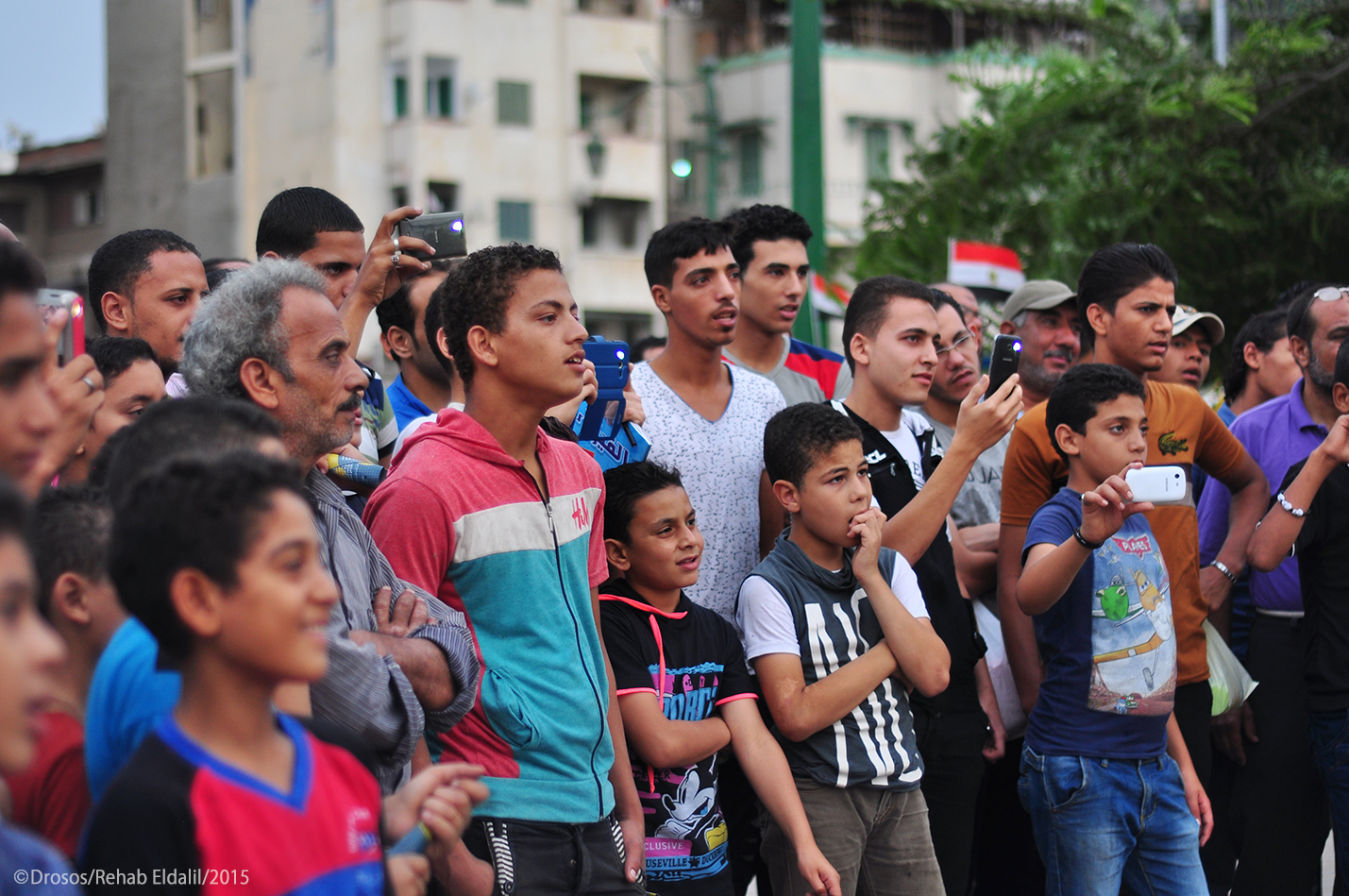 There’s something magical about observing how a crowd forms around a performance then scatters as soon as it’s over. While everyone was going about their own lives during that day, they unexpectedly found a purpose to unite them for a limited time, gaining a dash of positive energy, then moving on after having shared an experience with strangers, and by strangers.

This is what’s so special about what Mahatat does. Mahatat isn’t the only group enabling artists to adapt their work for public space, nor are the artists who work with them the only ones who present work in public. But with increased security on the streets, especially in large cities, it has become increasingly difficult to hold public performances without security permits and clearances — which Mahatat takes care of, along with organizing the logistics and building local support networks in various localities to make these happenings happen.

Masl’s performances in the four cities were the fifth tour in a continuous series ran by Mahatat under its Art of Transit umbrella, which began in October 2014. They hosted the Abu Karim Marching Band along with the Kousha Puppets Troupe, then El-Mazzikateya jammed in public spaces with local musicians for the second tour. Early this year they hosted Teatro Theater Troupe, who performed classical music on balconies, then a tour with clown troupe Outa Hamra over the summer.

The tours are part of Shababeek/Access to Art, a larger three-year umbrella project Mahatat is working on with funding from Drosos. It also includes workshops in various artistic disciplines, such as literature, origami and improv-theater. They’re planning more tours with other artists in 2015, along with various workshops and projects in the cities they’ve built a base in since becoming active in 2011.

AD
You Might Have Missed
Where do old lesbians go to die?
What we talk about when we talk about trees
Carbon Colonies & A Green New Deal
Mugamma revisited: Reimagining the building and the square
AD
Rowan El Shimi
Culture journalist
108 articles on Mada

Topics
Related
clowning
In photos: Clowning around in Old Cairo
Amir Makar | It's rare to see a clown show in Cairo, never mind in one of Cairo's oldest streets, Al-Moez, and in
Mahatat
In photos: Classical music on Egypt’s balconies
Rowan El Shimi | In four Egyptian cities over a weekend this month, one could be walking down the street and all of a
D-CAF
‘Le Prince Séquestré’: A play about inside and outside
Naira Antoun | While Freud thought that repression helps minimize conflict, this play’s violent backdrop points to