Cairo commuters are being challenged to re-think one of the city’s chronic social ailments by a new series of comics tackling sexual harassment that are plastered on the walls of certain metro stations.

The comics are part of the “What will you do?” campaign launched on Saturday by the non-profit group Imprint Movement in collaboration with Al-Moltaqa for Consulting and Training.

The campaign hopes to show the effects of sexual harassment on Egyptian society as a whole, according to a statement by the movement.

Created by artist Ahmed Nady, the comics address the challenges women face on a daily basis — from dealing with victim-blaming culture to not feeling safe in public space — that impact their “personal and professional life,” and thus “the entire society,” the statement said.

One comic shows a young woman finding it harder and harder to tolerate daily harassment. 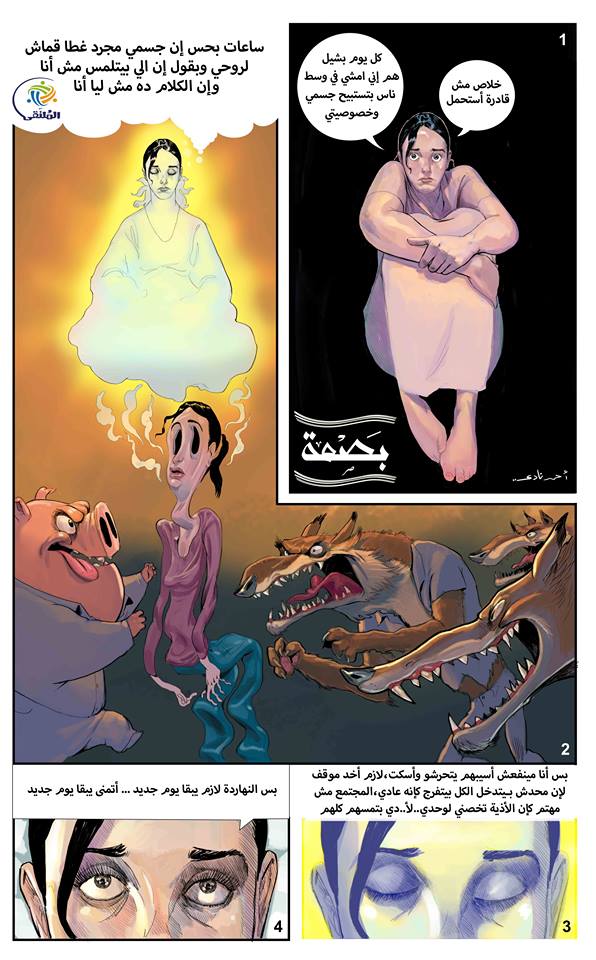 “Sometimes I feel like my body is just a piece of cloth covering my soul, and I tell myself that I am not the one being touched and those words aren’t directed at me,” she thinks to herself.

She is then shown debating which outfit to wear, imagining the different comments each would elicit from harassers.

“This is the nightmare every girl faces every day as she picks out her outfit before going out,” the movement said on its Facebook page.

But “all reports and studies show that it’s not about the outfit. Women in veils and niqabs as well young girls are subjected to sexual harassment,” the statement pointed out.

The movement cited an Egyptian Center for Women’s Rights study that found 72 percent of veiled women in Egypt said they had been subjected to harassment.

The comic then shows male passengers in a microbus reacting to the young woman.

“This woman can be an influential person in your life,” the comic reads. “Sexual harassment doesn’t harm her alone, it harms us all.”

Imprint is a social issues-focused group that started in 2012 with the aim of battling discrimination based on gender, culture or race by spreading the culture of diversity, according to its mission statement. The group has been focusing on sexual harassment in particular through tactics ranging from one-on-one conversations to organizing workshops, group cofounder and General Director Abdel Fattah al-Sharkawy told Mada Masr.

Through these conversations and workshops, group members found that most Cairenes weren’t aware of what sexual harassment actually entails, and rarely relate it to their own day-to-day lives if they’re not directly impacted.

“We wanted to make that link” through the comics campaign, he said.

Imprint decided to work with comics because “they’re catchy and colorful,” drawing people of all ages in to explore the stories they tell, Sharkawy continued.

The comics differ from typical public service announcements because they rely on story-telling instead of propagandistic slogans, he added, so they “make you think and form an opinion.”

Sharkawy said Imprint requested permission to post an advertisement in order to acquire the necessary permits to put the comics up in metro stations.

The campaign first appeared on the walls of the Shohadaa metro station in downtown Cairo, and will next move to the Mohamed Naguib, Sadat and Attaba stations. Other posters will also be hung in the Helwan University, Mansheyyet El Sadr and Cairo University stations, which were targeted due to their high-volume foot traffic. The campaign will run until February 15, 2016.

Sharkawy said he spent an hour at the Shohadaa station observing the reactions of passersby on the first day the comics were installed. Every two to four minutes, people would stop and read the whole comic “from the first panel to the last,” he said.

“Many people were happy and were discussing the issue with each other,” Sharkway said. “It was amazing.”

Topics
Related
female detainees
Police officer accused of sexually harassing woman as she left church
The Interior Ministry will investigate accusations that a low-ranking police officer sexually harassed a
American University in Cairo
Woman artists do well as CairoComix launches
Rowan El Shimi | The first edition of CairoComix got off to a good start on Wednesday evening. During a closed launch
Dalia Abdel Hameed
Five takes on female cops fighting harassment on Cairo’s streets
Dalia Rabie | "If the process is not developed properly, we risk reproducing the very patriarchy we are trying to fight."
Harassmap
Criminalizing harassment: Local initiative introduces new campaign
Harassmap launched the “A harasser is a criminal” campaign on Thursday to raise awareness about