Somewhere on a plinth out in the private residential compound Westown stands a wooden knife-sharpening wheel of the kind still carried on the backs of old, bent tradesmen around the city’s popular neighborhoods. It is painted gaily in red, green and yellow and, if you ignore its everyday function, brings to mind both the fairground and the fairytale. It has been placed on display by the artist Ayman Ramadan as part of his exhibition of found objects, Mere Real Things. And barely anyone who lives in Westown has any idea what it is for.

Townhouse West is a survival gambit, a deal made between Westown real estate company SODIC and Townhouse. The gallery will provide artistic matter in a gutted shop space in Westown under the name of Townhouse West, and the company will contribute to keeping the doors open at Townhouse’s original art space in downtown Cairo. This is happening because state funding is extremely problematic, and the great pulses of foreign cultural funding that arrived following various events since 9/11 have slowed. Meanwhile, the state has turned the thumbscrews on NGOs, making leaders of art organizations more liable for arrest.

As Townhouse director William Wells puts it, “We have to look for different avenues for survival, and corporate sponsorship is one way to do that. In fact, it’s even more serious than survival — it’s a battle, as corporates have a very different way of thinking than a not-for-profit funder. But we are trying to set a precedent with SODIC because they are open to it.”

So how the knife-sharpener’s wheel ended up in an annex space called Townhouse West is not just the story of a touring exhibition, but two alien worlds living side by side and an art scene in crisis.

The exhibition is a collection of found objects selected by Ramadan that have strong working-class, handmade or folk associations, such as a foot-operated clothing iron and a worn-out broom end — objects largely replaced by upgraded technology and mass-produced imports. It is a typical gesture for this artist, whose work mines the material and lived realities of working-class Egyptians. His 2004 video, Iftar, for example, is a simple and almost painterly documentation of the breaking of the fast during Ramadan at the free meals held in public space. The taboo Ayman Ramadan breaks here is not in the portrayal of a religious ritual, but in unromantically depicting the lives of the poor in contemporary art, which has long been a major sensitivity in Egypt.

With this awareness, the exhibition pins the found objects at several conceptual thresholds, at the boundaries of art object and non-art object, uselessness and usefulness, working-class trash or upper-class fetish object, which swings us right back round to art-object-or-not.

This tired Duchampian hokey-cokey gets an extension to its sell-by date on some counts. The first is to do with Ramadan himself and his working-class origins: He’s no pith-helmeted bourgeois enthusiast gathering souvenirs in the foreign country of another class. His proposal of these objects as worthy of attention — his refutal of the fact that they need to be art objects in order to be valued — is potentially autobiographical, keenly felt and utterly sincere.

Secondly, he is right: Many of the objects themselves are just supremely evocative. They are plain evidence of human ingenuity, resourcefulness and creation. At core, they are artistry. That’s worth noticing, no matter where these objects are placed. Notwithstanding the wheel — the undoubted star of the show — there’s other things, like two small, soft brick cone shapes displayed in a tiny glass case that turn out to be homemade spinning tops; two molded sugar horse effigies topped off with raffish plumes of shiny plastic (a kind of candy sold at moulids); a tiny brass intaglio attached to a worn piece of string; brooms made from fronds of date palm. They are humble, not entirely legible things. They feel as though they are from a far-away world, carefully selected to exclude the cheap imported mass manufactured objects that also now flood this socioeconomic space. This is, in part, explained by the exhibition wall text, which describes the artist’s intention to select objects from a particular era that could once have been found in bourgeois homes, but now have “sunk” to the working classes, and, it goes on to say, will eventually pass out of all useful existence altogether. We are looking at wooden, handcrafted authenticity’s last stand. The almost total absence of plastic in the room indicates throbbing nostalgia toward a particular vision of class existence. 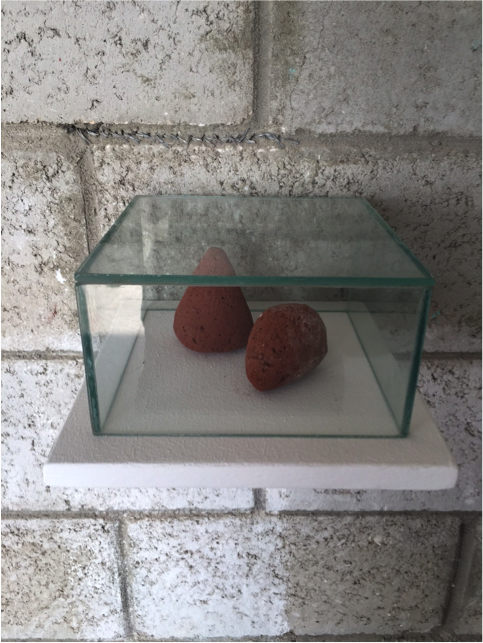 As such, the anthropological bent of the exhibition is undeniable. “Look, you flimsy contemporary art-goer, here are things, things that you are too rich and pampered to understand.” A well-informed gallery attendant is on hand to talk you through what each object is actually for. Even as the objects hum alone in their awkwardness, giving off distinct Arte Povera feels (but if they could talk, you’d have to explain to them what that art movement was). The layers of cultural translation from art space to class abjection run deep, and cut both ways.

Explaining the original function of these objects raises the obvious question: why not just have wall texts? We know why — because that would be tacky, overly anthropological, a form of class colonialism, a crass way to turn the vast majority of Egypt’s population into objects for museum study. Particularly here, out in a gated private residential compound (more on this in a moment). But this answer strikes me as being more about politically correct anxieties than a genuine critique into how we display people, objects and culture. What’s the difference between a wall text — that tool of museological authority — explaining things to you and the bright young proto-curator, himself an instrument of contemporary curatorial authority? 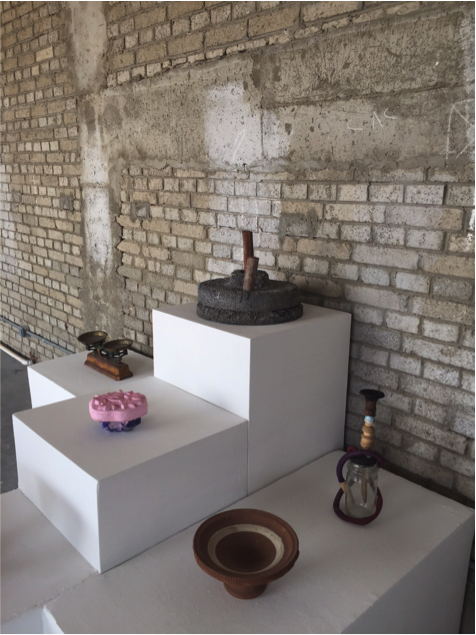 The key claimed difference here — and it’s one I believe in very much — is that the contemporary art context offers a more tricksy, liberated, less didactic space in which we can take on the world beyond everyday means-to-an-end realities. Here, hopefully, the ethical issues of displaying the broken objects of one class of people as curiosities for another class of people take on an excusable, indeed valuable, complexity. But this crucial spot, out here in Cairo’s beleaguered contemporary art scene, is where things get very sticky indeed.

What is the contemporary art context that it allows such magic to be performed? Posing this question in Egypt, where such a context has not long existed (and has never done so without a fight), has provided immense opportunity for reimagining these contexts on Egyptian terms. From the position of an “art-world periphery,” numerous organizations (not least Townhouse) have constantly reconsidered the full intellectual, material, architectural and economic apparatus that purports to construct the liberatory space of contemporary art.

This can be incredibly simple. I am reminded of how Charles Esche, director of the van Abbe Museum in Eindhoven, addressed the same question as regards education. He described a radical education project, the “Protoacademy,” he set up with students of Edinburgh College of Art in 1989: “It was simply a table with chairs around it, and one of its principles was that anyone who came to sit there was part of it.”

Townhouse West is an unplastered shop space with a concrete floor and some lighting, roughly akin to Esche’s table and chairs. In setting up Townhouse West, Townhouse has, admirably enough, refused to echo the deeply consumer-led cultural signals given off by Westown Hub, filled as it is with chain restaurants, woven plastic garden chairs and obsequious maitres d’. This backdrop, I think, explains the curatorial determination, however hamstrung by these conditions, to confront Egypt’s rich with the beautiful detritus of Egypt’s poor.

But we are missing one key detail of Esche’s formula: “anyone who came to sit there was part of it.”

The taxi driver who brought me to Westown was asked to surrender his ID at the gate. Westown is divided into those who consume and those who provide. The latter are there on the condition of (at least symbolically) suspending their citizenship. But when Ramadan’s work clearly encourages us to read these objects with all the mercurial liberation of the contemporary art context, it becomes extremely urgent to reaffirm the obvious — that this context is necessarily and emphatically a public one, to which everybody is invited.

The fact that this is not the case weakens Ramadan’s exhibition. How can one propose and discuss the aesthetic beauty, cultural validity, complexity and value of these things, and the world from which they come, when the very ground one stands on is built explicitly not to be that world? This is the institutional condition of Townhouse West, and of Mere Real Things.

I have led a contemporary art organization in downtown Cairo, and I see the long view Townhouse is taking: if the contemporary art scene is ever to wean itself off its dependence on foreign cultural funding or a bullying state, it must urgently nurture artistic appreciation within private Egyptian sources. The irony here is that Townhouse is a space that defied all cries of “impossible!” in the first place, by being among the earliest organizations to attempt an inclusive model of contemporary art in a working-class downtown neighborhood. And while we may well have to adapt to the expectations of private supporters, we must decide which compromises are investments in the long game, and which are ultimately detrimental to both art and its publics. The question that remains — as ever for the art world at large — is whether the ends justify the means.

AD
You Might Have Missed
Mugamma revisited: Reimagining the building and the square
Carbon Colonies & A Green New Deal
Where do old lesbians go to die?
What we talk about when we talk about trees
AD
Mia Jankowicz
12 articles on Mada

Topics
Related
urban planning
Creative Cities: Can downtown accommodate the many visions for its future?
Lara El Gibaly | Can the multiple visions for downtown Cairo coalesce to create more accessible, multifunctional public
architecture
Egypt at Venice Architecture Biennale 2016: An open letter to the Culture Ministry
Mohamed Elshahed | Egypt can potentially present a successful exhibition, given the rich field of work undertaken here in
Culture Ministry
The Egyptian pavilion in 2015: What happens in Venice doesn’t always stay in Venice
Alexandra Stock | Unless muddy politics take a backseat to getting quality work produced and shown, the Egyptian pavilion
Cairo
Cultural enlightenment for Cairo’s downtown futures
Marie-Jeanne Berger | Ismaelia is a consortium of Egyptian and Saudi investors: Egyptian billionaire Samih Sawiris (with a