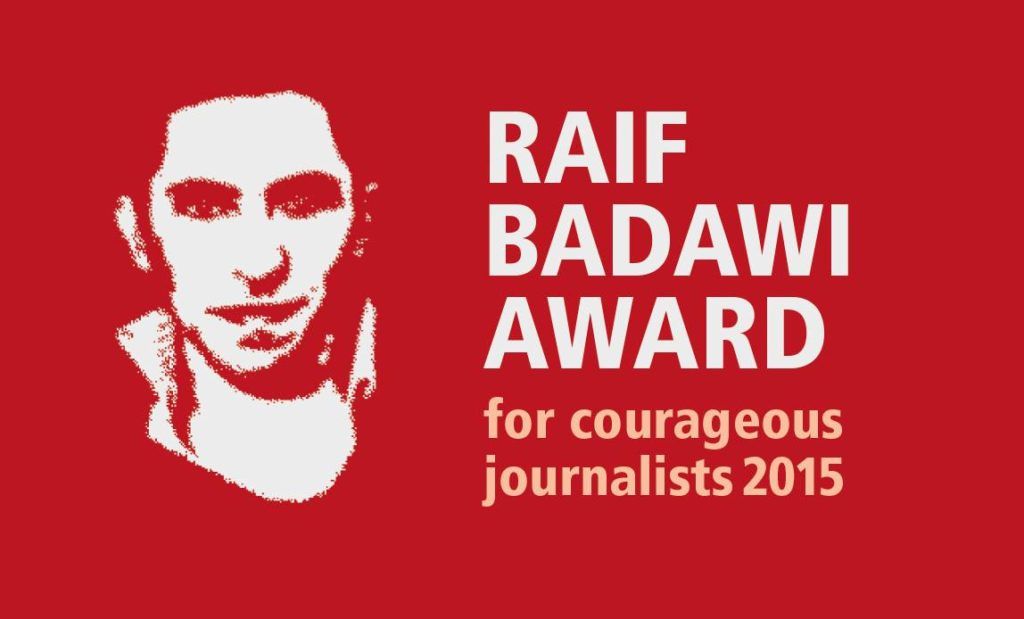 A new award has nominated Mada Masr, along with five other candidates from different Arab countries, for “highlighting documentation and analysis instead of polarizing.”

The Raif Badawi Award for Courageous Journalists was established this year by Ensaf Haidar, the wife of jailed Saudi blogger Raif Badawi. Her husband is currently serving a prison sentence in Saudi Arabia on charges relating to his blog, Free Saudi Liberals.

Haidar, with the cooperation of the Berlin-based International Media Alliance (IMA) and its German partner Friedrich Naumann Foundation for Freedom, aims to honor her husband’s commitment to freedom of expression with the award, which focuses on Arab countries.

Haider and a group of German media professionals are on the award jury. They describe the situation in Egypt as extremely polarized, with supporters of the Muslim Brotherhood on one side and supporters of President Abdel Fattah al-Sisi on the other.

“Newspapers like Mada Masr that try to document facts rather than presenting populist arguments are scarce,” the award’s Facebook page said.

Badawi came under the Saudi regime’s iron fist when he launched the Free Saudi Liberals blog, which opposed the Saudi government, in 2012. He was fined 1 million Saudi riyals and sentenced to 10 years in prison and 1,000 lashes after being accused of apostasy and insulting Islam. Haidar and her children were granted political asylum in Quebec, Canada, in 2013.

Badawi was named co-winner of the PEN Pinter Prize earlier this month, along with British poet James Fenton. Wikipedia co-founder Jimmy Wales accepted the award in London on behalf of the Badawi family. The prize awards a British writer for outstanding literary merit, as well as an international writer of courage who has been “persecuted for speaking out about their beliefs.”

Freedom of expression in Egypt has been negatively affected by the political turmoil the country has witnessed since the ouster of former President Mohamed Morsi by the military in July 2013. In June, the New York-based Committee to Protect Journalists (CPJ) reported that the number of jailed journalists in Egypt is at an all-time high.

The organization wrote that at least 18 journalists were recently imprisoned, while other estimates put the number at 30 or more. CPJ found that this was the highest number of journalists in prison since the organization started collecting data in Egypt in 1990.

One of those jailed is photojournalist Mahmoud Abou Zeid, known as Shawkan, who was arrested in August 2013 during the violent dispersal of the Rabea al-Adaweya sit-in. After two years of pre-trial detention, Shawkan’s referral to criminal court was confirmed in September.

In August, journalists working for Qatari-based Al Jazeera English were convicted of disseminating false information and sentenced to three years in prison, but were among those pardoned by Sisi in September.

Other nominees for the award include Libyan journalist Reda Felbhoom, whose work on freedom of expression and its relation to religious extremism posed threats to his life by extremist religious groups in Libya. Also among the nominees is the Bahrain Center for Human Rights, the members of which were repeatedly targeted by security forces due to their active role in exposing rights violations in the country following its 2011 uprising.

Leading Moroccan journalist Ali Anouzla is nominated for the price for his vocal and independent reporting, one of the reasons behind his politically motivated indictment in 2013 on charges of supporting terrorism. The Lebanese Samir Kassir Foundation, which defends freedom of the press in the Middle East through its efforts to monitor violations against the press, has also been nominated.

The nominees have been announced on a daily basis over the past week and the winner will be announced on October 17, after which an award ceremony will take place the following month in Germany.

“We believe that creating an award in Badawi’s name is a very strong signal, not only for activists who share the same fate, but also for governments in the region that suppress freedom of expression,” Constantin Schreiber of IMA told Mada Masr.

With the award, they hope both to raise awareness of issues of press freedom in general and bolster attention to Badawi’s case specifically, providing “another platform for the #FreeRaif campaign. The international publicity for Raif Badawi’s case probably led to the suspension of his flogging.”