SAADA – Under the sound of warplanes and anti-aircraft guns returning fire, thousands hold their breath, put their hands over their ears, shut their eyes tight and freeze.

Then the search for houses-turned-rubble begins.

Missiles have rained down on Yemen since Saudi Arabia formed a 10-member military coalition to launch an extensive airstrike operation on March 26. The coalition is trying to cripple the Houthi insurgency that suddenly seized the capital of Sanaa in September 2014, and restore the internationally recognized government of President Abd Rabbuh Mansur Hadi, who fled the country after the Houthi assault.

The campaign has pushed the Houthis out of major southern cities, including the strategic city of Aden. Next in line is the north, chiefly Saada — the birthplace of the Houthis. So far, Saada has been the hardest hit by the airstrikes.

The Joumhouria Hospital is the only one still functioning in the city. Sawada Hussein, 42, lies in a hospital bed here with both her legs broken. She is the only survivor of an airstrike that hit her house earlier in August. Her husband and four children died in the assault.

“I was standing to say my sunset prayers. The minute my forehead touched the rug, the room collapsed on my head,” she says. “I screamed ‘help’ at the top of my lungs. Then I felt nothing.”

“All my sons are gone,” she continues in disbelief. Sawada’s daughter-in-law bursts into tears next to her bed, soaking the black silk veil covering her face.

The UNESCO World Heritage Committee lists Saada as one of the oldest medieval cites in Yemen. It’s a long-neglected place on the periphery that has survived on smuggling and trafficking away from the eyes of the central government. Now, the city is nearly isolated from the world.

Warplanes have struck power stations and telecommunication towers, leaving Saada in darkness after each sunset. Few lights are seen amid a severe shortage of fuel supplies, save for the homes of those who own generators. But they struggle to find fuel on the black market — fighter jets have bombed the tanks carrying fuel from southern provinces.

On the drive to Saada, burned trucks litter the side of a road that runs by the detritus of bombed-out bridges. Houthi fighters armed with AK-47 rifles, many of them youngsters, chew Qat while they man the checkpoints at the city’s entrances and exits. One claims that they’ve caught bombers disguised in women’s black robes trying to enter the city to blow it up.

Demolished shops line the main street in the city center, as well as shattered windows and twisted steel gates. Government buildings, banks, schools and police stations have been leveled. Local city officials estimate that half of the population has fled their houses, but they don’t have any figures showing where they have gone, or if they left the city altogether. 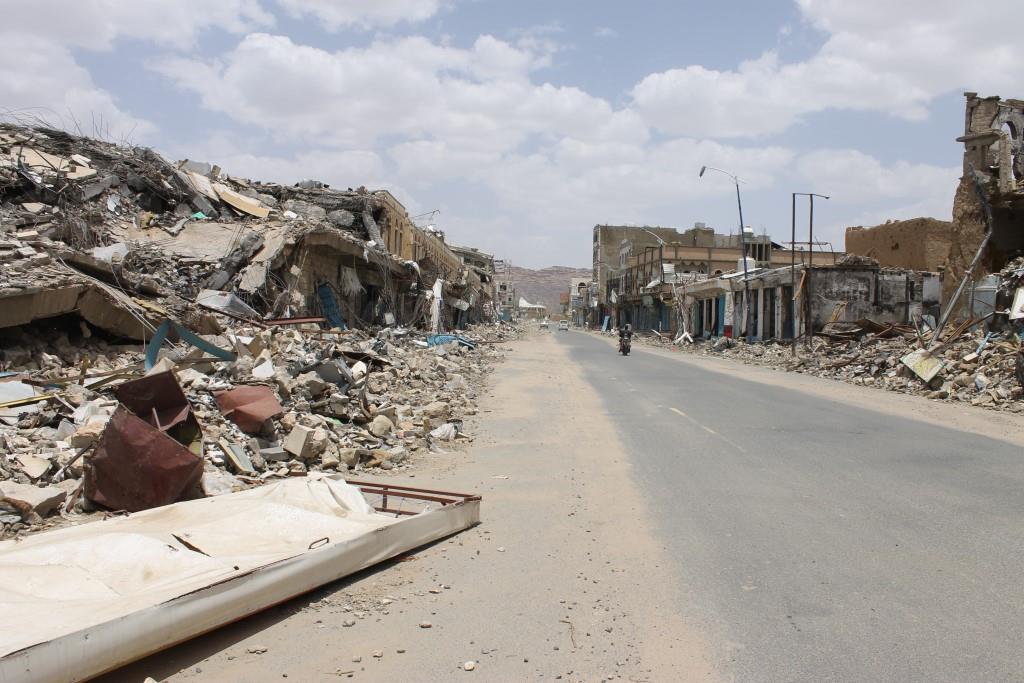 Saudi has demonized Saada as the source of Houthi reinforcements and the home of its leadership command centers, training camps and weapon depots. Rebel leader Abdul Malek al-Houthi is believed to be hiding in the mountains of Marran, a four-hour drive away.

Located right on the border with the oil-rich kingdom, Saada is an easy target — but also an increasingly unstable one. Militias operating out of Saada have reportedly been conducting cross-border attacks. The Houthi TV network Al-Masirah has aired footage it claimed was filmed from inside the Saudi territories as a show of force.

“Saudi and coalition forces have no claims with regards to Yemeni territories. This is confirmed and absolute,” Assiry said. “What we have is a tactical objective to prevent Houthi militias from taking advantage of the positions they control, which overlook Saudi locations.”

He pointed out that this has been the coalition’s objective since the launch of military operations.

“Houthi militias are facing great difficulties inside Yemen in a number of governorates and have been hit by large casualties,” Assiry continued. “Therefore, they now believe they need to improve their troops’ morale by targeting Saudi border sites in attacks that have recently increased in frequency.”

The coalition is trying to eliminate the sources of these attacks, expel the Houthis from their current positions close to the Saudi borders and prevent their return, Assiry explained.

Saada was first declared a “military target” on May 8, after Houthis carried out attacks inside Saudi territory. The military coalition warned residents to evacuate before sunset. Many fled, but many more were caught in the crossfire since they had nowhere to go to.

A day later, the United Nations warned that such “indiscriminate bombing of populated areas” is a violation of international law.

When the New York-based Human Rights Watch visited Saada in May, the rights group said that satellite imagery shows over 210 distinct impact locations in built-up areas of the city. The impact is consistent with aerial bombardment. A similar pattern has continued since then — Ali al-Motamaiz, an Ansar Allah city official, says that hundreds of airstrikes pounded the city over the summer. 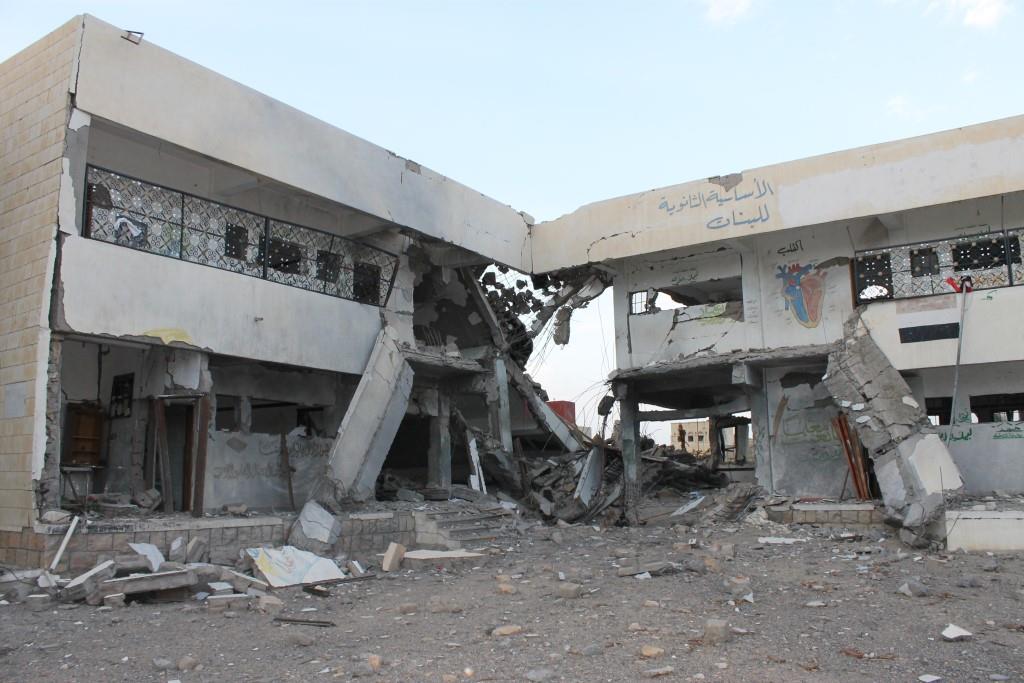 With a broken jaw and a skull fracture, 50-year-old barber Abdullah al-Ibbi recalls when the airstrikes hit his house, killing all 27 of his family members.

“In the blink of an eye, my house turned into a cemetery for 27 souls,” Ibbi laments.

His dark eyes scan the pile of rubble once called home. In the middle of the twisted reinforcement rods and chunks of concrete, he points to his deceased grandchildren’s stroller, his daughters’ colorful dresses, his two wives’ wrecked furniture. Only a golden metal chandelier remains hanging from the ceiling of a gutted bedroom.

“My wives’ gold, my sons’ money and my whole life is lost. What did I do?” he asks, then returns to his barber shop, where he now lives.

The probable target of the strike lies across the street — a now-destroyed Houthi culture center. 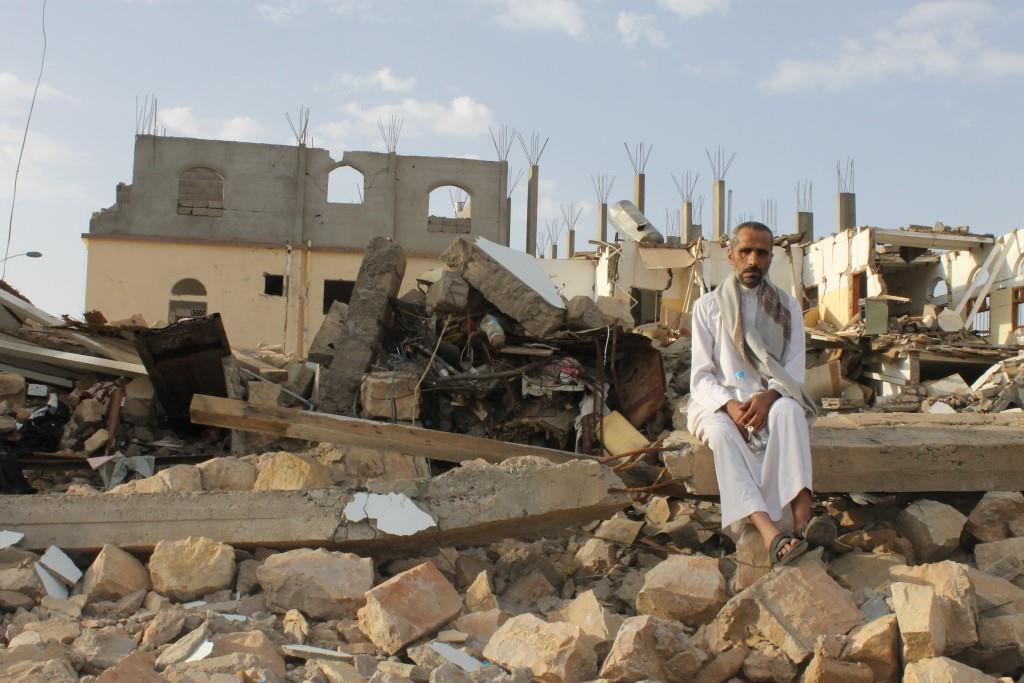 A few kilometers outside Saada, Sabra Valley was the site of one of the worst mass killings since the airstrikes began. In June, missiles killed at least 50 civilians when they hit eight ancient mudbrick houses built at the foot of a giant mountain. Most of the victims belonged to the extended Aram family, and lived off planting Qat fields.

“It was a direct strike that toppled eight houses altogether, immediately creating a dust storm,” says Abdel Latif Ayidha, 23. “After a half hour, a second strike blew the rescuers away.”

He says the villagers had to wait until the next day to search for their loved ones out of fear of further bombings.

The ancient part of the city is surrounded by a 3,000-meter-long wall. From behind that wall, a 40-year-old woman who asked to remain anonymous bursts into tears while recalling the days before she had to flee her home with her family.

“We are dying of fear every day,” she says, gesturing to walls gouged by shrapnel. From her window, she points to the demolished customs department building that was likely the target of the airstrike.

“When I hear the sound of the jets, I get very agitated. My whole body starts to shake and I rush to a room and sit alone,” she says. “Before, I didn’t give much thought to that word, ‘displacement.’ But now I have tasted it.”

Saudi accuses the Houthis of acting as a proxy for Iran. Observers believe that the kingdom — which has failed to confront Iranian influence elsewhere in the region, such as Syria and Iraq — is hitting Yemen hard to heal its injured pride.

“We did nothing. We are not Houthis. We don’t even support them. Why doesn’t Saudi go in a war with Israel and liberate Palestine instead? Why us?” asks the 40-year-old woman from the old city.

International relief groups say that so far, the violence has claimed at least 5,239 lives, with at least 4,493 civilians killed or injured. Another 1.5 million people have been internally displaced, and 21 million people (80 percent of Yemen’s total population) are in need of humanitarian aid, according to the United Nations. The country is on the verge of famine, with close to 13 million facing food insecurity, a UN agency said in August.

The violence has also left the country deeply divided along regional, tribal, political and sectarian fault lines. The southern region, home to a strong secession movement and which suffered the most from the Houthi-led armed campaigns, has joined forces with the exiled government and the Saudi coalition.

But the north — which is predominately inhabited by Zaydi followers, the same branch of the Shia faith that the Houthis follow — has been brutalized by the Saudi-led military operation. People here have had little choice but to side with the insurgents. The scale of destruction revived decades-old hatred toward the neighboring kingdom, and many fear that Saudi’s scorched-earth policy has turned northern Yemen into a hotbed of insurgency.

“The Saudi offensive was a setback to an imminent confrontation between the people and the Houthis,” says Yemeni writer Nabil Sobai. “It gave credit to the Houthis.”

Close to Ibbi’s demolished house and barber shop, slums built of mudbrick houses are occupied by workers who fled the 1990 Gulf War when Saudi Arabia punished Yemen for siding with Iraq by sending more than a million Yemeni laborers back home.

“We see death every day,” remarks Saleh Salman, who lives in one of those houses with his 11 children. He says he was one of the hundreds of thousands punished for their government’s defiance of the Saudis back in the 90s. And today, he says, Yemenis are being punished again.

Topics
Related
Abd Rabbuh Mansur Hadi
A dispatch from Sanaa: Yemen’s ill-being, Saudi’s well-being; but what about Egypt?
SANAA – Ambiguity continues to shroud the extent of Egypt’s involvement in the Saudi-led coalition’s
Egypt-Yemen relations
Yemenis stranded in Egypt yearn for return to war-torn country
Jano Charbel | Estimated to number nearly 10,000, the Yemeni community in Egypt remains divided over the political upheaval
Egypt-Gulf relations
From desert storm to decisive storm
Omar Said | As soon as Egypt announced that its naval and air forces would join the Saudi-led Operation Decisive
Egypt-Yemen relations
Why is Egypt participating in Operation Decisive Storm?
Mostafa Mohie | Egypt’s participation in the military Operation Decisive Storm against the Houthis in Yemen,