اقرأها بالعربية
For elections, Salafis set their sights on Alexandria 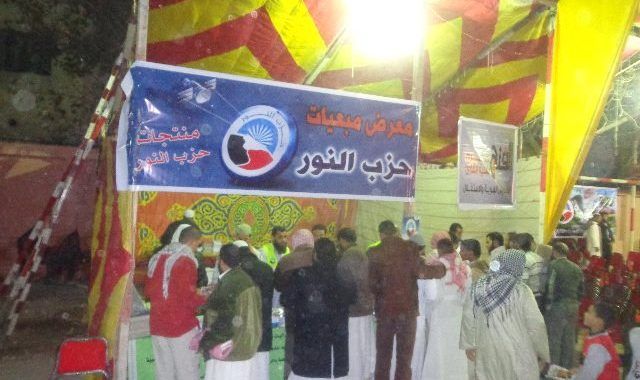 The Salafi Nour Party believes its campaign efforts were instrumental to President Abdel Fattah al-Sisi’s victory at the polls last year, and the sweeping success of the 2014 Constitution in the national referendum (even though both already had strong support before the party mobilized in their favor). But the parliamentary elections are expected to be the real litmus test of Salafi influence.

After a meteoric rise in political life after the 2011 revolution, the Nour Party is now facing an uphill slog in the 2015 elections. The group regularly faces accusations of fraternizing with the banned Muslim Brotherhood, and is fending off a campaign calling for its dissolution on the grounds that its religious mandate violates the Constitution.

Despite initial announcements that Nour would contest over 60 percent of seats, it’s only competing for around 35 percent, says Nour Party general committee secretary Ahmed Rashwan. The party dropped Upper Egypt from its docket to ward off accusations that it was seeking to monopolize parliament, like the Brotherhood had in 2012. Nour Party candidates are only running in Cairo and the West Delta, which includes Alexandria.

Alexandria is the most important contest for the Salafis, which is why Nour nominated many of its prominent members to contest seats across the coastal governorate — such as deputy vice president for legal affairs Talaat Marzouk, member of the presidential council Mohamed Ibrahim Mansour, party vice president Ashraf Thabet, deputy head for media affairs Nader Bakkar and deputy president for foreign affairs Amr Mekky.

Salafis have different strongholds in Alexandria, including the Bakous area in the Raml constituency and the Cleopatra area in Sidi Gaber, where the Salafi Dawah — the party’s non-political mother organization — has its most important religious and charity centers. Nour is also influential in Khorshid and Montaza Awal, Alexandria’s highest-populated constituency.

Despite this grassroots support, the Salafi party’s ability to attract voters is still under question.

Ali Mohamed, a Khorshid resident with Salafi sympathies, says that most of the constituency’s denizens come from rural areas, and family ties to particular candidates or parties tend to influence their votes. He asserts that Salafis claim 70 percent of the Islamist influence here, while the remainder is claimed by the Brotherhood, which usually organizes protests in the area.

But that still might not help the party at the polls, he explains, as most people have lost faith in politicians and aren’t motivated to vote anymore.

A case in point is Khamis Omran, a 37-year-old construction worker who lives in Khorshid’s Tawfiqia village. “We don’t see members of the parliament, they are non-existent,” he argues. “Most of them look after their own interests, and we are left to face death every day.”

“We mobilize on the ground and we are close to the people. We attend their weddings and [customary] reconciliation sessions,” Ammar explains. “We also solve problems of gas shortages, and we serve the people whether or not there are elections.”

However, he admits that family ties may compel even staunch Salafi supporters to ultimately vote for other parties.

Salafis also have a significant presence in Amreya, another key constituency in Alexandria. Moatassem Medhat, a member of an independent coalition to support workers, contends that Salafis control a majority of the villages here due in large part to Salafi Dawah leader Sheikh Sherif al-Hawary, whose religious lessons are popular among residents. Hawary also plays a key role in conciliating between local tribes.

Area residents suggest that Nour’s popularity has dwindled from its peak during Muslim Brotherhood rule in 2012, though. Its approval ratings took a hit when the party allied with the military following the June 30, 2013 protests that prompted former President Mohamed Morsi’s removal from power.

Nour might have a lessened influence in Amreya’s urban areas, but the party still enjoys strong support in the rural villages of Basra and Nahda. Ramy Kashwaa, coordinator of the Maspero Coptic Youth Coalition in Alexandria, says that’s because Salafis play a major role in resolving sectarian issues away from the courts.

Nahda was the scene of fierce sectarian clashes between Muslim and Coptic residents in 2012 that were triggered by an affair between a Muslim and a Christian, which led to the forced eviction of Copts from the village. A parliamentary delegation was sent to resolve the dispute, and Hawary played an influential role in the talks.

That same year, tensions escalated again when a Coptic girl disappeared and was rumored to have been forced to convert to Islam. Sources close to Hawary promised to return the girl, and delivered on that promise.

Nour also appears to have a strong presence in Borg al-Arab, where economic factors may again be key to the party’s popularity. Houda Ragab, a member of the district council, says that at least 20 percent of the total population here falls in the lowest income percentile. Ragab, who is also a social worker, believes that poverty is the district’s major challenge.

In addition, Borg al-Arab is a remote district whose seclusion allows Salafis to freely promote their ideas away from state eyes, she says.

Nonetheless, it remains to be seen how those strengths will play out in an election dominated by powerhouse mega-coalitions. The Nour Party was sidelined during the political scramble to form alliances and electoral lists, and will stand alone on the ballot.

As area resident Salama al-Mahalawy, 50, points out, the constituency is huge, and in the end “the competition is between candidates with money, and candidates with religion.”

AD
You Might Have Missed
Carbon Colonies & A Green New Deal
Where do old lesbians go to die?
What we talk about when we talk about trees
Mugamma revisited: Reimagining the building and the square
AD
Ahmed Badrawy
4 articles on Mada