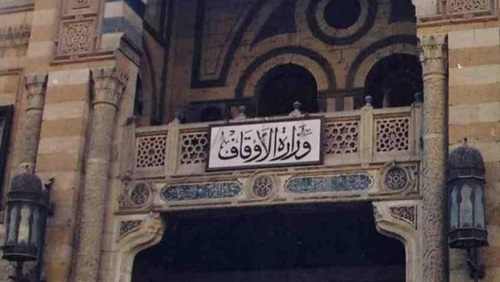 Police forcefully dispersed a sit-in by over 1,200 workers from the Ministry of Religious Endowments in the early hours of Monday morning outside Abdeen Presidential Palace.

The workers were demanding full-time contracts to reflect the hours they work, and the reinstatement of several thousand colleagues who were sacked by ministerial officials in recent months, among other demands.

One of the protesters, Sabry Shehata, told Mada Masr that riot police were deployed around midnight. By 12.30 am they were using batons to beat those who refused to evacuate the protest site.

The demonstration reportedly began at around 9 am on Sunday outside the headquarters of the Ministry of Religious Endowments in Downtown Cairo. After getting no response from ministerial officials, protesters relocated to Abdeen Presidential Palace, just a few blocks away from the ministry.

The plan was reportedly to carry out an open-ended sit-in until state officials met their demands.

Shehata said it was clear that police wouldn’t tolerate the protest outside the palace, even though they weren’t obstructing the street. “We had congregated in a grassy area by the side of the road and weren’t blocking traffic.”

Police officers told workers they didn’t have authorization to protest, let alone to protest outside one of the presidential palaces.

Several workers suffered from bruising after being beaten by riot police. But security forces didn’t use teargas, rubber bullets, or water cannons, and no arrests were reported, as has been the case with other recent protests.

Shehata asserted that their demands were professional and not political. “We have been employed by the Endowments Ministry for years without full-time contracts, despite the fact that we work full-time, six days a week. Many of us have been working on a full-time basis for five or six years, on temporary-work contracts.”

This means Endowments Ministry workers are effectively deprived of the minimum wage (a meager LE1,200 per month), job promotions, periodic bonuses, and comprehensive insurance coverage, among other basic rights.

Shehata, who has been employed as a custodial mosque worker for the Giza authority of the Endowments Ministry for six years, said he earns LE600 per month — half the minimum wage.

“I don’t have enough money to feed or clothe my two children,” he stated, adding, “I can make sacrifices and cut my own expenditures, but are my children supposed to go hungry too?”

Workers employed by the Endowments Ministry in the governorates of Beheira, Kafr al-Sheikh, Alexandria, Giza, and Gharbiya joined the sit-in with similar demands.

Hundreds of workers who had been fired from their jobs in Alexandria participated, demanding that they be reinstated. An estimated 4,000 workers were reportedly fired by the ministry’s authorities in this Mediterranean governorate.

Local media reported that the Endowments Ministry has incurred over a billion Egyptian pounds worth of debt to insurance companies, which may have led officials in Alexandria to make such a large number of redundancies.

Mohamed Hassan, a former worker at the ministry’s department in Alexandria, explained that he and nearly 400 other workers were fired in November 2014. As a mosque custodian working full-time on a part-time contract, Hassan said his total monthly wage amounted to just LE750.

“We were laid-off nearly a year ago, and haven’t been paid since then, as we didn’t agree to sign documents to forfeit our overdue bonuses, which we hadn’t been paid for over five years. We were punitively sacked, as we refused to be stripped of our rights.”

According to Hassan, officials explained that they couldn’t make the payments due to the large amount of debt the ministry owed.

“Our insurance payments were being deducted from our wages each month. Yet when we asked about our insurance policies, the ministry claimed we had none. So where has all this money been going?”

Hassan added: “Ministerial officials have repeatedly ignored us. It is on this basis that we sought an audience with the presidential spokesperson at Abdeen, but to no avail.”

The Ministry of Religious Endowments reportedly employs some 15,000 workers nationwide.

Several workers filed a collective lawsuit against the ministry and its employment policies, claiming they violate Egypt’s basic labor provisions. The Administrative Court is scheduled to examine these claims on November 1.

Shehata added that the state-controlled Egyptian Trade Union Federation has not supported workers in their quest for fair employment rights.

Topics
Related
civil service law
Workers protest civil service law in one of biggest street actions since 2013
Jano Charbel | Thousands of public sector workers took to the streets on Monday in protest against the civil service
labor law
Court forces 4 more workers into retirement for striking
The Supreme Administrative Court ruled against another four workers on Saturday, permanently dismissing
Endowments Ministry
Endowments Ministry to annex all mosques
The minister of religious endowments instructed officials to bring all mosques under the umbrella of