Do we really have big government?

During the ongoing debate over the civil service law, President Abdel Fattah al-Sisi asked in a televised interview whether the size of the state administrative apparatus is normal and appropriate for a state of Egypt’s size.

He also spoke about how during the years since the 2011 revolution there has been increase in wages and a growing number of civil service employees, attributing what he sees as inflated growth to narrow “sectoral demands.” Sisi pledged the new civil service law would not affect the size of the current government labor force or their wages, while at the same time  expressing his dissatisfaction with the size of the bureaucracy.

Anyone who follows government rhetoric on civil bureaucracy will notice a focus on one central idea: the total amount of wages for Egypt’s government workers is exceptionally high and is the primary reason for the budget deficit. The persistent stress on this point has stoked suspicions among those subject to the civil service law that the law’s main purpose is to reduce this heavy burden on the state budget, either by getting rid of workers or cutting their wages.

In addition to the official view of the public wage bill, numerous commentators, media figures, experts with international institutions, donors, and even public opinion believe that the size and cost of the Egyptian civil service is exceptional or catastrophic.

This view is also held by political scientists, who point to bureaucratic bloat to try to explain the floundering of democracy. Huge numbers of citizens depend on the authoritarian state to create jobs, the argument goes, thereby undermining democratic reforms. This view is also common among revolutionary forces that see civil servants as largely conservative members of the ”couch party”— a term that refers to people who stay on the couch without taking political action – which failed the revolution over the last four years.

There are no confirmed numbers of the current size of the public workforce, but the latest data available on the website of the Central Agency for Regulation and Administration shows that in 2010, the government employed 5.6 million workers. That number is likely larger now, with the press reporting than an additional 900,000 workers were hired after the revolution.

Meanwhile, in absolute terms, the civil service wage bill more than doubled over the past five years. According to official figures, wages increased from LE85 billion in the 2009/10 financial year to LE178 in 2013/14. However, wages of government employees as a proportion of public expenditure have only increased by around 2 percent in the past five years; they rose slightly from 23.3 percent of spending in 2009/10 to 25.4 percent in 2013/14.

In other words, the increase in public wages was not an outlier, but simply part of the more general trend of increased government spending.

So yes, the total wage bill has increased in absolute numbers and as a proportion of total public spending and GDP.

But the question that should be asked is this: Is this proportion high compared to other states? Do we really have an inflated government workforce?

A study conducted by the International Monetary Fund in 2010 assessed the size of the public labor force in terms of cost as a percentage of the state budget and GDP, as well as its size in proportion to the population. In general, developed countries have large governments, while developing, poor countries have smaller ones. That is, developed market economies rely on a sizable government apparatus, especially in education and health.

Egypt is categorized by the World Bank as a middle-income country. With labor costs equivalent to 8.9 percent, its spending is close to the average for countries with similar economies.

Measured as a percentage of the public spending, the wages of government employees comprise 28 percent of the budget in high-income countries, 31.8 percent in middle-income countries (like Egypt), and 25.8 percent in low-income countries. Compared with these states, and even considering the hike in the overall wage bill after the revolution, Egypt is lower than average, with wages accounting for 25.4 percent of public expenditure in 2013/14. 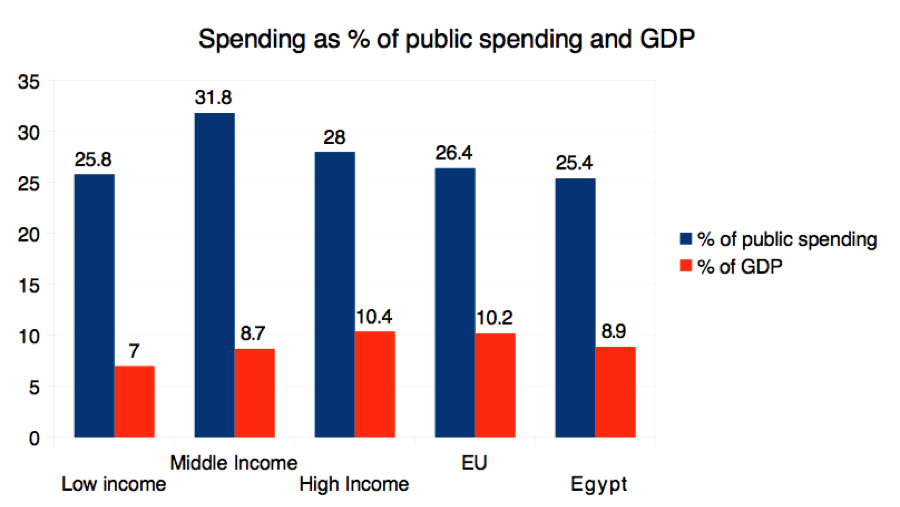 Spending as a percent of public spending and GDP

What can we conclude from these simple numbers? First, a market economy does not necessarily mean less spending on the government workforce. In rich, developed states, it does not entail a lower wage bill either as a percentage of GDP or total public spending.

Second, the high cost of government wages, in and of itself, does not constitute an obstacle to economic development. In fact, the most developed countries spend the most proportionally on the government workforce.

Third, the cost of the civil service in Egypt is not exceptionally high when compared to other countries of various income levels.

The reader may object: Maybe the cost of the government workforce is low due to the relatively low wages of civil servants compared to other countries. Perhaps if we looked at the size of the bureaucracy in proportion to the population, the picture will be different?

Table 2 shows that government workers in Egypt comprised 7.11 percent of the population in 2010, while the average in middle-income countries is 5.3 percent. So yes, the rate is higher in Egypt than in other middle-income countries, but it is lower than the average in EU countries, which comes to 7.9 percent, and even than a hyper-capitalist country like the United States. There are more government workers per capita in the United States, despite perpetual rhetoric about the “socialist” legacy of the Nasserist state, where the state is the primary employer. 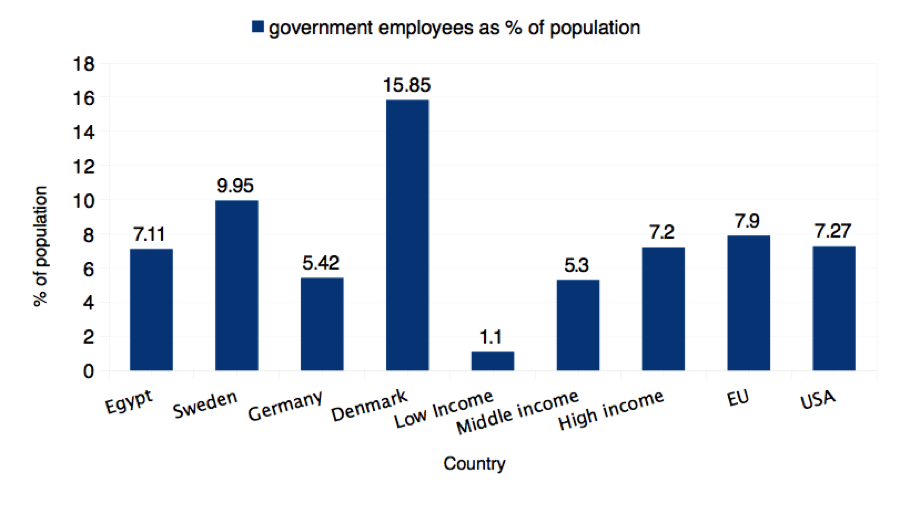 government employees as a percent of the population

I do not intend to argue that the structure of the government workforce in Egypt is without problems. However, I contend the nature of the problem is not the size or cost of that workforce, but rather its poor efficiency and distorted structure.

The number of doctors per 1,000 people or the ratio of teachers to students is still much lower than in other countries. In fact, we may need to increase spending on government workers, not to cut it.

Even if we were to cut the numbers of government workers, we would need to increase their wages. A pay increase is a precondition to any meaningful talk about efficiency and it may compensate for, or even go beyond, savings made by reducing the overall size of the workforce.

The most important conclusion is this: If we want to reduce the state budget, we need to look for solutions aside from “reforming the bureaucracy.” We shouldn’t confuse the agenda of administrative reform with neo-liberal austerity programs. Instead, we should think about how to increase tax revenue and combat corruption and waste to address the deficit.

Reforming the structure of the government workforce and increasing its efficiency is a necessary task, but it is less a fiscal problem — how to reduce wages to reduce the deficit — than an issue of democratic oversight of the distribution of the government workforce, the identification of local needs and the creation of a climate that permits accountability and responsibility. The government labor force must be changed incrementally, based on collective bargaining and a long-term vision for development.

AD
You Might Have Missed
Mugamma revisited: Reimagining the building and the square
What we talk about when we talk about trees
Where do old lesbians go to die?
Carbon Colonies & A Green New Deal
AD
Ashraf Hussein
1 article on Mada