The archive of the state-owned Ahram newspaper, which Mada showcases on the anniversary of the October 6 War, shows how the war was a turning point after which the Palestinian cause was dropped from Egypt’s priorities, following decades during which it was central in Egyptian state rhetoric.

Before the war, official Egyptian rhetoric continuously asserted that liberating all occupied land is the priority. President Anwar al-Sadat famously did so in a speech in front of the Central Committee of the Socialist Union and the parliament in September 28, 1973, on the third anniversary of the death of his predecessor, Gamal Abdel Nasser. The president pledged to continue the fight that Nasser begun, as reported in Al-Ahram’s issue the next morning. 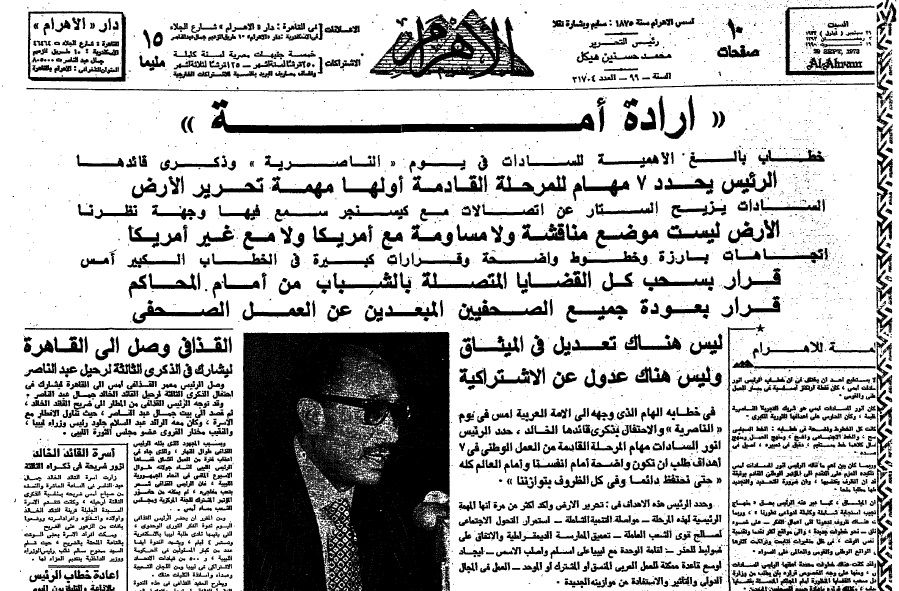 In its September 30 issue, the newspaper celebrated the success of an attack by Palestinian militants on a train in Austria, which was carrying Soviet Jews on their way to cross to Israel.

However, with the start of the fighting, the newspaper with the widest circulation in Egypt and the closest to the ruling elite, was void of any mention of the Palestinian cause in the three days following the crossing of the Egyptian forces to the East bank of the Suez Canal on October 6, 42 years ago. Al-Ahram’s coverage did not mention the fate of the fight with Israel and whether it would lead to the liberation of Palestine, as per the president’s pre-war speech.

For example, its October 7 editorial, “The decision.. and the men,” stressed two points. The first was the bravery of the decision, claiming that “Anwar Sadat was in one of the greatest and most dangerous moments of his life yesterday as he made this decision to face the challenge and meet the danger. He has the right to feel that every person in this nation knows the depth of the experience that he went through and his bravery in claiming the responsibility for the decision.”

The second point — expressed by Al-Ahram or rather, Mohamed Hassanein Heikal, who was its editor-in-chief at the time — is “the bravery of those men who carried out the decision.” Despite asserting that “these men don’t carry only the burden of the future and fate of Egypt but also that of the entire [Arab] nation,” it did not mention the Palestinian cause which was pivotal to the Arab-Israeli conflict.

The headlines of the first page were strictly news, albeit with an enthusiastic undertone, reflected in headlines such as, “Our forces crossed the canal and stormed the Bar Lev line,” referring to the Israeli defense line, “Night artillery battles in Sinai after the success of the grand battle,” and “The Syrian forces on the northern front penetrated the Israeli lines in several locations and continue their advancements in the Golan,” and “News of the battle in Israel are few and the correspondents’ dispatches undergo heavy censorship.”

The third page contained a continuation of some of the stories on the first page in addition to more news on the war, the situation in Israel and on the Jordanian front.

On the same page it published a statement from Syrian President Hafez al-Assad issuing words of encouragement but no clear idea of the future of the war or its supposed goal to liberate all Arab land. Assad’s statement read, “Our people who are overcome with enthusiasm stand behind you as one, protecting your back and supporting your efforts with all it has along with the whole of the Arab population which stands by you as nationalistic duty entails, and which is crucial for our present and future.” Assad made reference to historical religious and Arab figures but did not mention the liberation of Palestine.

There was little space in Al-Ahram’s pages that day for analysis, whether on the war or otherwise, as it appears significant space was reserved for advertisements and the commercial and entertainment sections.

Short analysis pieces made their way into Al-Ahram the next day, October 8, such as “Our forces use initiative against the enemy” by Abdu Mubasher, “A battle we fight with honor” by Mohamed Abdel Moneim, “Releasing the giant from hiding” by Mohamed Sayed Ahmed and “Legends shaken” by Gameel Matar.

Palestine made an appearance in a small news piece “Analysis of the situation” by Ashraf Ghorbal, press advisor to the president. The piece included a condemnation of Israel’s policies and its refusal to adhere to “the global demands for its withdrawal from occupied Arab lands and the return of the rights of the Palestinian people.”

A letter from the Secretary General of the Arab League Mahmoud Riad, published on the fifth page, mentioned the retrieval of “the Palestinian people’s usurped rights” as one of the goals of the war, with little elaboration. Sadat’s letter to Riad reported on in the same story, on the other hand, made no mention of Palestine and its people. Neither did it mention events that took place prior to Egypt’s 1967 military defeat in what could be read as an early sign of the his administration’s goals in the ongoing war.

Sadat said in his letter, “Israel has adopted a policy of continuously challenging global public opinion since the 1967 war and especially since the ceasefire implemented in August 1970 …ruining all initiatives and peace efforts built on the Security Council’s resolution passed on November 22 1967.”

Palestine reemerged in a minor way on the pages of the next issue of Al-Ahram, on October 9, in a short letter from Fatah movement founder and leader of the Palestinian Liberation Organization Yasser Arafat which included congratulations for the liberation of Egyptian land from the Israeli occupation and a pledge that Palestinians would fight hand in hand with the Egyptian and Syrian armies. The letter ends with, “May God guide you to achieve complete victory and liberate the occupied land, march ahead and may God be with you.”

Even the call directed by General Commander of the Egyptian Armed Forces at the time, Ahmed Ismail, to the Egyptian army, which was published in Al-Ahram’s fifth page with the headline “You have crossed the biggest hurdle, march on on the path of victory with god’s blessing on the path to victory,” didn’t specify what constitutes the end of that road. He only asked his “ sons and brothers” in the military to “defeat the Israeli enemy and destroy the myth that Israel is an undefeatable state.”

This article is published in collaboration with 7iber website.

AD
You Might Have Missed
Where do old lesbians go to die?
Carbon Colonies & A Green New Deal
What we talk about when we talk about trees
Mugamma revisited: Reimagining the building and the square
AD
Beesan Kassab
42 articles on Mada

Topics
Related
Al-Ahram
Egyptian media isn’t taking prisoners, state’s line is only line
Heba Afify | The country’s media apparatus is displaying an iron-willed determination to uphold the state narrative.
military
Asleep at the wheel
Iman Hamam | The line was here. No. Here. No. We crossed. We crossed. They crossed. We switched sides. That’s what
archives
Palestine as archive
Sherene Seikaly | A man and his young son sit on two cement blocks, surrounded by piles of rubble that were once their
Cyprus
Lotus Notes: Part Two B
Nida Ghouse | “There is no god but God!” gave way to more passionate and perverse political refrains: “No more