Rage pours forth after Egyptian assaulted in Jordan, but systemic abuse of expats largely ignored
By
Mada Masr 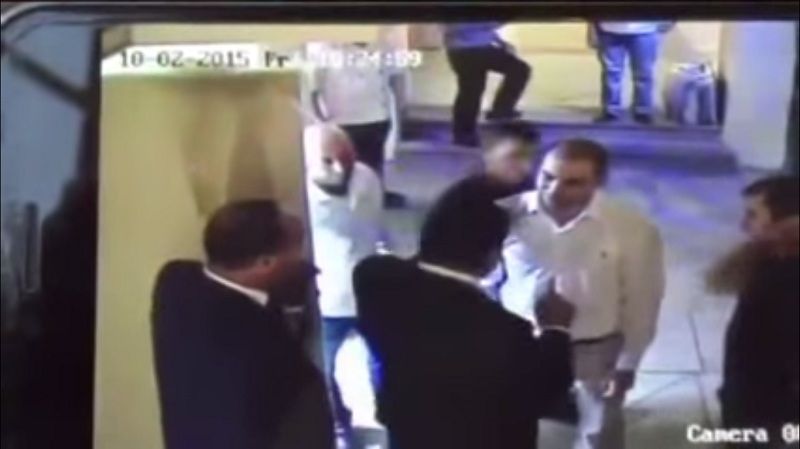 Egyptians were outraged when a video circulated on social media showing three Jordanian men assaulting an Egyptian waiter, prompting authorities to take immediate action that led to their arrest on Monday. But some analysts worry that many Egyptians living in more economically strategic countries — and even at home — routinely suffer human rights abuses that elicit no comment.

The video captured Jordanian Member of Parliament (MP) Zayd al-Shawabkeh reprimanding Egyptian waiter Khaled Othman for poor service as members of his entourage took turns beating him at a restaurant in the coastal city of Aqaba, the state-owned newspaper Al-Ahram reported.

Othman told the privately owned satellite channel Al-Hayah that he had served the MP the day before the video was shot, and the official insulted and threatened him because his order was late. The waiter said the restaurant manager intervened to resolve the issue, but the MP returned the next day to attack him.

The Egyptian Foreign Affairs Ministry issued a statement Sunday night saying its consulate in Aqaba was closely following the incident, and Egypt’s ambassador to Amman had contacted the head of the Jordanian parliament to demand that the perpetrators be brought to justice.

The consulate also filed a police report and hired an attorney to “ensure that the Egyptian citizen gets his legal rights,” the statement read.

Ambassador Khaled Tharwat visited Othman at the hospital where he was being treated after the incident.

“It is unacceptable for any Egyptian citizen in Jordan to be insulted,” Tharwat told Al-Hayah. “We will not leave him until he gets his rights.” The consulate always stands by members of the Egyptian diaspora, he added.

But in fact, that typically is not the case, according to Mohamed Zaree, head of the Cairo Institute for Human Rights Studies (CIHRS). He told Mada Masr that he welcomed the action taken by the Egyptian consulate in this case, but the government’s response to such abuses should be systematic across the board.

“Is there a general policy to look after Egyptians abroad?” Zaree asked. “The answer is no. This is linked to the fact that the government doesn’t look after its citizens inside Egypt. If something happens to you and you try to call the police, no one will help you.”

Similarly, diplomatic staff abroad operate under the idea that “we are a government, whether you like it or not, and we don’t need to offer any services,” he argued.

There have been no official attempts to challenge Saudi Arabia’s widely criticized policy requiring Egyptian laborers to obtain a local sponsor to work there, Zaree pointed out, while Egyptians returning home from war-torn Libya and Yemen have largely done so “by their own efforts.”

“’We’re 90 million people, there’s no problem if some of us die.’ This is the government’s concept,” he said.

In addition to the official response, the video also sparked outraged commentary on Egyptian television and social media. On his talk show, TV anchor Wael al-Ibrashy reprimanded Shawabkeh during a phone interview .

The remorseful MP said that the incident was a blow not only to Egyptians, but the Jordanian people as well, as the attacker who took the first swing was his own brother.

But Shawabkeh claimed the assault was “an individual act and had nothing to do with [Othman] being Egyptian.”

In response, Ibrashy lambasted the MP and his entourage, calling them a “group of thugs.”

“You cannot be a representative of the people,” he told Shawabkeh.

A hashtag that translates as “Jordanian MP hits Egyptian worker” began trending on Twitter, where commentators decried the blow to Othman’s dignity and called for justice.

Zaree attributes the widespread outrage to the fact that the incident was caught on video, so was hard to ignore.

Furthermore, Jordan doesn’t offer Egypt any aid — as is the case with Saudi or the United Arab Emirates — so there’s little risk that the outcry would jeapordize important economic relations, he asserted.

Some social media users also questioned the anger around the Othman video, given that numerous videos showing Interior Ministry human rights violations have been met with relative silence.

For example, Zaree described a video that surfaced last August showing a low-ranking police officer beating a young man on a metro platform while he was held down by two other policemen, one of whom was plain-clothed.

The officers in the video were reportedly referred to investigation, but Zaree said that the reaction, if any, to such incidents is short-lived due to a “political decision” that guarantees Interior Ministry impunity.

Topics
Related
Saudi Embassy
As officials fall short, volunteers lead the search for missing pilgrims
Families of the victims of a catastrophic stampede in Mecca last week are decrying the lack of state
Egypt-Libya relations
Egyptians in Libya: A timeline
Pesha Magid | Since the first oil boom of the mid-1970s, Egyptian laborers have flocked to Libya as a result of both