Sisi in New York, but not DC 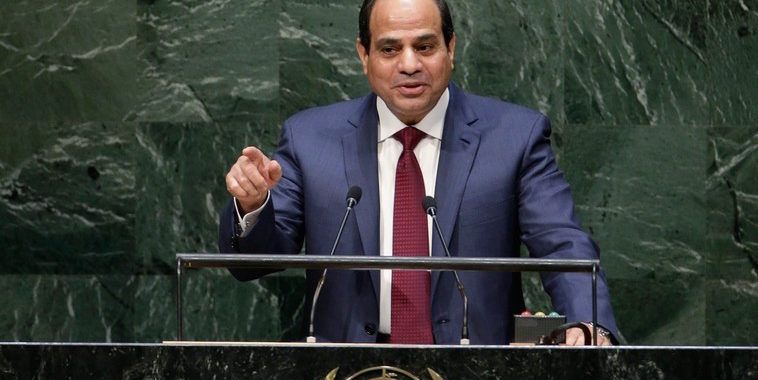 Egypt’s foreign minister has announced that President Abdel Fattah al-Sisi will not go to Washington during his trip to the United States this week, as commentators speculate on the health of Egypt-US relations.

Sisi flew to New York on Thursday to attend the 70th session of the United Nations General Assembly. Rumors that Sisi is avoiding Washington due to the White House’s ties to the Muslim Brotherhood have been denied by Foreign Affairs Minister Sameh Shoukry, state-owned Middle East News Agency (MENA) reported Thursday.

Shoukry told MENA that a trip to Washington had been planned, but then had to be delayed due to the recent Cabinet reshuffle. Sisi will therefore not be arranging a special meeting with US President Barack Obama, who will be busy welcoming the dozens of heads of state attending the current General Assembly session, he added.

This is Sisi’s second trip to New York since he was elected president last year, but he has yet to visit DC. In September 2014, he led the Egyptian delegation at the General Assembly’s 69th session, where he pushed to assert Egypt’s important role in fighting terrorism and sidelined criticism of the manner in which he came to power on the heels of the military-led ouster of former President Mohamed Morsi.

Sisi struck a similar note on his second visit when he addressed the General Assembly on Friday.

He first outlined Egypt’s achievements over the past two years, including the New Suez Canal and the Egypt Economic Development Conference in Sharm el-Sheikh this March, then argued that stability in Egypt means stability for the entire region.

Egypt participated in drafting a new international development agenda, which included “unprecedented goals” to end hunger and poverty and boost healthcare and education, Sisi said. But he cautioned that Egypt may lack the tools needed to achieve such goals, especially given the challenges the nation is facing.

“The difference in capabilities and disparity in the level of development imposes a discrepancy in the burdens and commitments among members of the international community,” he asserted. “This places a responsibility on those who have the capabilities towards those who lack it.”

But according to observers in the US, there is an overriding lack of interest there in Egyptian politics.

Discussions about Egypt in the US “range from nothing, like Egypt doesn’t exist, to ‘well, it’s too bad what happened there, but at least it’s stable’,” Joshua Stacher, assistant professor of political science at Kent University and author of Adaptable Autocrats: Regime Power in Egypt and Syria, tells Mada Masr.

Nancy Okail, executive director of the Tahrir Institute for Middle East Policy (TIMEP), echoes Statcher’s sentiment, explaining that Egypt is not a priority in terms of US American foreign policy.

It is domestic politics that is driving foreign policy debate in the US, Okail explains, especially in the run up to the presidential election, with the focus now being the Iran deal and fighting extremism in the region.

Some observers interpreted Sisi’s pardon of 100 prisoners on Wednesday — including several high-profile activists and journalists imprisoned in controversial cases — as a preemptive move to curry favor at the General Assembly meeting, given the international community’s mounting criticism of human rights abuses in Egypt.

“Sisi releases activists and goes to New York,” read a Thursday headline in privately owned newspaper Al-Masry Al-Youm. Privately owned Al-Shorouk also combined the news of the activists’ release from prison and Sisi’s visit to New York in one article.

“Perhaps releasing the 100 people is just a ploy for the embassy to grab a headline or set an agenda. Maybe they can point to it if they are criticized. But even here, it’s a weak gesture,” Stacher says. “So maybe [the pardons] get an article in the New York Times, but there are no mentions on cable news.”

This lack of media coverage is believed to be a failure of the firms lobbying on behalf of Sisi in DC, an example of which is the United Arab Emirates-financed Glover Park Group.

“Selling Sisi in America on the cost of the Muslim Brotherhood is a modest task. Yet they miserably failed with  mainstream American media like the New York Times and the Washington Post,” says Mohamed Elmenshawy, a DC-based analyst focusing on Egypt. “The PR company is not able to twist the reality that it was a military coup that brought Sisi to power and the fact that he imprisoned the first freely elected president.”

The pardons may even be less of a sign of responding to international pressure. Elmenshawy thinks that Sisi’s move to pardon 100 detainees sends a clear message to the international community. “Do not try to pressure me, I will do it on my own schedule and based on my own calculations,” he says, imagining Sisi’s train of thought. “The international community recognizes its limited leverage with the Egyptian regime and Sisi succeeded in letting them appreciate any move to pardon people who were unjustifiably detained.”

For Okail, this is the product of international policy perceptions.

“Regrettably, the international policy perception in general is still trapped in the false dichotomy between stability on one hand and human rights and democracy on the other hand,” she says. “They wrongfully perceive the rise of violent extremism in the Middle East as an outcome of the Arab Spring rather than a symptom of long-standing authoritarianism and absence of justice.”

She refers to TIMEP’s Egypt Security Watch, which indicates that terror attacks are steadily on the rise, growing from an average of 30 monthly attacks in 2014 to 115 attacks a month in 2015.

“Unfortunately,” Okail adds, “Western leaders have not learnt from recent history that clearly demonstrates that stability in the absence of a just system, democracy and rule of law is extremely fragile and unsustainable.”

And with PR support, it should not be difficult to convince that Egypt is fighting the right fight. “[Glover Park Group]’s mission is easy with the ongoing war on terrorism inside Egypt and in the region in general,” says Elmenshawy. “When you are supported by the Israeli Lobby and Gulf money, your mission is easy.”

But even Egypt’s counter-terrorism efforts are failing to make headlines. “Not even the war in Sinai is grabbing many headlines in the mainstream press,” Stacher notes.

However, behind this seeming lack of interest in counter terrorism, the US is concerned about Egypt’s efforts.

In his recent policy recommendation to the administration, Eric Trager, a fellow at the Washington Institute, called on the Obama administration to continue “encouraging the Egyptian military to update its strategy against Sinai jihadists.”

Trager’s notes followed a militant attack on the Multinational Force of Observers in North Sinai in June, which did not incur any casualties. Then in early September, a bombing in North Sinai targeted four American peacekeepers. The attacks prompted some defense officials in the US to call for the withdrawal of American troops in Sinai.

“Washington is worried about Sinai,” says Elmenshawy. “They believe the Egyptian military action will not solve the problem of terrorism, and they are worried on their 700 troops with the MFO. Of course, there is also the Israeli factor. Washington does not have faith in the efficiency of the Egyptian military though it is a US-trained one.”

Elmenshawy added that even though a temporary delay on US arms supplies under lawmakers’ pressure followed the ouster of Morsi from power through a military-led coup, “The Egyptian military still enjoys strong relations with Washington. Although they froze aid for 18 months, the warm relations did not turn cold at any point.”

He says Washington has watched closely as Egypt brokered new arm deals with Russia and most recently with France. “Some people in the Pentagon are irritated by this news,” he says. “Being the sole provider of advanced weaponry to Egypt gave the Department of Defense the upper hand in handling  bilateral relations. Yet we need to remember that the new French deal entails transfer of equipment but not technology. And we should assume that the US and France talked to each other before the deal was concluded.”